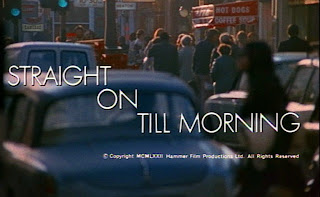 1972 was a banner year for movies about naive young women looking for love and finding it with a deranged serial killer.  And by "banner year", I mean I can think of two.  One of them is "The Folks at Red Wolf Inn", and now I've discovered another one.  "Straight on Till Morning" doesn't have any cannibalism, but it does feature a similar scenario of a somewhat childish young lady who wanders right into some psychopathic shenanigans and doesn't even realize it until it's way out of control.

Strangely, "Straight on Till Morning" is a Hammer film, yet it has nothing of what one would expect from a Hammer film--no Count Dracula, no spooky castle, no Christopher Lee, not even a single damn cameo for Peter Cushing. The studio must have been trying to evolve, as it was starting to leave period films behind and even began setting its Dracula films in contemporary times (this was the year of  "Dracula A.D. 1972"). I still wonder if they knew what they were getting into when they greenlit "Straight on Till Morning", which not only avoids the tone and visual tropes of most horror films, but also has the most ADHD visual style that I've ever seen outside of a Russ Meyer film. The director, Peter Collinson, frequently layers two or more scenes and then cuts back and forth between them in short bursts of dialog and visuals,  resulting in a fragmented narrative. The effect is strangely disorienting at best, and fucking irritating at worst. It's almost as if Collinson just assumed you'd be either stoned, tripping, or both when you saw this movie in a theater in 1972, and he decided to mess with your mind by twisting it and then trying to bend it into the shape of a soft pretzel.

Getting comfortable in this movie's world is out of the question, so the beginning of the film can be a bit of a mystery to the first time viewer. From what I was able to piece together later in the film, Brenda (Rita Tushingham) is a young woman living with her mother in a part of England that resembles a large prison complex, with no visible plant life anywhere. She is a little bit wacky, writing stories where she is a princess and is rescued by a handsome prince. She tells her mother she is pregnant, and because she's pregnant she must leave home and go to find a suitable father for her child. I'm not quite sure what sense this made at the time, but it turns out it doesn't matter--Brenda's not pregnant at all. After flying the coop, she insinuates herself into the local party scene and starts living with a young woman named Caroline (Katya Wyeth).
Despite her best efforts, the plain-looking Brenda can't get any real attention from anybody with a penis, so she resorts to doing what any other young woman who wants to get pregnant would do: she kidnaps a man's dog, with the intention to bathe it, pretty it up, and return it to him as a means of making his acquaintance.  Unfortunately for her, the man is Peter (Shane Briant), who happens to be a serial killer. It seems that Peter is also looking for love, it's just that he has a problem with pretty things: he kills them. When Brenda shows up at his door with his dog, he sees through her little ruse and gets her to admit right away that she wants to have a baby with him. Kind of like hiring a new maid, Peter tells her she can move in as long as she does all the cooking and cleaning, and we'll see about that baby. Oh, and he doesn't really know who she is, since she gives him a phony name and he decides to make up his own and call her Wendy. Since Wendy/Brenda's "not pretty", maybe she has a chance of being the love of Peter's life.

"Straight on Till Morning" is clearly not playing with a full deck. It's more like a demented romance, where strange motivations drive the characters in ways that are hard to relate to. Even though it doesn't make much sense, I really got into the way the story unfolded. The lack of any real graphic violence doesn't do anything to diminish the uncomfortable atmosphere the film generates, especially in the scene where Peter brutally kills his dog, which Brenda has unwittingly "ruined" by making it pretty. Flashbacks to Peter's other women reveal that he's done this many times before, which leads me to wonder where the hell he's getting rid of these bodies, and how the walls in his row house must be completely soundproof to mask all that screaming. Peter's homicidally crazy, but Brenda is a little crazy, too, so the lurid quality of the film is like watching two unstable people who are living in a fantasy world.

I wasn't certain if the downbeat story arc and twisted subject matter alone would make me consider "Straight on Till Morning" a 70s Doom film, but I knew for sure when I heard that title ballad on the soundtrack--YES, an actual 70s Doom song! There's also the crazy editing, which is either arty or eye-gougingly annoying, take your pick, but there's some interesting cinematography to look at. The outdoor city settings are bleak, and Collinson likes to film his subjects as far removed from nature as possible. You get the impression that the film's world is a never-ending wasteland of concrete, cookie cutter buildings, where only the interiors have any character at all. "Straight on Till Morning" is like an oddball person on the bus who sits next to you and starts talking whether you want like it or not. It invaded my space and made me uncomfortable at first, but I caught myself actually listening and wondering where the hell it was talking about.
Posted by GroovyDoom at 12:22 AM