Everyone's got their list of movies they would love to see restored and reissued on Blu Ray. With great companies like Scream Factory, Severin, Arrow, Vinegar Syndrome, Garagehouse and Code Red rescuing little-seen movies from total obscurity, it seems like anything is possible. So here's my wish list of titles that would make me scream. 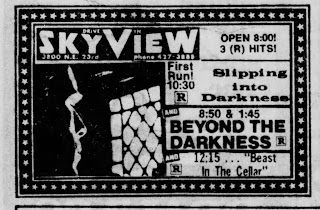 One of the most haunting performances I've seen in a film is the sensitive portrait Laszlo Papas creates of a troubled young man with a diminishing grasp on reality. Although heavily influenced by Psycho, the story really lays on the pathos in its grim depiction of the inner turmoil of its two main characters, played by Papas and Beverly Ross.  What Crazed lacks in polish is more than compensated for by its unflinching willingness to show its characters stripped of security and comfort. Most likely not the film that the viewer will expect, but a harrowing experience that should not be allowed to disappear.

Dream special feature: an interview or commentary with Laszlo Papas and/or Beverly Ross. 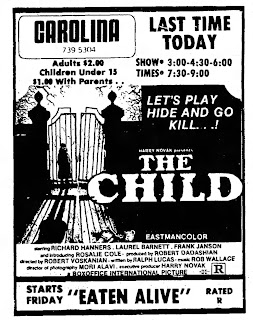 Carrie meets Night of the Living Dead via The Bad Seed is one way you could describe The Child, but that's not really giving this imaginative movie its due. The material is derivative, but the execution of the film is shockingly good, considering that it appears to have been cobbled together with scotch tape and a glue gun. Something Weird gave this a DVD release, and a Blu Ray could actually end up making this movie look even worse by revealing too much, but since this is a fantasy list, I'd love to see someone give this movie a good going-over with some digital equipment to clean it up as much as possible. Enhance the colors, do your best with the shoddy audio track, and especially clean up some of the visual noise that goes with the territory of filming a movie like this on cheap film stock. 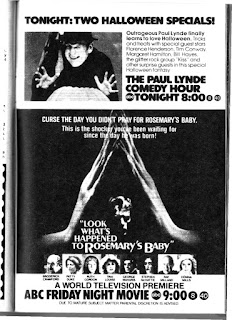 Made-For-TV sequel Look What's Happened to Rosemary's Baby is about as strange as they come. True, the film doesn't equal the original in any regard, and the story doesn't add up in a number of ways, but this full-speed-ahead whacked out movie is as groovy as burnt orange shag carpeting with an avocado couch. It's also got a memorable cast, including Patty Duke, Donna Mills, Ray Milland, Tina Louise, and Ruth Gordon reprising her role from the original film. It needs to be seen on Blu Ray.

Dream special feature: A few TV spots would be sufficient, although it would be far out to hear anybody from this production talk on camera. 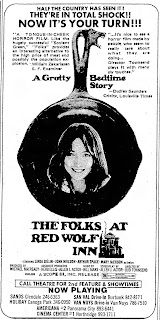 Is it any surprise this film is on my list? Code Red announced this as an upcoming title about 4 years ago, but it obviously never materialized, and rumor has it a decent print could not be located in order to create the HD transfer. I'm not sure if that's true, but this cannibalism classic is just dying to be rescued from obscurity with a proper restoration. 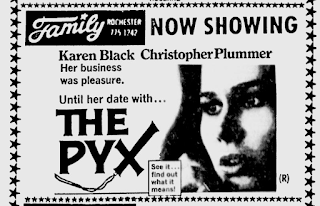 One of Karen Black's finest roles, she plays a prostitute whose suspicious death is under police investigation, and the story's unique framing device tells the tale in both flashback and present tense. The film's marketing materials made it look like a supernatural thriller, but it's more of a brooding crime drama than Omen-wannabe.

Dream special feature: Karen's original recordings for the songs featured on the soundtrack. 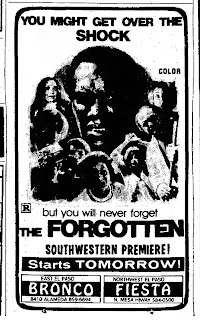 Where is the deluxe Blu-Ray presentation for this classic drive-in movie? S.F. Brownrigg's work needs to be exhumed and studied for its unique brooding quality, as well as its bizarre sense of humor. Basement is perhaps his best-known film, and it got its first HD presentation as part of a double disc package for the recent Don't Look In The Basement 2 home release. This print, however, was presented grindhouse style, with most of the grain and scratches intact. While I love that idea, I still won't be happy until we get a lovingly restored Blu Ray that gives the movie its due.

Dream special features: The various opening sequences featuring the film's numerous titles, particularly the original title The Forgotten (which would ideally be the print used for the transfer). 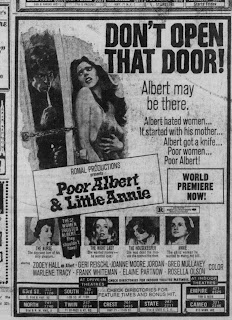 Originally released as Poor Albert and Little Annie, this nasty little movie was remarketed as a slasher and promoted by giving theater patrons an "upchuck cup" in case they experienced any stomach distress. What they probably didn't expect, however, was that their stomach distress would be caused by a depiction of an adult man attempting to "marry" an 11 year old girl he makes off with after murdering her mother. Zooey Hall's performance rivals that of Laszlo Papas from Crazed in its brutally realistic depiction of a likable young man being consumed by his dark side.

Dream special features: the original and retitled openings, and perhaps an interview with Zooey Hall. 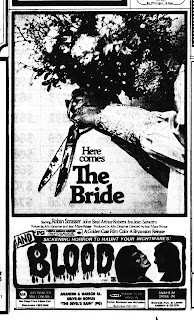 Prolific daytime TV actress Robin Strasser would probably prefer that this film be forgotten, but her performance as a neurotic young woman who has an epic meltdown on her wedding day is surely one of the more unique items on her resume. Although her screen time in the film is limited, she reaches levels of hysteria in her big scene that rival Faye Dunaway in Mommie Dearest. The Bride also features some unusual art direction, lighting and camera work, particularly the scenes that appear as dream sequences. A full exhumation of this obscure oddity would be great.

Dream special features: various retitled poster gallery or title sequences. If anyone could convince Robin Strasser to talk on camera about this, that would be spectacular as well.

EDIT: Apparently, Code Red has released this film under one of its alternate titles, Last House On Massacre Street! Get it here: 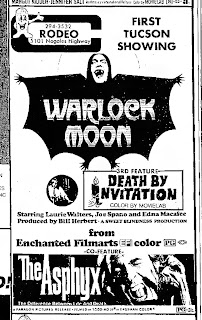 Another rarely-seen gem, this mixture of cannibalism, witchcraft and Satanic conspiracy is very similar in tone and presentation to The Folks At Red Wolf Inn, but has its own unique atmosphere with supernatural overtones. Laurie Walters is a young college student in trouble when her new boyfriend (Joe Spano) takes her on an adventure to explore an isolated abandoned spa. The location is everything here, with the brooding resort bringing out the best in the actors. One scene between Spano and Walters in an empty swimming pool is a tense moment that plays like improvisation, captured by a handheld camera for an authentic feel.

Dream special features: the complete version of the film, with the brief missing scenes that were omitted from the DVD release.

UPDATE: This has since been released on Blu Ray with the additional footage, get it here!! 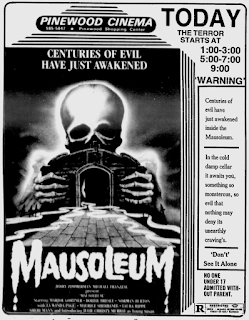 This fantastic early 80s monster freakout is all about Bobbie Bresee being either exposed in the nude or defiled with demonic makeup and appliances, the most alarming of which outfits her with a pair of killer breasts. No, I mean LITERALLY killer breasts, each with its own fanged mouth. Although it's played mostly straight, a few wink-wink moments reveal that the filmmakers were in on the joke, too. Marjoe Gortner and LaWanda Page also make this worth looking at. A Blu-Ray transfer would really make the film's colorful presentation pop.

Dream special features: Bobbie Bresee, naturally. She did a commentary for a DVD release, so she's not averse to talking about Mausoleum.

The out-of-print Code Red DVD for this 1970s "teenage Dr. Jekyll" screamer could use an upgrade to Blu Ray, hopefully one that will accentuate the movie's freaky lighting and color schemes.

Dream special features: the film's weird soundtrack on an isolated audio track, as well as interviews with Pat Cardi and Rosie Holotik. Don't forget to port over the interview with star Austin Stoker, or better yet, bring him back for a commentary with Cardi and Holotik. 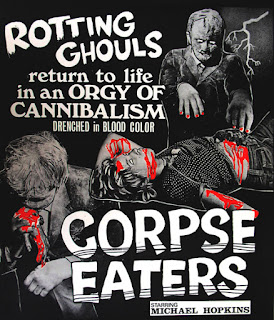 It goes without saying that a movie about zombies eating people may be inspired by Night of the Living Dead, but this ultra-obscure Canadian zombie flick also seems to be a direct descendant of Children Shouldn't Play With Dead Things. Created by a drive-in owner with the express intent to exhibit the film at his drive-in, this movie is unbelievably cheap looking and the scenes are often crudely realized by the actors, but holy moley is this thing weird and unusual. This may be the most unrealistic film on the list, since Corpse Eaters never really received any kind of official release outside of its original drive-in run, but who knows--maybe the fact that it was purchased by a disreputable distributor and then shelved means that there is at least one nice print laying around waiting for be scanned. This movie is in dire need of a Blu-Ray rescue.

Dream special features: Just seeing Corpse Eaters get a restoration would be a dream in itself. 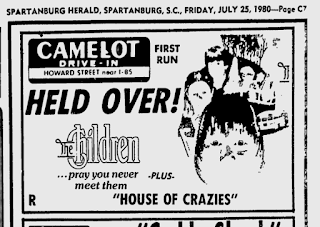 A leak at a nuclear power plant creates a cloud of noxious yellow gas that drifts across the New England countryside; when a school bus drives through it, the children on board are all transformed into murderous zombies that have the ability to burn their victims alive in 15 seconds with the touch of their hands. Although played with a straight face, there are plenty of winks in the film regarding its cynical, satirical statement on familial dysfunction and parenthood gone wrong.  Troma issued a horrible looking DVD that somehow didn't even look as good as the VHS release. Someone really should clean this up this memorable trash classic and give it a definitive release.

Dream special features: an isolated track with Harry Manfredini's score, which is very similar to Friday the 13th.
Posted by GroovyDoom at 6:01 PM 1 comment: