Night 2 at the Riverside Drive-In! 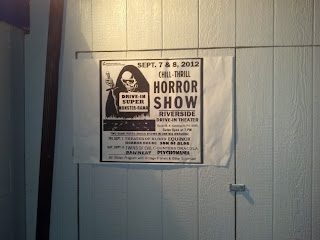 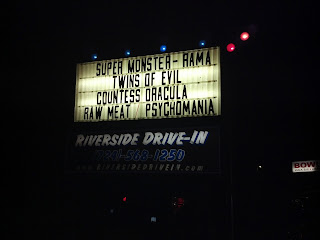 The 2012 Super Drive-In Monsterrama has come and gone, and what a tombstone-cold blast it was.  (That's my best Forrest J. Ackerman impression.)  The lineup for the second night was just as strong as the first, featuring two classic Hammer flicks I've never actually seen until now.

"Twins of Evil", the third film in Hammer's "Karnstein" trilogy, unspooled first, and they had me at "Peter Cushing". Cushing plays a pious witch hunter who likes to accuse innocent girls of being in league with the devil, burning them alive, yet somehow lacks the courage to confront Count Karnstein, the obvious vampire living in the spooky old castle on the hill.  Maria and Freida are orphaned twin sisters who find themselves threatened by the Count; when Freida falls victim to the dark side and is discovered to be a vampire, she and Karnstein try to trick the "witch hunters" into burning Maria instead by having her swap places with Freida. 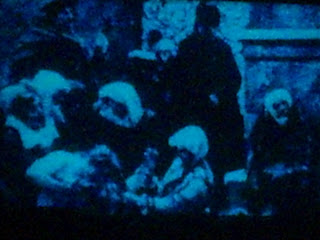 "Countess Dracula" was my surprise favorite of the evening. As a kid, I was never lucky enough to catch it running on TV, and when I read in the monster mags that she wasn't really a vampire in it, I guess I kind of wrote it off and felt like my childhood was ruined. But it's actually a compelling story of a Countess who discovers that when she gets a young virgin chambermaid's blood on her skin, she starts to look young again. We never really know why this is happening, or if it would happen to anybody who touched some virgin's blood, but pretty soon she's killing young girls and bathing in their blood. With the help of her longtime lover, she sets up a steady blood supply and schemes to take the place of her own daughter, winning the love of a much younger man and arousing the jealousy of her own lover.  I thought it was great seeing how the Countess becomes more and more obsessed with the idea of remaining young, so much that she doesn't even care that someone else has to die in order for her to do it.

"Raw Meat" was the third feature, and the print we saw carried the original title "Death Line".  If you haven't seen this one, it's a somewhat erratic 1973 British thriller starring Donald Pleasance as an inspector on the case several disappearances in a particular area of the London subway.  What it takes him the whole movie to find out is that there is a homicidal maniac loose, the last descendant of a group of workers who were trapped in the tunnels after a cave-in occurred during the construction. The builders of the subway left them for dead and abandoned that section of the tunnels, forcing the survivors to resort to cannibalism in order to stay alive. The last deranged survivor has managed to find an opening through which he can emerge to claim more "food". While the movie is grisly enough in theory, and there are numerous rotting corpses on display in his bizarre underground lair, the pacing of the film is a little sparse and "Raw Meat" was a good time to make a few trips to the concession stand. 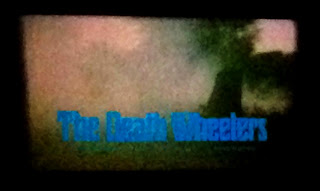 The main event for me was "Psychomania", showing here under the original title "The Death Wheelers".  This insane feature was always on cable TV when I was a kid, usually showing late at night when I should have been in bed.  "Psychomania" is about an obnoxious motorcycle gang called "The Living Dead" that seems to be comprised of snotty English rich kids who do badass tough things like physically assault young mothers and babies.  The gang's leader, Tom, just happens to come from a family involved in Satan worship; his mother is a medium who happens to understand the secret of surviving death. Apparently, all you have to do is believe you'll come back from the dead, and you will. Tom commits suicide, the rest of the gang burying him upright while he's still sitting on the back of his bike, and later he comes roaring out of the grave, good as new. The rest of the gang starts to do it, too, and pretty soon they're all dead and loving it, except for Tom's girlfriend Abby. Being the lone holdout, the movie wants us to care what happens to her, even though she is in love with a man who runs babies over with his motorcycle. Eventually Tom's mother decides enough babies have been harmed, so she revokes her deal with the devil and suddenly Tom and the other really-dead Living Dead members are finally really dead, immediately being covered with dirt and turning into dirt hills.  Wowzers!

I have to admit, if there was a drive-in festival like this every month, I'd probably attend. I love going to the drive-in, I just usually hate movies that were made anytime in the last 25 years. Who wants to go to the drive-in to see "Transformers 6"? No, drive-ins were destined to show movies like these, and as long as the Super Drive-In Monsterrama keeps rolling, I'll be on board. See ya next year, Riverside Drive-In! 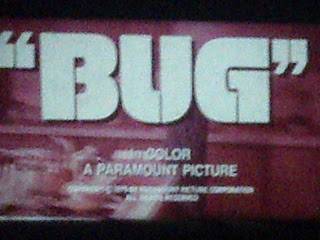 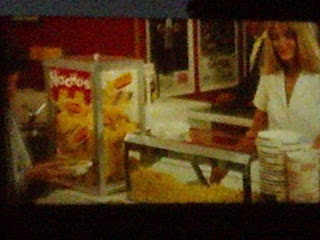 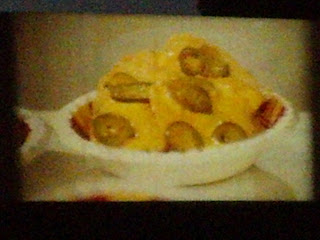 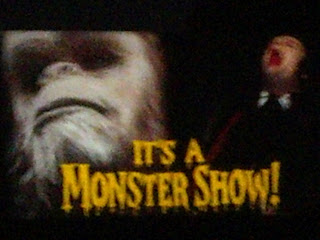 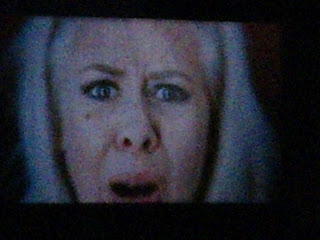 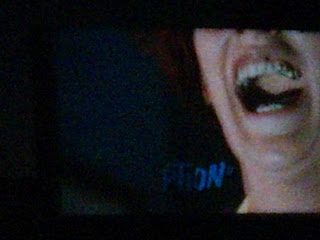 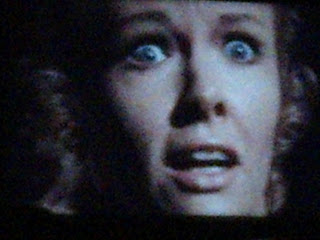 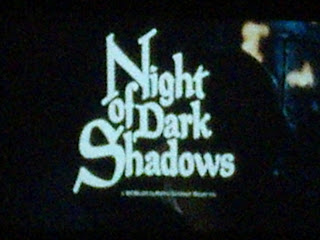 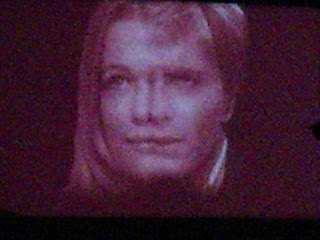 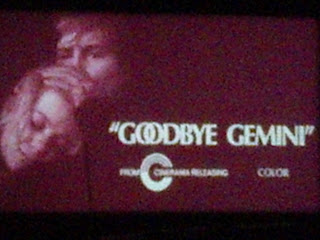 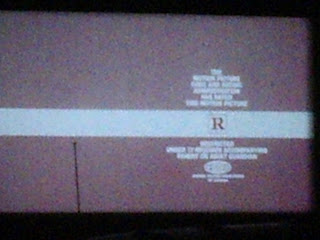 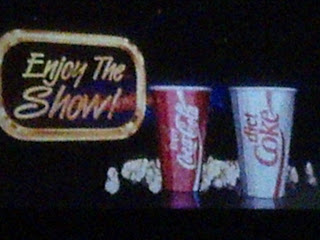 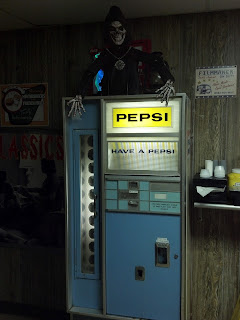 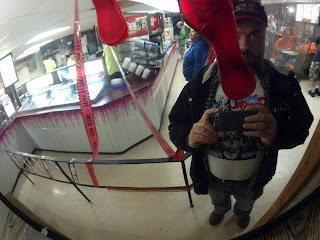 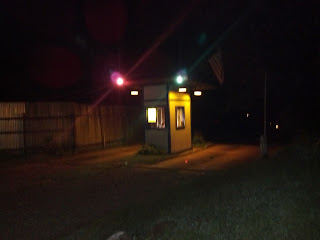 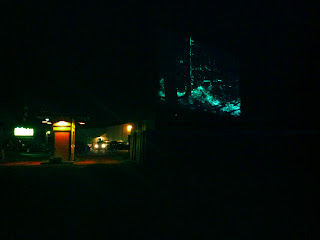 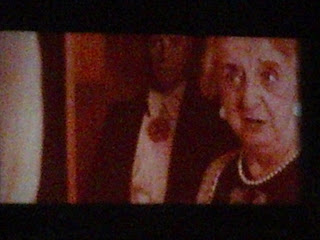 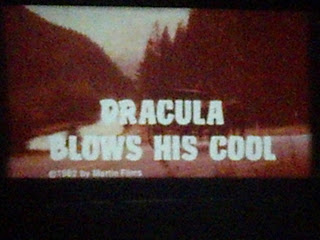 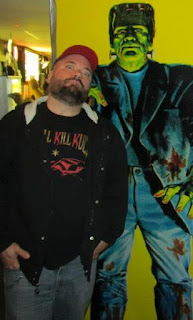 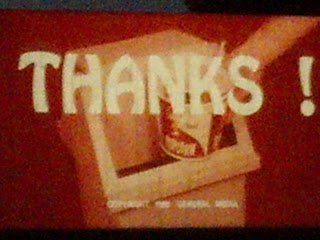 Posted by GroovyDoom at 3:29 PM