These are the things you need to know about "Contamination": 1) It involves a conspiracy to take over the Earth by making everybody explode by way of green avocado-like eggs. 2) The purveyor of this invasion by egg is a giant one-eyed creature who lives on a coffee plantation. 3) People explode in it. That's all you need to know, really. If you are in the mood for a true gorefest, this is not it, because aside from a few exploding body scenes, the majority of this movie's action scenes involve people talking, taking showers, and shooting at one another on a coffee plantation. Do not expect space shenanigans either, because aside from a brief scene shot inside a cave (standing in for the planet Mars), none of the action takes place in space. There's half of an enjoyable schlocky movie here, and half of an utter bore, but it's worth seeing at least once just to take in the sheer absurdity of the whole thing. 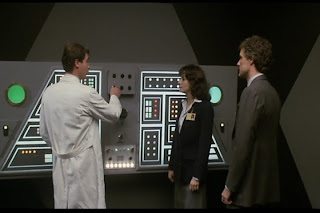 "Pardon me while I turn this very important knob."
(This is what high-tech control panels built by the government look like.)

The movie opens when an unmanned boat drifts into New York Harbor. "But wait," I can hear you saying. "You're talking about Lucio Fulci's Zombi 2, right?" Well no, "Contamination" opens the same way, disbelievers. Authorities board the boat and discover that it contains a bunch of dead bodies that look like they've been run over a few times with a lawn mower. Men in hazmat suits board and find...crates of coffee! But unfortunately, the coffee is simply hiding the true contents of the crates: a horde of green football-sized eggs that look like giant avocados. They make strange humming noises and, when touched, explode in a shower of green goo. But the worst is yet to come. The green goo causes any living material that it touches to explode! So your Contamination 101 lesson for today, class: first you touch the egg. Then the egg explodes. Then YOU explode. Multiply this by every living person and thing on the planet, and...well you would need a lot of eggs for this. Not only that, you'd think that by the time ordinary people on the street started exploding due to the green eggs, the word would get around pretty fast and nobody would touch the strange, green eggs they might find in unexpected places. Now I know what you're thinking, Ripley...who's laying these eggs? Nobody. They're being grown on a coffee plantation in South America. Didn't you ever read Chariots of the Gods?

So there are these two dimwits who will be the driving force of our movie. One of them is a military bigwig named Stella Holmes. If she were somehow related to JOHN Holmes, it would explain why she's so oogy looking, but it does not explain how she made it so far up in the ranks of the military without being able to handle herself in moments of mild peril. She becomes embroiled in this egg scheme and is forced into the unwelcome company of one Ian Hubbard, a former astronaut who's now a full time alcoholic slob. Hubbard has been tippin' the bottle ever since he was on a bad mission to Mars, where he and his astronaut buddy went into a cave and encountered...something, the details are fuzzy. Hubbard made it back. The buddy didn't.

Well, that's what THEY think, anyway. The buddy is Hamilton, who now lives on a coffee plantation, just like Jim Seals from Seals & Crofts! Except, unlike Jim Seals, Hamilton had his mind erased by an alien cyclops (I suspect Jim Seals had his mind erased by other means). The alien cyclops lived in that cave, and saw those two jokers in their space suits and thought "YES! Here is my ticket out of this dump!" It somehow hitched a ride back to Earth with Hamilton, who is now its hypnotically-enslaved stooge. The alien cyclops looks strangely like the queen mother in "Aliens", which gives "Contamination" the dubious honor of having inadvertently ripped off both the original 1979 "ALIEN" AND its sequel--six years before that sequel was made!

Hmmm...do you think it's possible the makers of this film have seen "ALIEN"?

Now, I know the plot I just related to you may sound out of control wacky and all that, but what I've really done is skip over a lot of boring stuff, mostly because I do not remember it and you probably will not, either. I aint' tryin to tell you how to live or anything, but I'm just sayin'. There's a lot of sneaking around and spying, because "Contamination" wants to be a James Bond movie, too. One crucial scene takes place when Stella, doing some rather clumsy spying on the coffee plantation, decides she wants to take a shower and when she emerges from the shower, there's an egg in the bathroom with her! Some unscrupulous person that wants Stella d-e-a-d must have put it in there while she was blissfully shampooing with Clairol Herbal Essence. It's making that weird humming sound so she knows it's about to explode, so what does she do? Does she rip down the vinyl shower curtain and try and cover the damn thing so it doesn't splatter her? Does she shatter the window and climb out, naked and bleeding but otherwise alive? No. She decides to just bang on the door and scream one of the movie's best lines: "Help! There's an egg!"

Of course she survives her near-death-by-egg experience, because I'll let you in on a dirty little secret: "Contamination" really does not want to show you people exploding. In the beginning of the movie, we see a bunch of men in hazmat suits "explode", and of course a hazmat suit is big and clunky, perfect for hiding a bunch of blood tubes and bladders full of fake red stuff. The other exploding characters in the film who are not covered by clunky suits are rather clumsily realized. This was one of the infamous "Video Nasties" banned in the UK when it appeared on VHS, but honestly you might wonder why anybody bothered, since the gore in it is very brief and mostly unrealistic. Still, it's not often that you see components like coffee, alien eggs, cyclops monsters, and espionage so closely linked in a film. "Contamination" has its charms, but there was something seriously wrong behind the scenes here, with all that stupid spy stuff that seems so out of place. A minor trash classic was narrowly avoided here. 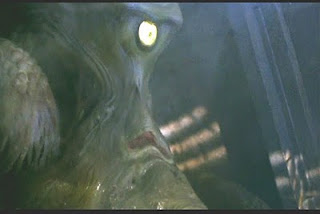 The latex thing with a headlight in it's head cyclops
Posted by GroovyDoom at 4:38 PM No comments: