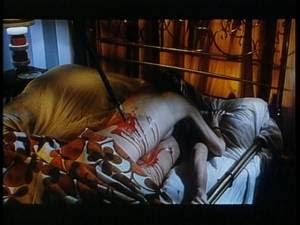 I've been bingeing on Mario Bava films lately, possibly spurred on by my rediscovery of "Twitch of the Death Nerve". I've always loved Bava's films and his camerawork, but I've never watched so many of them close together. I'm already familiar with Bava's "Lisa and the Devil", "Blood and Black Lace", and "Kill Baby Kill". I'd seen "Death Nerve" (under the title "Bay of Blood") once before, but I recently dug it out of my old VHS collection and gave it a rewatch, and this time I was really taken by it.

"Twitch of the Death Nerve" is a brilliant forerunner to the mad slasher "body count" movies. While Bava was clearly riffing on the Giallo style that was so popular at the time, what he was actually doing in "Twitch of the Death Nerve" was closer to what developed in 80s films, starting with "Friday the 13th", which was heavily influenced by it. Even more so the sequel, "Friday the 13th Part 2", which took several murder sequences directly from "Death Nerve". But in Bava's film, the bizarre murders are simply part of the morbid fabric of his atmosphere, which was lush with color, texture, and retro chic. The setting of a wooded bay appears green and almost tropical through Bava's lens, even though in reality it was filmed in an area with very few trees. The film contains more unsettling images within its reels than most: a man gets his face bisected by a machete. The bloated face of a corpse is lovingly caressed by the arms of an octopus that seems to be feeding on it. A writhing beetle is shown impaled alive on a pin. Bava also avoids the typical mad slasher format by filling his flick with multiple killers, all motivated by the potential to acquire a large inheritance. 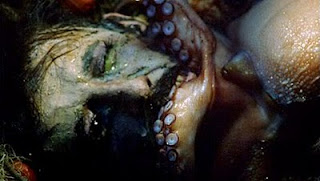 "Schock", aka "Beyond the Door Part II", is Bava's final film, and is a mixed bag. Although it contains enough of Bava's touch to be interesting, it ultimately fails as a film due to a number of wandering passages and a lack of suspense. Daria Nicolodi plays a woman terrorized by the ghost of her dead husband, which possesses their seven year old son. Bava had riffed on "The Exorcist" before, with the dreadful but amusing possession scenes he filmed with Elke Sommer to create "The House of Exorcism" (itself a re-edited version of an older, eons-better film "Lisa and the Devil"). But in "Schock", the possession element takes a back seat to the film's true haunted house soul. There are a few startling, mind-bending shots in the film, such as when the little boy reaches out to caress his sleeping mother's throat in an erotic manner, his hand appearing as the hand of a corpse. Another brilliantly imaginative scene follows the progress of a ghostly image that prowls the walls of the house's basement, circling the perimeter. It is very clearly a cutout image and at first we think the director intends for us to believe it is a ghost, but then the camera pans back to reveal the little boy, holding a family photograph with his new father cut out of it; the prowling "ghost" is the light of a bare bulb shining through the cut out photograph. The most terrifying image in "Schock" is one that was unforgivably revealed in the film's trailer, a breathtaking gut punch as the little boy rushes toward his mother from the other end of a hallway, morphing into the adult-size corpse of his father just as he reaches her.

An older film of Bava's, "Hatchet for the Honeymoon", made the rounds on late-night television with "Lisa and the Devil". I saw it as a kid and was totally uninvolved with it, although it plays much better now that I can appreciate Bava's art. You don't usually watch them for the literal stories, it's all about the visual narrative. "Hatchet" reminds me of staying up too late to watch movies on our local affiliate; it was a difficult movie to stay awake through back then. The very bizarre plot inverts the typical giallo structure by revealing the serial killer as the film's protagonist right away, a disturbed Bates Motel type who harbors mother issues and works them out by murdering brides with a meat cleaver. Although the setup is unremarkable, Bava fills in the blank spots by setting the story in a classically gothic environment; his killer inhabits an old-money style mansion with miles of intricate woodwork and ornate protrusions. The murders are disappointingly bloodless, somewhat confusingly so since they're carried out with a meat cleaver. But just try not to be impressed when Bava's villain/hero tries to throw off the cops by explaining that the screaming they heard coming from his house was actually coming from his TV set, which happens to be playing a clip from Bava's own "Black Sabbath".

Props have got to be given for the music Bava includes in these films, too. "Death Nerve" features a score by Stelvio Cipriani that mimics the exotica style of Les Baxter and Martin Denny. "Schock" is scored by Goblin, working under the name Libra, and although they seem to have saved their best stuff for Argento, they reveal some of the same magic. "Hatchet" doesn't have such a memorable score, although it's punctuated by eerie touches like a music box theme that plays during a crucial death sequence.
Posted by GroovyDoom at 1:46 AM No comments: