The Strange Love Of "The Bat People" 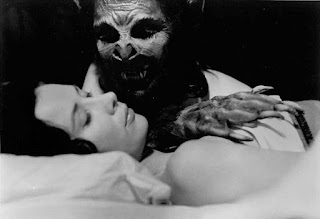 Relationships aren't easy at all. Sure, love is usually great at first, because we're on our best behavior, but eventually the masks we wear start to slip, our significant others finally see the real us, and the tests truly begin. We grow, we change, priorities can be rearranged, and suddenly your love's in jeopardy, baby.

Flapping around American drive-ins circa 1974 was a strange love story called "The Bat People", a horror flick that was distributed by American International Pictures and was frequently paired with other AIP releases like "Frogs", "The Deathmaster", and "Dr. Phibes Rises Again". It was also released with the title "It Lives By Night" and was featured that way on "Mystery Science Theater 3000", a snarky TV show for people who think it's cute when an audience talks during a movie. 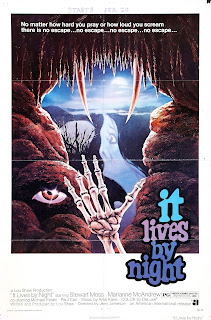 It's true that "The Bat People" is not a perfect film, but it's certainly not one of the worst ever made. The budget is painfully low, and although the actors all have good moments, the quality of the performances fluctuates, leading me to believe the director only had a few takes to work with in each scene. The approach to the monster is minimal in a 1950s sort of way, with only a few brief glimpses of some very cool Stan Winston makeup FX. Interestingly enough, it works especially well when the makeup is shown in closeup, as the two main characters share an intimate moment.

The film does have that essential nightmare dread that was so common in the 1970s, but it comes not from the horror elements. This movie is a romance at heart, with a couple who suddenly find their love threatened by something seemingly insurmountable. Many werewolf type films have this as a backdrop, but the fascinating thing about "The Bat People" is how this seems to be where the script's heart is, and it finds a way to give its formerly doomed lovers the strangest happy ending. It also finds a way to join werewolf and vampire iconography into one creature, similar to the 1950s film "Blood of Dracula". Its main characters are a recently married couple named John and Cathy, who are on a tour of a cave when John is bitten by a bat. Blackouts, seizures and hallucinations follow, and John discovers he is transforming into a bloodthirsty man-bat creature that preys on human beings. 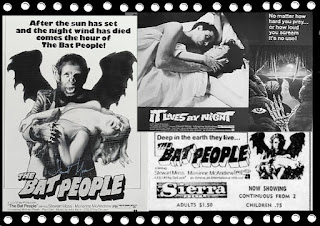 Adding to the sense of disorientation and isolation for the couple is the fact that this all occurs while they are away from familiar surroundings, in a strange place where they've come to combine John's research on bats with a late honeymoon. Although we glimpse others in the area, many of the scenes are filmed in a dark, small town that often seems curiously vacant. John's nightmares and hallucinations are filmed in an arty fashion, with bats and people shot on empty black backgrounds. The expanse of the desert and the hollow caves add a lot of bleak atmosphere to the film.

Once John's crimes have caught up to him, he disappears, leaving Cathy alone and unsure what to do, in a motel room in a strange town that she doesn't even consider leaving without her husband. To ramp up the emotional drama, the sleazy local police sergeant who is investigating John's murders attempts to lure Cathy's allegiances away from John, coming on to her and then reacting violently when she rejects his advances. John himself is, in a strange sense, "running out" on Cathy, as most of his victims happen to be sexy young women.

These other potential "relationships", however, are not for John and Cathy, and even the weird supernatural problem they're facing can't break them up (not to mention that John has now become a murderer). At first John abandons Cathy for her best interest, and he tells her he is happy in this new life he has discovered. But both of them are too devastated to lose one another. John shows up in the hotel room and they make love. When she awakens, John is gone again, but there is something different; either because of something John did to her, or as a realization she makes on her own, Cathy begins to hear the eerie rustling sounds that John heard before he was transformed. She realizes she can change also, and in the strange happy ending, Cathy walks into the cave where she knows John is waiting. The meddling cop is killed by a swarm of bats, freeing John and Cathy to begin their new existence together. 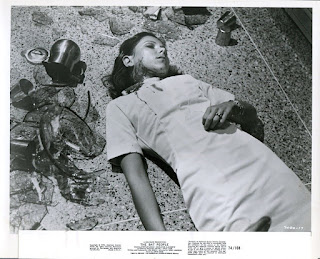 It shouldn't go unsaid that, given this film's notoriety as a "bad movie", its poor reputation has a lot to do with the way it was marketed when it was retitled from its early conceptual titles "Winged Death" and "Angel of Fear". The poster art for the wide release of "The Bat People" depicts an entire colony of creatures living underneath a spooky graveyard. OK?? That's totally not this movie, and anybody who really expected it must have felt like every kid who ordered Sea Monkeys and discovered they weren't really humanoid sea people who could be trained to do tricks. Even though the title could be seen as evocative of the film's subtle conclusion, when indeed we learn there will now be not one but two bat people, the title promises more than the humble film can deliver. Nobody really expects the movie to care about the doctor and his wife more than it cares about the horror elements. 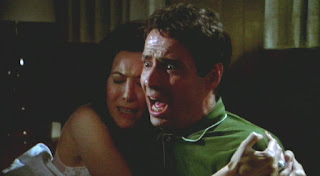 Even with some really great Stan Winston creature designs, the film cannot effectively sustain any real terror, and the horror scenes are better at creeping along in the shadows instead of lunging. There are several murders, but they're almost played for laughs, like one victim we see making out in a truck with a boy and complaining that someone sold her oregano instead of weed. The violence is very PG, but there is one disturbing scene where the sergeant's speeding car is attacked by bats that splatter all over the windshield in gory detail, like rotten fruit dipped in red paint. 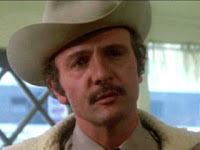 The bizarre love triangle between Stewart Moss, Marianne McAndrew and Michael Pataki actually comes off better. Pataki is especially good, finding an intriguing mix of brutish hero, corrupt cop and predatory perv. Stewart Moss's character seems to be a hopeless square who finally finds the nerve to give in to his animal instincts. McAndrew's character is required to constantly rationalize her husband's antisocial behavior, the ultimate loyal wife who not only defends her man's decision to steal an ambulance and endanger the lives of everyone he nearly flattens with it, but also sacrifices her own humanity and transforms as he did, even if her change is not shown on screen.

What MST3K would never tell you is that "The Bat People" has a strange, dreamlike quality just perfect for a late night drive-in movie. There is a cavernous, artful emptiness to it, an atmosphere of existential dread amid the silliness, and the strangest thing of all could be how the script always keeps its focus on the feelings of its two lovers. For something so derivative, it manages to do the unexpected. 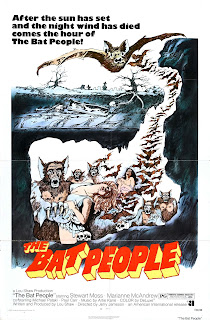 *previously published in "Secret Scroll Digest" and the October 2016 issue of Drive-In Asylum.
Posted by GroovyDoom at 1:41 AM 1 comment: