This news just in from DVDdrive-in.com: 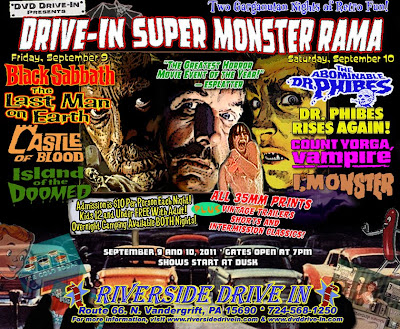 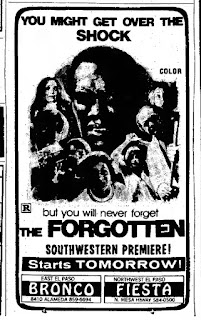 In terms of atmosphere, artfulness, and just flat out insanity, you can't do any better than this 70s freak-out best known as "Don't Look In the Basement". Authentic 70s doom through and through, this cheap little movie played drive-in theaters for years, first released in 1973 under its original title "The Forgotten". Another theatrical run came shortly after, when the film was picked up by Hallmark Releasing, the same distributor as the highly successful "Last House On The Left".  Despite sharing no connecting producers or director, Hallmark retitled the film "Don't Look In The Basement" and claimed it was "from the makers of Last House On The Left", and it played drive-ins for years after, often being retitled lurid things like "The Snake Pit", "Death Ward 13", and my personal favorite "Beyond Help". Its original title is usually blotted out by a cartoonish post-production title card, unfortunately breaking up the gorgeous sequence where star Rosie Holotik arrives at the spooky isolated location where the film takes place (which of course, in reality, is not quite so isolated as it appears in the film). Directed by independent Texan filmmaker S.F. Brownrigg and featuring a cast made up mostly of local Texas stage actors who were unknown to moviegoers (with a few notable exceptions), "Don't Look In the Basement" is one of only a handful of films Brownrigg made, and easily the most well-known. 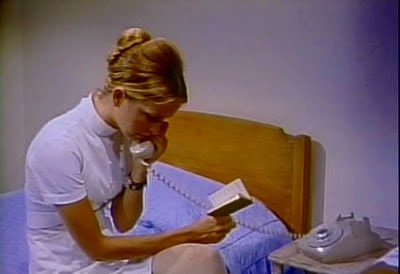 Brownrigg's specialty was creating a unique, foreboding environment in his movies; he endows this one with a claustrophobic tone, wringing as much atmosphere and drama as possible out of a limited series of rooms and hallways. "Don't Look In the Basement" imagines a large, secluded farmhouse as an experimental sanitorium for the insane, where the patients share a communal living arrangement with the small staff of doctors and nurses. Dr. Stephens runs the place under the theory that allowing each of the patients to enact his or her own unique fixation will enable them to become sane again. At the outset, it appears as if Dr. Stephens has been murdered, along with one of the nurses. A young nurse named Charlotte comes to the house and identifies herself as a new hire summoned by Dr. Stephens. She finds a woman named Dr. Masters in charge, who reluctantly allows her to stay due to the fact that she appears to be the only other person on the staff at this point. The living arrangement comes as culture shock to Charlotte, who learns there are no locks on any of the doors and no real privacy. There also seems to be no working phone, and the secluded nature of the location results in her total isolation from the outside world. The characters in the film cover just about any range of neuroses or stereotypical mental problem that the screenwriter could think of: a shell-shocked Vietnam vet, a daffy old woman, a childlike lobotomized hulk, an infantile and dangerous young man, a woman who suddenly goes from being docile to violent outbursts, a former judge who spouts legal gibberish while wielding an axe. The actors in the film are all diverse and interesting, and their performances are memorable and even likable, even though they are also beyond criticism; how can you fault an actor's abilities when the script requires them to act insane? Rosie Holotik is very pretty and vulnerable as Charlotte, although you may not have much sympathy for her after the tenth time someone tries to tell her something's wrong and she refuses to take it seriously.

Although it's fairly clear from the beginning that the inmates have taken over the asylum, the twist isn't the reason the film exists. If you're not paying close attention, the moment could come as a surprise to you, but much like his "Don't Hang Up",  Brownrigg doesn't conceal the truth from the viewer. The film's loose mystery hides in plain sight, such as a moment where Dr. Masters discovers her incriminating case file in the possession of another patient, and makes him hold the crumpled wad of paper while she sets it on fire and lets it burn in his hand. But part of the film's sick fascination is watching Charlotte come to the slow realization that her situation is more dire than she ever imagined, and this realization is about as slow as it gets. Charlotte is the kind of person who would probably ignore a flashing neon sign that said "DANGER!! RUN SCREAMING FROM THIS PLACE NOW!!!" It's the same frustrating tension that worked for "What Ever Happened to Baby Jane?", the type of situation that would have been immediately defused if the victim simply acted like a rational, sentient human being and started paying attention to the warning signs all around.

Brownrigg's low budget is overcome by the way the film draws you in. Although nonsensical at most times, Brownrigg makes the film unsettling through his visual approach as well as his story. Tight closeups that show faces at bizarre angles, carefully arranged shadows, bleak interiors lit by angular patterns of light, all of these are his trademarks. But even that won't make any director's film really grab you. There's a spoofy element to the story, too, with a lot of strange intentional humor. One of the inmates, a nymphomaniac named Allyson (Betty Chandler), corners a hapless telephone repairman in a closet and makes sexual advances on him that are somewhat terrifying. Camilla Carr (who also appears in "Scum of the Earth" and had the central role in Brownrigg's "Keep My Grave Open") plays Harriett, a woman treats her baby doll as if it's a real child. Her pathological delusion is actually compelling, until anybody dares take it from her, or shatter the illusion, when she turns violent and terrifying. Carr doesn't have many lines in the film, but she's one of the unforgettable characters. There's a great moment when Allyson says to her  "You poor thing, I feel so sorry for you. You really think that doll is a real baby!" Before the end of the film, Allyson will have descended into utter madness--after her tryst in the closet with the telephone man, she becomes convinced he is going to take her away from the asylum, but later she finds his bloody corpse and has a shattering breakdown, ultimately dragging it back to her bedroom and engaging in an act of necrophilia.

These connections between the patients are intriguing, and the script is complex without being convoluted. Each of the patients has a back story that becomes familiar throughout the course of the film, except for Jennifer (Harryette Warren), who has no dialogue and just keeps trying to either take drugs or stab people. Hugh Feagin plays the character The Sarge, forever damaged by a bad call that resulted in the deaths of his men. Feagin appeared in three of Brownrigg's films, also playing Susan Bracken's ex lover Nick in "Don't Hang Up!" and the out-of-nowhere killer in "Scum of the Earth" (aka "Poor White Trash Part II").  Rhea MacAdams is probably the only one in the film who truly seems like a non-actor; she is to Brownrigg as Edith Massey was to John Waters, a somewhat grotesque caricature with a bizarre delivery of only the most simple lines of dialogue. She keeps trying to tell Charlotte she's in trouble, and Masters cuts out her tongue for her trouble, somehow convincing the naive Charlotte the old lady did it to herself.

The major plot payoff comes when Charlotte finally understands what we've already been clued in to over and over again: that Dr. Masters is only another patient of Dr. Stephens, a dangerously disturbed woman who would mutilate or kill anybody who threatens to put an end to her own illusion that she's a doctor in charge of her co-patients. Masters is played by Anne MacAdams, later billed under her real name, Annabelle Weenick. Weenick was a very capable character actress who appeared in numerous screen productions, as well as television, and she is very convincing in all of her modes in the film: first an authoritative and in-control director of the facility, then a sad and compellingly disappointed failure, and finally a murderous madwoman. The scene where she explains her motivations at the end is a tremendous "big reveal" moment that has actual dramatic impact instead of just shock, a rarity in these types of low budget screamers. It reminds me of Betsy Palmer's big reveal moment in "Friday the 13th", only Weenick's character has a presence throughout the entire film here.


But there are many other little mysteries that resolve themselves throughout the course of the film, too, visual and spoken clues that add up to things near the end of the movie, like the twist about Dr. Stephens. Although we never see it, we know he's still alive and trapped in the basement, perhaps injured and incapacitated but not dead, because Sam keeps trying to tell Charlotte this and she won't take him seriously. At one point, he brings her Dr. Stephens's watch, and she still doesn't get it. Finally she discovers Dr. Stephens at the end of the film, almost out of her mind with fright as she tries to escape the house, and she winds up beating him to death with one of Sam's toy boats. Yeah, it doesn't really seem like you could kill someone with a toy boat, but whatever. Just go with it, OK? Gene Ross appears in each of Brownrigg's four horror films, and he plays the axe-wielding Judge Cameron here. The Judge figures into another of the film's intriguing mini-revelations; as Charlotte tries to get the truth about Masters out of all the patients, Cameron tells Charlotte that she herself is also a patient, sent there to act out her fantasy of being a nurse. We sense this is most surely false, but Charlotte's reaction to it is one of terror, as her situation has completely undermined her own sense of security and reality.

Although it's fun to do so, movies like this weren't meant to be analyzed. They flashed across the giant drive-in screen while people sat in their cars, sometimes talking to one another. It also must be said that while "Don't Look in the Basement" is grisly, it's not exactly a gore flick. There's some bizarre violence, including the suggestion that one character gets her head cut off in a suitcase (don't ask), but you don't watch this for its blood and guts. Aside from a Grand Guignol finale where the inmates attack one of their own with axes and knives, the violence is all relatively tame. There's a certain pulpy artistry at work here that makes it work. The low budget and downbeat atmosphere make it very much of its time, and the only thing that's really missing is an ominous ballad; although the soundtrack is active and ever-present, there's never an actual song with lyrics. The DVD market is flooded with cheap public domain DVD transfers; as far as I know, there hasn't yet been a definitive home video treatment for this film. Even though the film actually benefits from looking cheap and beaten up, it would be nice, just once, to get a high quality edition of "Don't Look in the Basement". 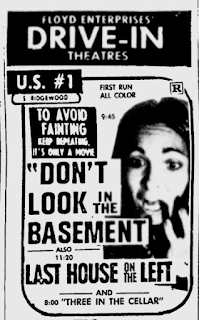 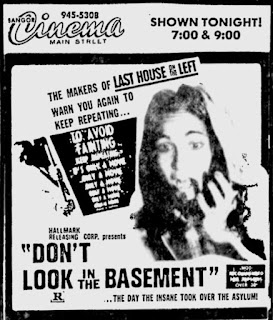 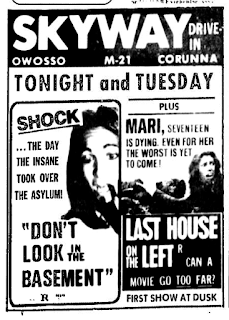 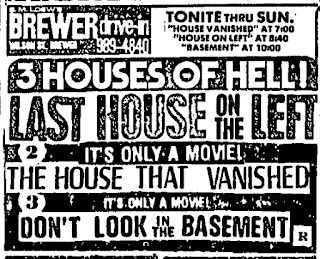