There's something compelling about a man-eating tree. How do they hunt for food? How do they digest their prey? How did they evolve into meat eaters, since they'd have to be pretty good at catching large mammals? Who will prune the damn thing, and what will be left of them? I first saw "Brides of Blood" under the title "The Island of Living Horror" on WOR-TV's weekend "Fright Night" program. It promised man-eating plants, and not only did it deliver big time in that regard, it also provided a killer moth, a monster roach, and the granddaddy of all of them, a man who transforms into a giant rubber tiki monster.

Our adventure begins on a charter boat bound for Blood Island. Now who in the world would want to go to a place called Blood Island? Well, our three adventurers, that's who. Jim Farrell, who is headed there to help the natives learn basic concepts like irrigation and torch-throwing (more on this later). Dr. Paul Henderson, the prerequisite scientist who intends to investigate the effects of atomic radiation on the island; reports of strange mutations have reached the civilized world, but apparently they aren't enough to warrant more than this single man's investigative powers. Mrs. Carla Henderson is also along, apparently only for the ride, because all she does is maintain her elaborate hairstyle and try to bed every man who gets within spitting distance. It seems that Mrs. Henderson is beyond nymphomania and has now created her own special breed of sexual compulsive. Even on the boat ride there, Carla gets all sassy and is happily manhandled by a deck hand. Carla's M.O. seems to be this: #1, act like a royal bitch. #2, fix hair and makeup. #3, men will want to have intercourse with you. 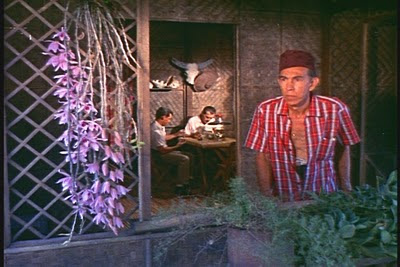 Sittin' in a native hut, all alone and blue...

Upon disembarking, the trio immediately comes upon a funeral procession being conducted by the natives. They realize in horror that the two bodies being carried for burial at sea are completely dismembered; a severed arm falls out, causing Carla to scream in terror. After the ceremony, the Americans are greeted by Arcadio, the tribe's elder, and his granddaughter Alma. Carla immediately senses an attraction between the lovely Alma and the handsome Jim, and she very aggressively attempts to embarass everyone by remarking on it. Arcadio welcomes them to the island, but both he and Alma seem terrified of something, and he openly admits that he wishes he would have warned them to stay away before the boat left. When questioned about the deaths of the two women that were being buried, he claims the cause was an accident, but he makes the vague statement that his people are "ashamed" of returning to the "old ways". 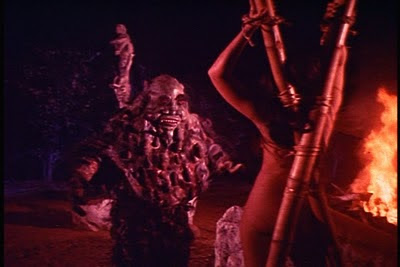 And behold, the Rubber Tiki Monster accepted the sacrifice and was pleased...

"The old ways" apparently involved holding a lottery, tying the unlucky winners to bamboo posts, and leaving them to be violated and dismembered by the resident mutated monster that runs amok on a seemingly nightly basis. Never mind that this practice (which dictates that TWO girls be part of the sacrifice!) would decimate the island's young maiden population in a matter of months, if not weeks. The island is also now populated by common trees and plants that have mutated into grasping predators that reach out for anything that moves...to what purpose I'm not sure, since the plants don't seem to have mouths or digestive systems. Henderson discovers mutated land crabs and roaches, which seem to change back and forth from normal to monstrous at random times. Seemingly oblivious to all of this is the island's resident wealthy recluse, Esteban Powers. Powers lives on a private hacienda with a crew of pygmies as servants and a goon named Goro who sports a nasty scar on his face. Powers sends Goro after the Americans to invite them to dinner, and he asks them to room at his large island paradise. Carla happily convinces her husband to accept, but Farrell claims he wants to live among the people--I'm sure it's just a coincidence that Alma happens to be next door to his hut. 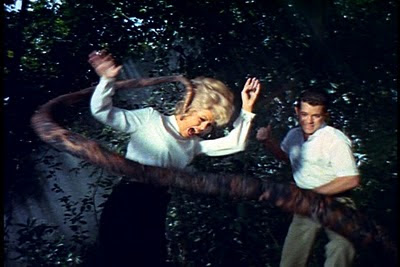 An errant root attacks Carla, not of the variety to which she is accustomed.

The marauding monster itself is a man in a rubber suit, and it doesn't take long to figure out who it is (hint: Esteban Powers suffers from migraine headaches during which he blacks out). It isn't long before Farrell is in love with Alma, and Alma is chosen to be part of the next ritual. Farrell kidnaps her from the altar and escapes to Powers' hacienda, but of course this lands them right in harm's way. Carla can't leave well enough alone and follows Esteban out into the dark jungle, where he transforms into the Sta-Puft Marshmallow man's ugly cousin and rips her apart. Farrell and Alma trek through the jungle with the monster in hot pursuit, but when they get back to the village, everyone wants to kill them for pissing off the local monster-god. Instead, Farrell manages to convince them to throw torches at it, and they burn it alive. Easy enough, right? Why didn't THEY think of that?? The village celebrates by having a fertility dance, after which couples retreat into the jungle to make love five feet from one another. It's a kinky island.

I have such a soft spot for this stupid movie that I can't stop watching it. Although it's dumb to the third power, it's got a strange atmosphere all its own. I first saw it on late night TV under the title "Island of Living Horror". The title card for "Brides of Blood" seems to not really belong on the print, which means "Brides of Blood" was not the original title, either. The special effects are very cheap, especially a killer butterfly (yes, I just said "killer butterfly") that buzzes our heroes and bites one on the hand.

The film seems meant to convince only children, yet there's also a very strong sense of eroticism running through it, too. In one scene, Carla tries to seduce her sleeping husband, who refuses to wake up. Frustrated, she sneaks through the dark mansion until she finds monster-man's bedroom. Boldly going inside, she find him writhing on his bed, seemingly naked and covered only in a strategically placed sheet. He seems to be in the hold of an erotic dream, although we know he's simply on the verge of transformation. Carla is oblivious and tries to get in bed with him, but she is suddenly accosted by Goro, who appears and banishes her from the bedroom like a jealous lover.

Nothing in "Brides of Blood" makes sense, but that doesn't stop me from enjoying it. It's a mondo exotica horror picture that's worlds better than the other "Blood Island" horror pics. It also may be the best man-eating tree movie ever made. 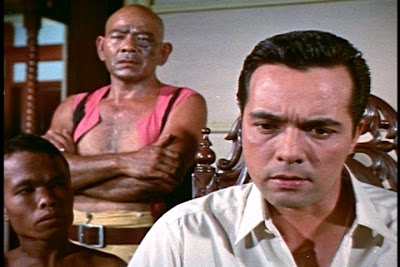 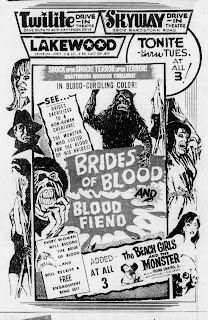 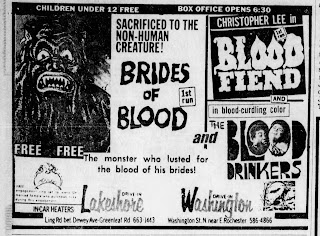 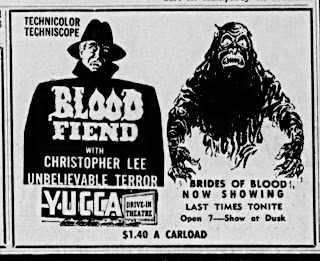 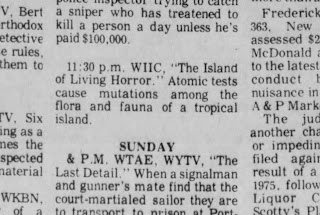 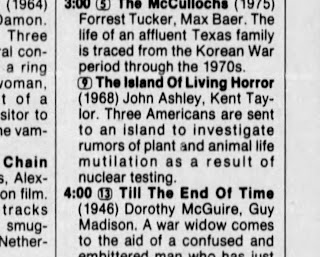 Posted by GroovyDoom at 12:00 PM No comments: