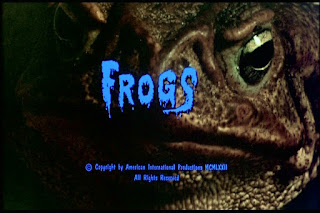 I'll admit I have unconventional taste in films--which is an obvious attempt to make myself sound cooler than the people who might say I like movies that suck. I don't deny that "Frogs" could actually be the most straightforwardly ridiculous movie that I adore, and if you don't believe me just go check out some of the comments left on the "Frogs" IMDB page.  "Frogs" merits a meager 4.1 out of 10 rating, which isn't "Manos Hand of Fate" level, but still pretty low. Nevertheless, I love "Frogs" like a magnet loves your fridge, and I find it to be frightening and disturbing in a number of ways. Prepare to hear me out.

The setup: Sam Elliott (sporting the world's most noticeable trouser snake) is a "freelance wildlife photographer" named Pickett Smith. Through a boating mishap, he ends up at the island estate of Jason Crockett, played by a very cantankerous Ray Milland. A house full of guests allows for plenty of victims when the local wildlife starts to turn on human beings, somehow driven by an intelligence and understanding that they couldn't possibly possess. Gruesome death results: a hired hand is discovered dead, bitten by snakes. A man goes into a greenhouse and is followed by hordes of lizards, which knock over bottles of poison, creating a cloud of noxious gas that asphyxiates him. A woman dies after being hounded by reptiles and bitten by a rattlesnake. A woman gets stuck in the mud and is killed by an alligator snapping turtle. The death list grows!

It's hard to know what to do with a movie like "Frogs" today, since so many films have come after it that showed similar images. There was a time when a character's death really was enough to shock an exploitation audience, but "Frogs" stands apart from most films of its time for a simple reason: this 1972 film takes great pleasure in lingering on dead bodies, showing us a series of characters who have been brought to a disgusting, undignified death. 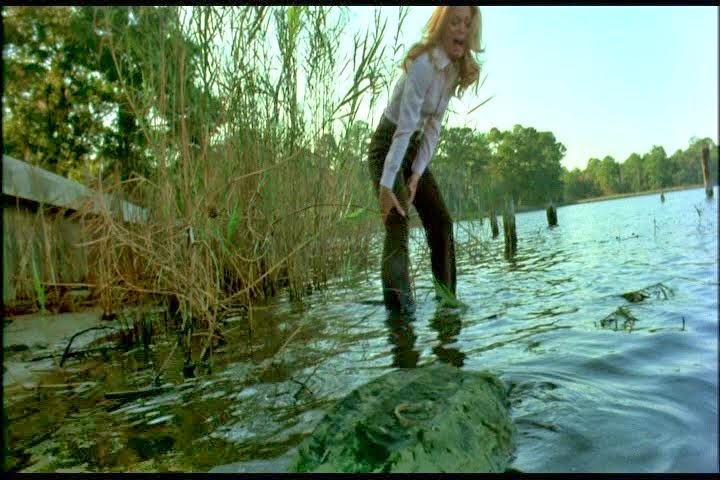 As a child, "Frogs" was the first time a film showed me gruesome death on screen, and it takes an approach to dying that isn't typical of other period films (excluding more underground gore films and "Night of the Living Dead"). I had seen characters in movies die before, but it was usually in a shootout or some other form of action that made it seem almost noble or glamorous. The people who die in "Frogs" do so most horribly. Although obviously the movie is unrealistic, if you accept the fact that it is unrealistic and look at what's really happening on screen, it is deeply unsettling. The victims in the film are indeed killed by harmless animals, but not only that, their deaths are unusually agonizing and drawn out. 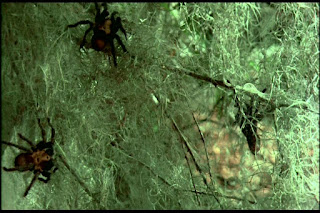 Especially effective is the protracted stalking of Iris, a daffy lady who chases after a butterfly into the marshes, then gets cornered by a bunch of snakes and lizards. The director isn't concerned with what is killing her, or how realistic her motivations are for wandering into the swamp alone with a butterfly net. The horror is not expected to come from the fact that a group of unintelligent animals could somehow work in unison to murder a human being. Rather, what's unsettling is how she gradually disintegrates, her fear causing her to lapse into animalistic appearance and behavior. Her hairstyle falls, ratted out by the vegetation she crawls through, making her look like a madwoman. Her clothing becomes filthy, and in the most excruciating moment, she trips and falls into a marshy pit of filthy water and emerges covered in leeches. Finally, completely demoralized, terrified, and drenched in silt and bloodied by the leeches, she is bitten by a rattler and very quickly dies. We see the moment of her death, and her corpse turns color to a deathly oxygen-deprived bluish hue right before our eyes. To me, this is one of the most horrifying deaths in horror movie history, even if it's also one of the most stupid--check out the stand-in mannequin arm that the rattler really bites! 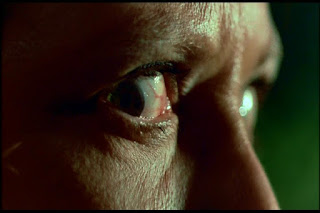 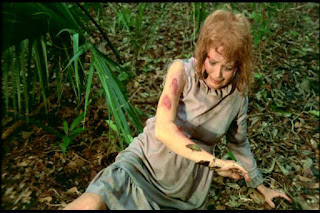 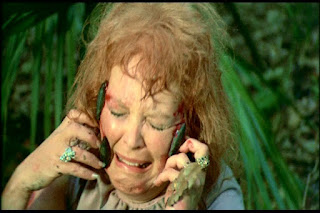 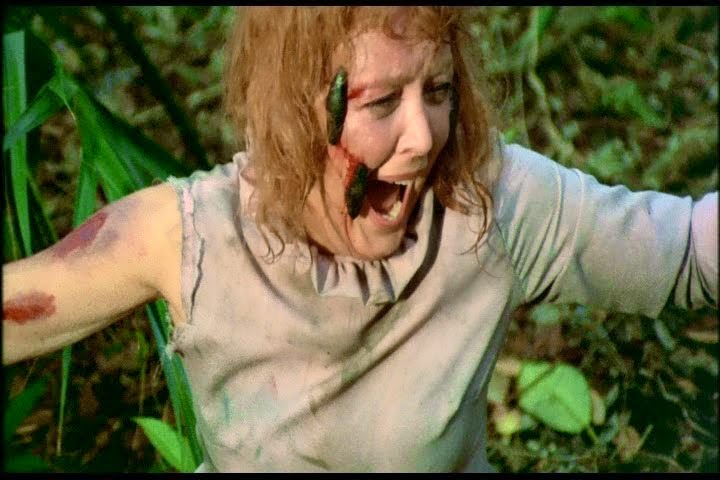 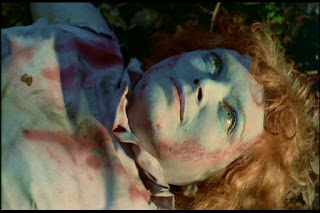 There's a disjointed feel to "Frogs" that the film's low budget and glaring continuity errors help to emphasize. There is a moment when Smith finds one of Crockett's employees dead, lying face-down in a marsh in an unnatural position, with snakes crawling over him. The actor playing the victim is moving ever so slightly, although we're not sure if he's breathing or if the snakes slithering around his neck are making it move. Then Smith rolls him over to face the camera, and we get a look at his face, horribly bloated and off-color. In a series of cuts that most likely represent bad continuity, his eyes go from tightly shut to a hideous, wide-open death stare. The "bad" cuts, however, lend a hallucinatory quality to the scene, and suggest something even more horrifying: although we saw him lying face down in a wet marsh and covered by reptiles, it seems as if he was still barely alive, languishing from the snake venom, and Smith arrived just in time to see the moment of his death. How horrible to end your life paralyzed by snake venom, lying there with them while they bite you and slither over you possessively. That open-eyed death mask that his face becomes is probably the first image of a dead person that I ever saw in a horror movie, and it remains one of the most gruesome. 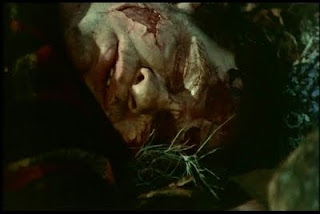 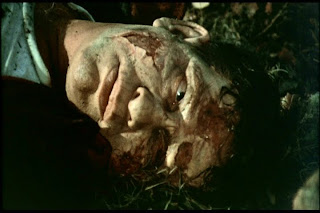 In another particularly outrageous and bizarre moment, a character accidentally shoots himself in the leg and, rendered immobile, is attacked by an army of tarantulas that descend from a nearby tree. An unexplained combination of vines and Spanish Moss begin to bind the man while the spiders bite him and cocoon him with webbing. As his struggling starts to slow and his death approaches, the last image of him is a horrifying one: his face, nearly buried in Spanish Moss, being covered with waves of spider webs. The movie tries to make some kind of overall statement about pollution of the environment, but it's these small images in "Frogs" that stick with you.

The humans in “Frogs” make it easy to root for the animals. Ray Milland's family of the “ugly rich” seem to take pride in their roles as exploiters and destroyers of both people and the environment. Frustrated by his inability to control the blooming frog population on his small private island, Milland has reacted by increasing the use of poison until all the local wildlife has been affected. His relatives are similarly reptilian in their disregard for ethics; Milland’s daughter, Holly Irving, complains that the family fortune has been slightly diminished because of costly environmental regulations forced on their factories. Irving’s husband, David Gillam, encourages his own son to engage in a fist fight; Milland’s grandson, Adam Roarke, is the most arrogant and aggressive character in the film, driving his speedboat while drunk, picking fights with other men in his family, and pathetically longing for the glory days of his youth when he was a football hero. Only Joan Van Ark manages to avoid the selfish pitfalls of her own family, projecting an innocence and sweetness that earns her a place as one of the film’s survivors. Elliott is a free-spirited, environmentally conscious photographer who gently tries to persuade Milland to mend his ways and exist in harmony with nature. Judy Pace’s character helps detail the social implications underneath the film’s surface; a spunky fashion model/designer who is dating one of the rich family’s sons, she brings a sense of social consciousness; she reminds the black servants of wealthy, white Milland that they have no need to be loyal to their employer when their lives are in danger. Her rejection of Milland is more in line with the rebellion of the animal life on the island, although it's suggested that she and the servants are attacked by seagulls while attempting to escape. We never see their bodies, just their bloody, abandoned luggage. I prefer to think they survived, perhaps injured, but alive.

The movie has a very strong atmosphere, thanks to some great cinematography and a bizarre electronic score by none other than Les Baxter. The settings are otherworldly at times, beautiful at others. If you can get past how far-fetched the movie is (and scores of sentient human beings cannot), the biggest liability is the acting, particularly by Ray Milland. He didn't like being in this silly movie, and apparently he was channeling this into his character. The director can't get what's necessary out of him, although it's too bad Milland couldn't see into the future and realize that he would appear in Amando De Ossorio's embarassing sock monster movie "The Sea Serpent". It may have helped him to take "Frogs" just a teensy bit more seriously.


The fact that Spanish Moss and vines don't move on their own doesn't really matter to me, because at heart, "Frogs" is a fantasy--a particularly lurid fantasy about the revulsion that many people have for animals of this kind. Spiders, snakes, insects, frogs, these are all things that make all kinds of people recoil in fear and disgust, and...why? There is no logic to that fear, because these things are generally harmless to human beings. "Frogs" is a fantasy about what the world would be like if our unfounded fears were reality. I don't know if "Frogs" would ever be considered a work of art by anybody, but I know that I like it. 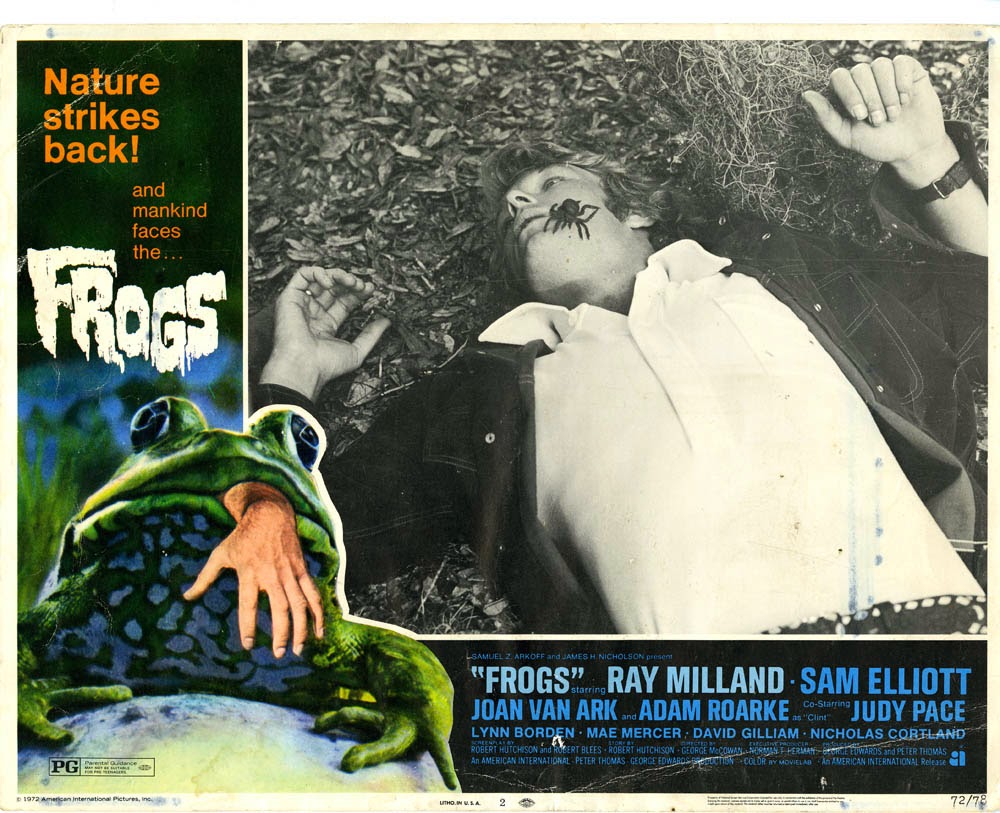 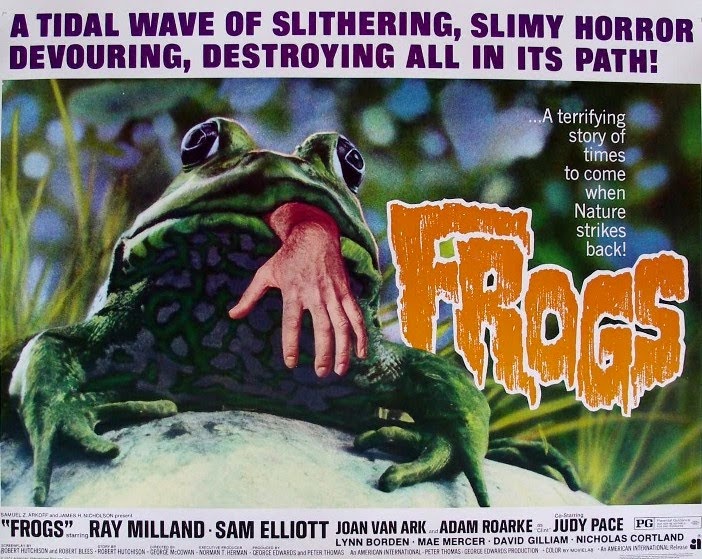 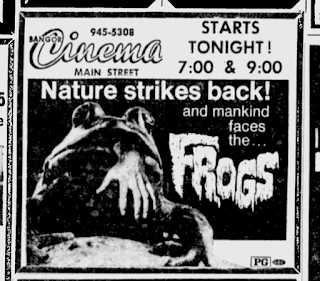 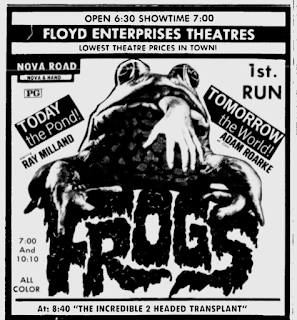 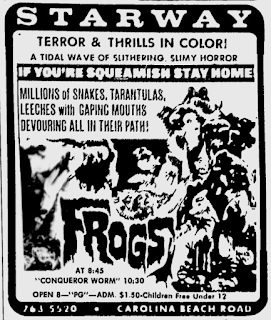 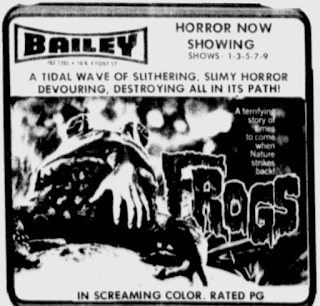