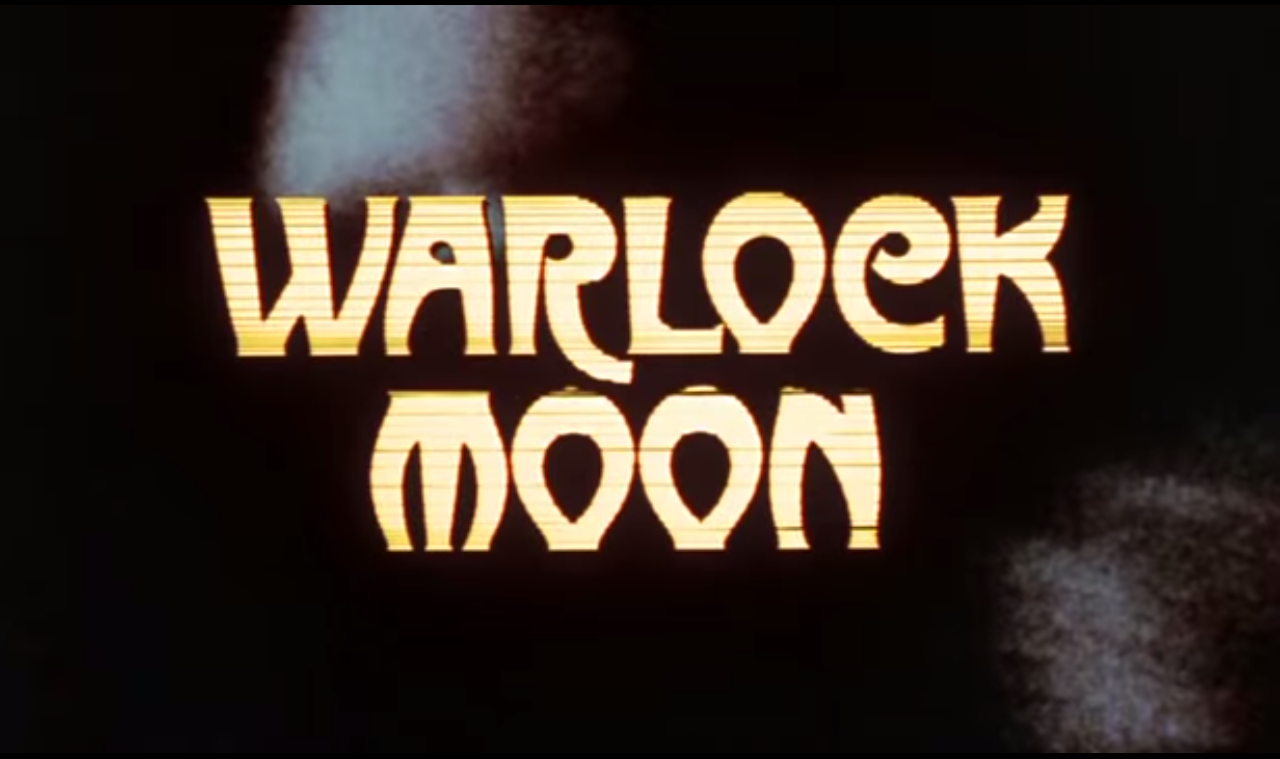 "Warlock Moon" is one of those rare surprises, a fantastic obscure flick from 1973 that I never ran across until a few days ago, when it burst into my life and demanded that I start adoring it immediately. It's one of those cheap films with that special inventiveness the best low budget movies from the 70s possess, with a crew of interesting actors, a sinister premise, and the perfect filming location at a rundown abandoned resort. Of all the recurring themes that were usually present in 70s horror and fantasy films, "Warlock Moon" manages to combine the growing fascination with cannibalism and psycho killers with the oh-so-70s fear of Satanism and cults. The film shares more than a few similarities to another favorite, "The Folks At Red Wolf Inn" (1972), as it also concerns a young female college student who is lured into a trap by a creepy group of cannibals, and both films reveal an America in the aftermath of the Manson murders, where the naive outlook of the contemporary youth left them vulnerable to exploitation and victimization by evil people doing their best to seem harmless. Unlike more realistic exploitation like "Last House On The Left", "Warlock Moon" includes elements of the occult. 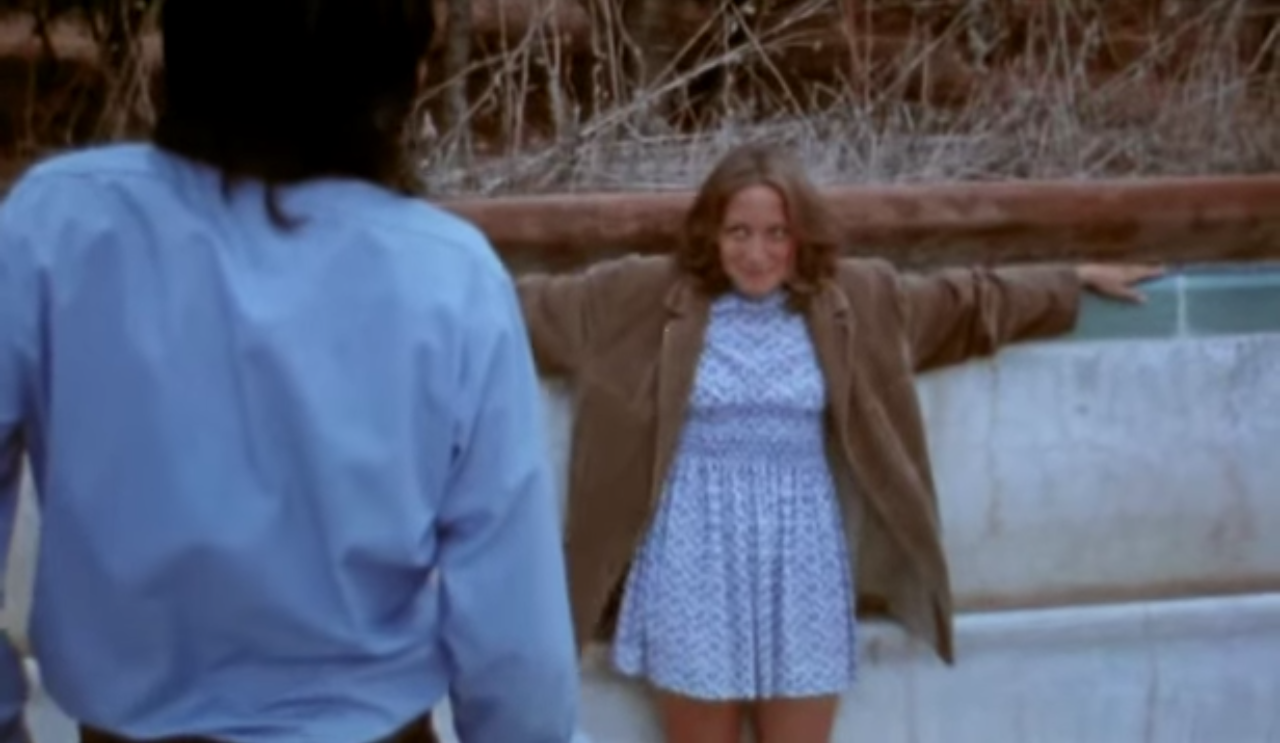 Laurie Walters (best known for TV's "Eight Is Enough") is wonderful as college student Jenny, who is minding her own business one day on campus when she's approached by an eccentric, childlike young man named John (Joe Spano from "Hill Street Blues"). John pesters her for a date by inviting her on a picnic, driving her to a rural area where they find an eerie old rundown resort. They decide to explore it, and are surprised to find an old woman named Mrs. Abercrombi (Edna MacAfee) living there. She invites the young couple to visit, but when Jenny drinks the tea Mrs. Abercrombi gives her, she starts to feel a little woozy. When John and the old lady leave her alone for a few minutes, Jenny goes rummaging through Mrs. Abercrombi's drawers, where she finds some strange, out of place medical equipment designed to give injections. She also glimpses an unidentified, ghostly woman in a wedding gown.

Despite the strange experience, Jenny agrees to meet John there another day, so that he can interview Mrs. Abercrombi for an article about the resort he'd like to pitch to the school newspaper. On this second visit, Jenny arrives before John and discovers that there is no sign of Mrs. Abercrombi or any of her belongings. It appears as if nobody has lived there for a long time. She is startled to meet a kindly old man hunting in the woods who tells her that the resort used to be a health spa that was closed down in the 1930s after the owners hosted a ball for their newly married daughter, who went missing just before the party. Proceeding without her, the guests later discovered that the bride had been murdered by the cook, who served her as the meal they had just eaten. The hunter also casually mentions that this cannibalistic cook was supposedly a woman (hmmmm...), but he considers the story simply folklore. When Jenny hears John's car horn honking for her, she leaves the hunter alone, who then promptly gets axe murdered by one of the crazy looking men we've seen lurking in the area.

When John appears, Jenny discovers that Mrs. Abercrombi and all her belongings have also returned, but John doesn't believe Jenny's story about the place being deserted moments before. After drinking some more of Mrs. Abercrombi's tea, Jenny feels woozy again (hmmmmm.....), then does some more unwise exploring. The voice of the ghostly bride leads her to a room where she finds what appears to be some kind of ritual altar. She is then confronted by the axe-murdering man (who now has a presumably axe-murdering companion with him). After a short chase through the spooky house, Jenny collapses and Mrs. Abercrombi and John find her. There are of course no signs of the men, but Mrs. Abercrombi says Jenny is not well and insists on them staying for dinner and, apparently, overnight. Things naturally go from bad to worse, as Mrs. Abercrombi and her accomplices have something planned for Jenny that will bring her studies at Berkley to an abrupt end.

This is the joy of horror movies, I suppose--we know there's trouble, and there seem to be flashing neon signs warning of trouble, yet the trusting young kids seem to ignore everything and just keep placing themselves in mortal danger. But "Warlock Moon" benefits from offbeat actors who make these characters interesting.  I was particularly excited about one scene between Joe Spano and Laurie Walters. While John and Jenny are exploring the resort some more, they find an empty swimming pool and walk down into it. John goes off on this wild tangent where he enacts a one-man scene from a horror movie where a monster threatens the heroine and is then killed by the hero, and the moment is playful and flirtatious, ending in a kiss between the two of them. After the kiss, John suddenly starts behaving in a menacing way toward Jenny, cornering her in the pool and making slashing movements at her with a large branch he's holding. Jenny is terrified until John breaks character and returns to his old self again. The camera operator is standing right there in the pool with a handheld camera, tracking the two actors in a series of lengthy shots, one of which carries on for at least a few minutes without a cut. It seems spontaneous and real, playing almost like live theater or improv.

Another standout moment is a truly frightening scene where Jenny is chased by one of the axe-wielding villains. Finding the gun of the hunter she met earlier, she shoots him in self-defense inside the freezer, then crawls back out in shock. In a strange and eerie twist, she sees him crawling out after her before we do, cringing as he emerges slowly out of the dark room and latches onto her before dying. Director William Herbert shows great promise with this scene and so many others, it's a shame he never made another movie after this one.


The similarities between this film and "The Folks At Red Wolf Inn" are perhaps unintentional, but notable just the same. Both involve a sweet, naive young woman lured into a threatening situation by people who want to kill her and eat her. Unlike later cannibalism efforts like "Texas Chain Saw Massacre", both movies place their heroines in harms way through elaborate subterfuge instead of just chance. In "Folks", protagonist Regina finds herself at an inn of cannibals because they've pretended she won a contest she never really entered. In "Warlock Moon", the cult tricks Jenny into coming to their reclusive location under the pretense of an idyllic date and a new romance, appealing to both her loneliness and her sense of adventure. Both movies also feature the obligatory "What's In The Big Freezer?" moment where the heroine discovers exactly what that delicious meat is she's been eating, and both position their cannibals as elderly people with a crew of varying ages helping them in this elaborate plot to acquire human victims--there's even a moment where the heroine realizes, belatedly, that the police are in on it, too. 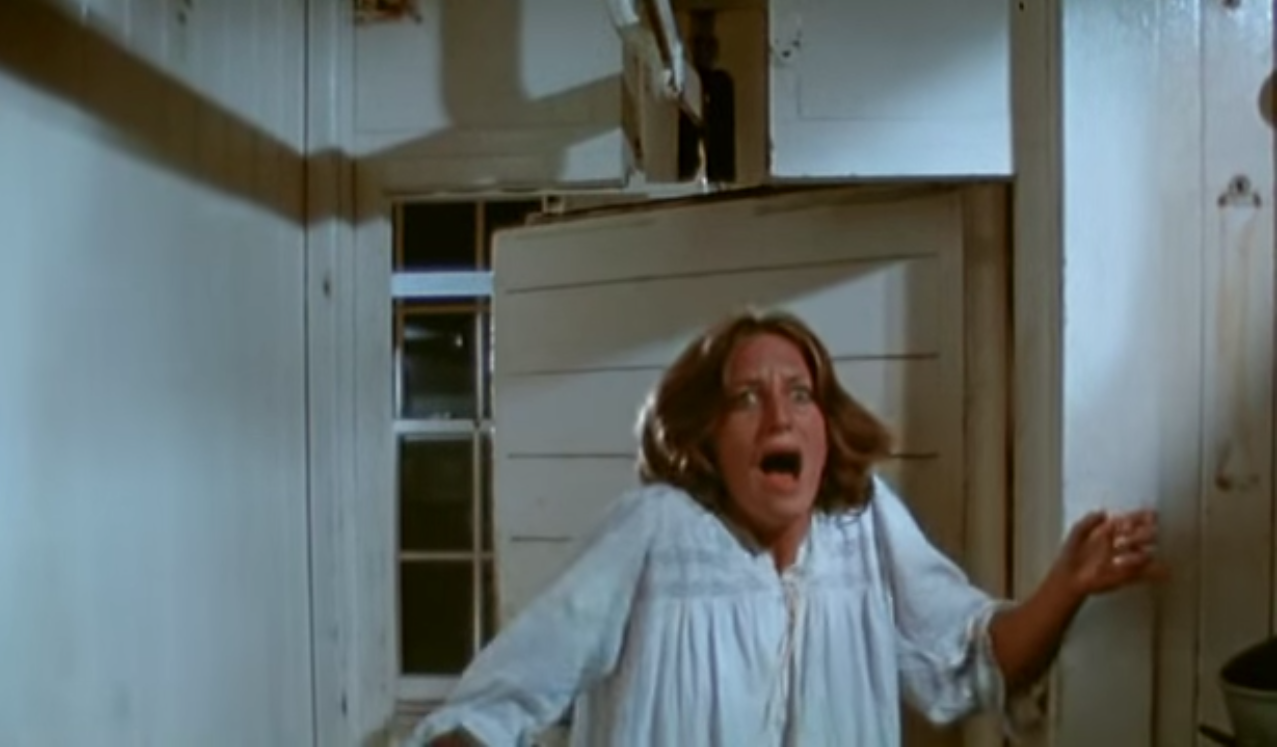 But the scene that plays out with Laurie Walters and Joe Spano in the empty swimming pool is the one that stands out the most, similar in tone and design to the moment in "Folks" where John Neilson and Linda Gillen are sharing a romantic moment on the beach when all of a sudden madness intrudes and Neilson starts brutally beating a live shark against the beach while Gillen looks on, speechless and horrified. When Spano starts to go koo-koo, Laurie Walters reacts with similar confusion, panic and uncertainty--it's unsettling.

Also worth mentioning is Edna MacAfee, who plays Mrs. Abercrombi. She's not quite a non-actress like Edith Massey, or Rhea MacAdams from "Don't Look In The Basement", and she manages to appear both sweet and sinister, often in the same scene. There's a moment when Jenny spots her slipping drugs into her wine, and the way MacAfee reacts to being found out is priceless. 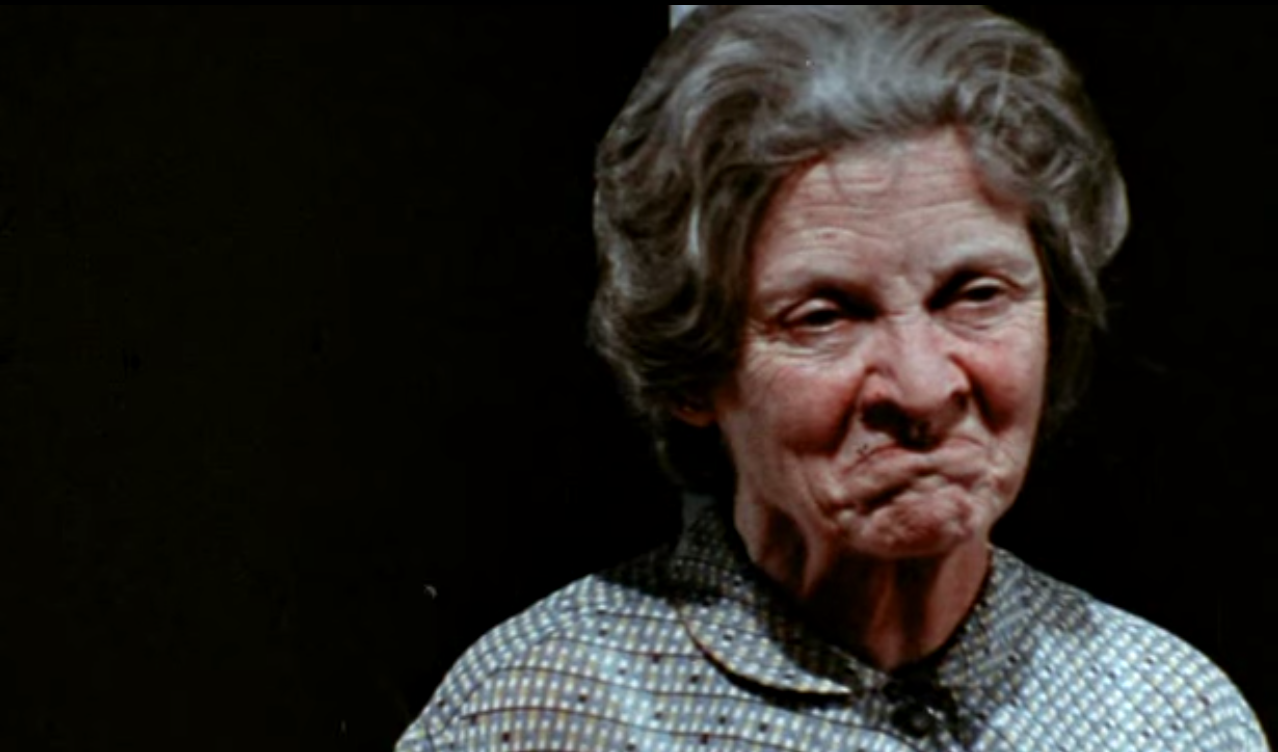 Whether intentional or otherwise, I spotted a few elements in "Warlock Moon" that seem to have inspired more contemporary directors as well. The overall concept, as well as the rhythm of the film's final act, is reminiscent of Ti West's "House Of The Devil", while the two glowering hillbilly axemen in the film seem like they walked straight out of a Rob Zombie movie.

Low budget movies were often made to fill the latter part of the bill at a theater or drive-in and they didn't really have to be any good, just as long as they were something that could be marketed and sold. Features like "Warlock Moon" and "Folks At Red Wolf Inn" are interesting because they clearly have a vision behind them. They aspire to a certain level of artistry that makes them appealing for more than just a few cheap shocks or scares, and both tell tales that are effective without any elaborate special effects. "Warlock Moon" is interesting because of the otherworldly atmosphere it contains, and how effective it is with telling its weird story about cannibal witches with axes. 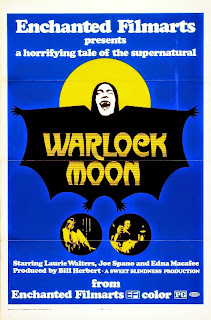 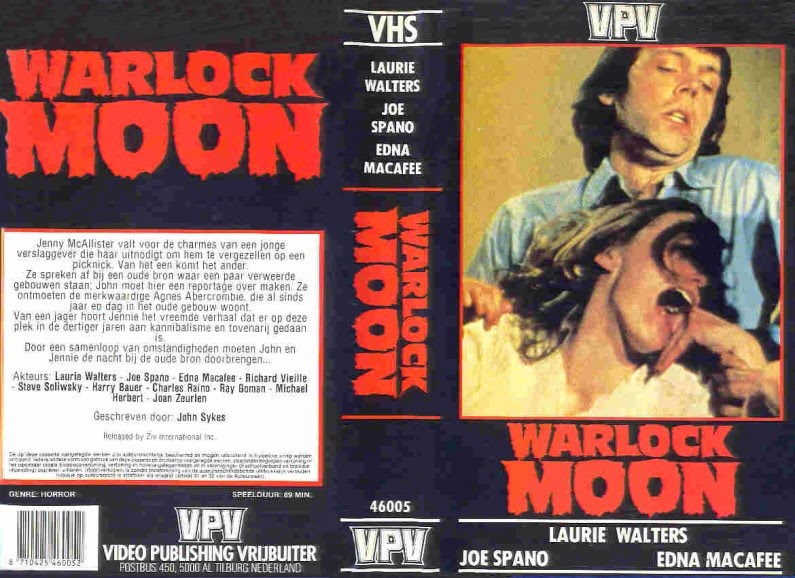