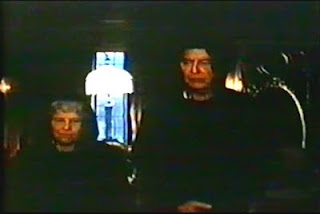 First off, raise your hand if it's a surprise to you that there's actually a sequel to "Rosemary's Baby". Yeah, that's what I thought. "Look What's Happened to Rosemary's Baby" is a made-for-TV movie. That's the first of several bitter pills that must be swallowed during the course of this film. Not to mention that swallowing some BEFORE the film begins will undoubtedly make your viewing experience more pleasurable. Suffering from such maladies as a psychotic script, some stilted acting, and sub-par special effects (whenever such things are attempted) you may correctly assume that this sequel to Roman Polanski's 1968 suspense film does not live up to its heritage. What a pleasant surprise, then, to find that this ultra-obscure sequel to a horror classic is a wacky 70s Doom film full of hallucinogenic images and a constantly downbeat tone.

The many faces of Andrew/Adrian
We're introduced right away to none other than Patty Duke standing in for Mia Farrow. A series of voiceovers, yet another 70s Doom hallmark, removes the need for an actual coherent narrative, and we hear the dialogue from the end of the first film. Then we finally arrive in the present, with Andrew/Adrian (even Rosemary herself can't seem to get it straight) now aged 8 and doing his best to look like an escapee from Village of the Damned. Patty Duke isn't going to make you forget Mia Farrow anytime soon, although her performance is only the first in a parade of bad ones contained in these cursed reels. Ruth Gordon returns as everyone's favorite Satanic smoothie maker, Minnie Castavet, and the best we can say about her is yeah, she's the same actress from the original. No matter, she can't pretend that she's happy about being in "Look What's Happened to Rosemary's Baby", and she looks embarassed. Ditto for Ray Milland as Roman Castavet, who has the unfortunate task of reciting the movie's exposition in a series of voiceovers that move the plot along like a tow truck moving a totalled Pinto. 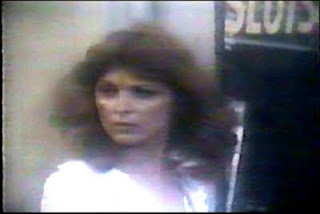 Marjean says, Have you seen my wig around? I feel naked without it.
Guy Woodhouse is now played by George Maharis in a particularly hideous 70s makeover. The coven is intent on making Adrian live up to his destiny as the son of Satan, but Rosemary sneaks Adrian away from them and takes him on the run. They use their ESP radar powers to spy on Rosemary, but she takes refuge in a synagogue and they can't "see" her in there. She throws them off her trail and takes a Greyhound bus into the desert, where Adrian uses his glowing red eyes to rough up some bullying kids who try to steal Adrian's toy car. The fracas flushes none other than Tina Louise out of her trailer, and she ushers Rosemary and Adrian into her little abode to take cover. Tina Louise's character is Marjean, a low-rent hooker who picks up a phone call from the Coven and apparently winds up hypnotized for the rest of her life, forced to care for Adrian while tricking Rosemary into boarding a Satanic driverless bus bound for some presumably awful place. The last we see of poor Rosemary, she's pounding her fists against the back windows of the bus as poor Adrian looks on. If this scene did not traumatize you as a child in the 70s, you were probably already torturing small animals.

From there, we jump forward many years. Marjean's hair is now in a hooker bun, so we know time must have passed because only older women wear their hair like this, right? She now runs a casino, which also happens to feature a groovy house band. Adrian is a far out 70s young miscreant who likes driving cars real fast, playing guitar, and drinking. So far, so good. But wait a minute...if Adrian was born in 1966, and he's in his early 20s now, this would mean it was the late 80s. Apparently in 1976, filmmakers thought the 70s would never end, that somehow we had arrived at the only possible conclusions in terms of fashion, music, and overall grooviness. But, whatever.

Adrian is supposed to be a rock musician, and he has a creepy Jim Morrison vibe going on for sure, but unfortunately we never get to see him perform, which is one of the movie's biggest missteps. Adrian has a best friend who helpfully dresses in white all the time so we'll know he's a force of good. If that isn't enough to penetrate your skull, the screenwriter helpfully named him Peter Simon, and I'm sure he's got a few other middle names in there like Mark and Matthew. Peter tries to convince Adrian to "split" with him for San Francisco, and encourages him to get in touch with his mysterious, dimly-remembered past. Minnie and Roman, who don't look a day older than they did during the opening sequence, arrive on Adrian's birthday to give Adrian one of Minnie's famous mind-altering milkshakes, which causes him to go into a trance. It seems the coven has decided it's time for Adrian to get the business of Antichristing underway, whatever the hell he's supposed to be doing. Roman helpfully explains that it's possible Adrian will flake out on them, in which case they'll simply kill him. Gee, after all that? In what could possibly be the movie's best/worst scene, they paint his face like a mime and perform a brief TV-movie ritual, which ends with Adrian shambling up onstage at a concert and boogeying around with a weird mask on. Yes, it's the evil power of...funk music. Then Peter Simon gets electrocuted when Guy Woodhouse gets tired of him and picks up a downed power line and touches him with it. How, you ask, could Guy pick up a downed power line and kill somebody with it without being electrocuted himself? I guess we're supposed to believe in the devil, after all. 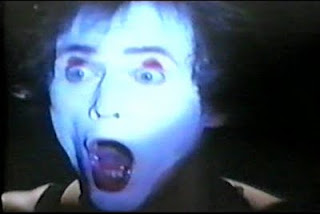 
The film's final third really sends it into the 70s Doom stratosphere: a mental institution, complete with shock therapy scenes and machines that attach to people via wires. It seems that Adrian's birthday party took a turn for the worst. Not only was Peter Simon fried with a live wire, but the entire place burned down and Marjean was killed, too. Poor Tina Louise, even her death occurs offscreen. In a moment of forced plot exposition emotional drama, a helpful nurse named Ellen tells Adrian while he's writhing on a gurney "Adrian, you're all alone now. Your aunt died, your friend died too!" Adrian has some kind of selective amnesia, but the police think he's the one who killed Peter Simon, since Adrian's fingerprints were on the downed power line. You'd think the police would question how ANY living person's fingerprints could be on a live power line, but never mind. The helpful nurse Ellen, played by none other than Donna Mills, helps Adrian escape the institution. When Guy gets wind of the fact that Adrian is out, he gets super paranoid and is convinced Adrian will try and kill him. Ellen, on the other hand, takes Adrian to a hotel and gives him some drugged wine. Uh oh. After putting on a sexy red nightie, she reveals that she is somehow one of the cult, too, and she has sex with the zonked-out-of-his-gourd Adrian. In a TV-movie kind of way, anyhow. Afterwards, Adrian wanders outside into the parking lot of the hotel and is nearly run down by a mysterious black car, which ends up hitting Ellen instead. Adrian tells the police not to bother checking inside the car because nobody would be driving it -- wait a minute, were the makers of 'The Car' watching this movie?? -- but when the police open the driver's side door, inside is GUY WOODHOUSE. Can you believe this Guy? First he sells out his wife to a Satanic cult, allows her to be raped by the devil, sends a rival actor blind, then he thinks he can just run over Rosemary's baby with a car? Good thing the crash kills the pompous ass. Adrian is so freaked out that he uses his supernatural red-eye power to shake off the police and run away.

All that's left is for the big reveal: in a doctor's office, Minnie and Roman talk to each other and bemoan the loss of their ability to control the devil child Adrian, but they are oh so happy when the doctor tells them their "granddaughter" has fully recovered from her injuries and will have a normal pregnancy. YES...it's Ellen! Pregnant with the grandchild of Satan! Finally it all makes sense...Roman planned the whole thing and sent Ellen to get knocked up by Adrian. Once the deed was in progress, he tapped Guy and told him to murder Adrian, but he hit Ellen instead. Fortunately he didn't kill her. The TV-movie end credits show her giving birth to another spooky baby to carry on the saga of doom.

Well, if anybody asks you what happened to Rosemary's baby, you just tell them this: His mother got carried off by a phantom bus, he had a hooker for an adoptive parent, and eventually he got date-raped by Donna Mills. None of this is particularly terrifying, not even the electrocution of a major character, because after it happens you're left thinking "WTF just happened??" But I actually LIKED "Whatever Happened to Rosemary's Baby", because even though it's got problems, it's extremely unique, at the very least. It's less a horror movie than a film about what personal crisis might result from being the offspring of Lucifer. It also doesn't go for the obvious; it would have been easy to make a movie where Adrian went around killing off people by pushing them off balconies and cutting their heads off with plate glass. Instead, it turns into a doomy 70s TV-movie with trippy photography (lost due to the fuzziness of the bootleg prints circulating), bizarre characters, and strange dialogue. It's a little rough around the edges, and for a movie about the Devil it asks for a lot of forgiveness. But Adrian makes a compelling hero if you squint real hard, and these kind of "finding yourself" movies were very common in the 70s. The kooky scenes with the Castavets are fun, like where Roman gives Adrian a joint at his birthday party and admits that Minnie and himself have "tried it". Watch it and be transported back to a time when something could still be called 'Movie of the Week'.

Never mind the baby, look what happened to poor Rosemary!
Posted by GroovyDoom at 3:18 AM 3 comments: