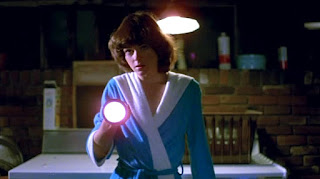 A young vulnerable college student, dressed only in her robe and a pair of slippers, goes into a dark basement where trouble lurks. She finds an opening in the wall that looks like it doesn't belong there, and before you know it, she's climbing a staircase with a serious cobweb problem. She goes all the way up into the attic, where a secret room awaits her, and before you know it, hands grab her and pull her inside, screaming, leaving the viewer with a single burning question:

What the hell was she thinking?

This scene was depicted in the brilliant trailers for the notorious drive-in spectacle "Silent Scream", and it lured carloads of ticket buyers into a movie that turned out to be one of the more timid slasher movies of the decade. Although the timing of the film was clearly supposed to capitalize on the success of "Friday the 13th" and "Halloween", it was actually filmed in 1977 (before the big slasher craze). It has more in common with "Psycho" than anything else, especially the gloomy mansion where the film takes place. In fact, the mansion is one of the film's only settings, aside from a few brief moments set elsewhere.
"Scotty" (Rebecca Balding) is a college student of the 'perky' variety, and the film opens as she discovers that the university she is attending has absolutely no room in its dormitory for her. You might wonder why Scotty wouldn't have already known where she was going to live before her first day of classes, but never mind that, we are operating on slasher-logic, so it makes total sense. She runs down a few places only to find that most of the off-campus housing seems to be taken as well. It sure pays to rent rooms in that college town, lemme tell ya. She finally finds an opportunity at a large foreboding mansion (there goes the "Psycho" similarity buzzer!), which is overseen by an awkward young man (there it goes again!!) with a strange, elusive mother (the buzzer has now become a never-ending klaxon warning of plagiarism).

Things start out well when Mason Engels (Brad Rearden), the gawky teen boy, rents Scotty a room, and she discovers three other renters living there: Doris (Juli Andelman), Jack (Steve Doubet), and Peter (John Widelock). Also living there is Mrs. Engels (Yvonne DeCarlo), who lurks around the attic and is way too conspicuous for her own good. It seems as if the Engels want to make some rent money off these college kids, but they're not quite at ease with the whole thing, either. Could they be, oh I dunno, HIDING something?

Yes, life in this huge mansion on the hill overlooking the beach is turning out to be a big college party, until  Peter gets knifed to death on the beach and buried under an elaborate sand castle. Somebody seems to be working through some issues by using a butcher knife, and since "leaving" seems to be the last thing any of these young folks would do, the next thing to do would be to hang around, wait for someone else to get murdered, then go exploring the basement in your robe and fuzzy slippers. Right? Right.
Most horror movie plots have all been done many times over, or so I've been told. That's still no excuse for "Silent Scream" to steal so much from "Psycho". There's a knife-wielding maniac, screeching violins during the murder scenes, a nerdy boy with mother issues who dresses up in costumes (this time just a military uniform), and a spooky house that sits way up on a hill. "Silent Scream" ought to be ashamed of itself.
But you know what "Silent Scream" has that "Psycho" didn't? Barbara Steele. You know I could not discuss "Silent Scream" without talking about Barbara Steele, even though the introduction of her character provides a major twist in the film by exposing her as the killer. OK, so I spoiled it for you, just deal with it. You'd have figured it out anyway. Much like Betsy Palmer in "Friday the 13th", if you saw Barbara Steele's name in the credits, you were probably wondering when she was going to appear in the damn movie, and when it wasn't in the first two thirds, you just knew she was the butcher knife artist. She's Victoria Engels, whose teenage pregnancy crisis resulted in a series of tragic events: after attacking her boyfriend with a butcher knife (her maiden voyage, so to speak), she attempted to commit suicide by hanging herself. It didn't work, but apparently it messed up her brain even worse, and a lobotomy was the only answer. After three years in a padded cell in an asylum, Mrs. Engels brought her home and ensconced her in the attic, where she's been living ever since, playing with her hair and listening to the same 45 over and over again.

The climax finds Scotty climbing that spooky stairway of doom, being dragged into Victoria's bedroom and attacked. Doris is dead already, stabbed to death in the basement and somehow dragged all the way up that tiny staircase by little ole Victoria (if you knew Doris, you'd understand how unlikely this scenario is, since Doris is a big girl who could have kicked Victoria's crazy ass with one meaty arm tied behind her back). The Engels arrive in time to stop Victoria from killing her, but they tie Scotty up to keep her from running away and blabbing to everyone about their dysfunctional home life. That's when the Engels family drama plays out like a Dr. Phil show: all these years, Mason thought Victoria was his SISTER and that Mrs. Engels was his MOTHER.  But Victoria's really his mother, and the father he thought he had never really existed (it was his grandfather, who was already two years dead by the time Mason was born).

This makes Mason spaz out and start shooting a gun all over the room, until Mrs. Engels is dead, Victoria is "horror movie villain" dead, and Mason shoots himself in the head.  Whew, Scotty's safe now, right? Well, remember when I said Victoria was "horror movie villain" dead? Yeah, that means, she's not dead at all. That is, not until Jack arrives to save the day, and distracts Victoria long enough so Scotty can...PUSH her to death. She falls on the knife and dies. Did you know "Silent Scream" can also mean what happens when you fall asleep and your mouth unconsciously drops open?

OK, so it's not the most exciting slasher climax ever. At age 10, I found "Silent Scream" to be deadly boring. Even though it came out in 1980, slashers were already all about the body count, and the main murderer in "Silent Scream" claims a mere TWO victims. But time has been kind to "Silent Scream", mostly because they just don't make movies like this anymore. There's some decent suspense in this movie, and a lot of atmosphere. Barbara Steele's performance is memorable, one of the reasons being she plays the part completely mute (Victoria has no lines). It's all about the crazy eyes. Victoria seems to inhabit her own dream world, always staring off into space, and there's one moment where she drifts off, then slowly starts to focus in on the helpless Scotty until she's giving her the death stare and coming at her with a very sharp knife.
I should also mention that Avery Schreiber and genre superstar Cameron Mitchell are in this movie as detectives, but their parts are loose ends; they're simply the film's attempt to add some glimmer of realism and suggest that someone really does care about a dead body found knifed to the death on the beach. Otherwise, they're not really much use in the story, as they arrive after the show's all over. 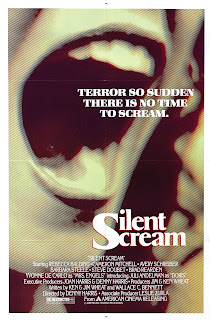 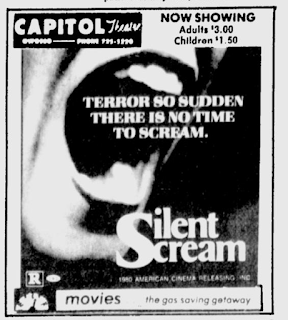 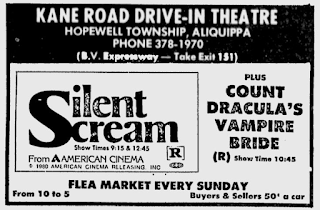 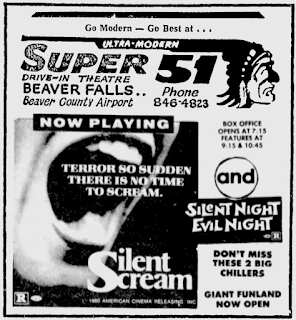 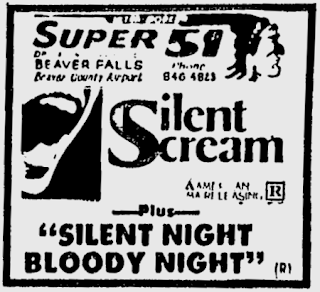 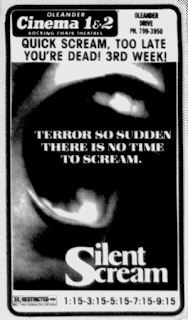 Posted by GroovyDoom at 3:43 AM