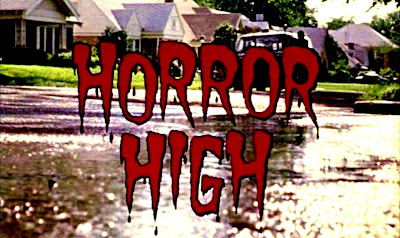 In the late 70s and early 80s, I was too young to go to the movies on my own, and convincing an adult to take you to a horror movie was usually a losing proposition, so TV was our last hope for seeing a lot of the horror movies we'd see advertised in the papers and on TV. Luckily for us, it was easy to find horror movies on TV. The lesser-known horror and exploitation movies usually ended up playing on late night TV or at various times on weekends, all of which was prime viewing time for kids--when the adults were least likely to be around commandeering the TV set or monitoring what we were watching. A lot of times these movies were very lurid and the violence strong even in the edited prints, and some really shocking images warped our young minds. One movie that probably haunted many a young child's nightmares was "Twisted Brain", a movie I later came to understand was originally titled "Horror High". Although the TV version was edited for violence, it still contained glimpses of the film's gruesome gore, including a man's head pushed into a barrel of acid, not to mention the bloody dead body of a pet cat.

Vernon is the typical high school horror movie nerd, the kind of student that even Carrie White would beat up. The mean jocks that terrorize Vernon call him "The Creeper", and even Vernon's teachers seem to want to antagonize him in whatever way that will hurt him the most. A skeezy janitor menaces Vernon at every turn. His English teacher determines that Vernon's poor grades in her class stem from his obsession with chemistry, so she shreds his "biology report" with her paper cutter. His gym teacher strongarms Vernon into helping his dumb football players cheat on their work by copying Vernon's answers on tests. What none of them know is that Vernon's lab experiment involves creating a formula that turns his gentle white guinea pig into a dark-furred, raging guinea-beast. Before you can say Dr. Jekyll, Vernon is drinking the stuff himself, at which point he transforms into a homicidal alter-ego who viciously murders his tormentors.

Although the movie probably was not made with young children in mind, it had a strong appeal to me as a child and I'm sure others felt the same way. Its story about a social outcast in high school has an afterschool special quality to it, because the horrible abuse heaped on Vernon mirrored real behavior many of us saw in our own schools, or even worse, had happen to us. The film's budgetary limitations add to its made-for-TV atmosphere, as does the often amateurish acting. Then just when you think you're in a safe kids movies, all of a sudden -- there's a dead cat, a woman's fingers severed on a paper cutter, a bleeding face with melting white eyes.

"Horror High" makes for a more interesting title, since the horror sequences have a drug movie angle to them (lots of colored lights, zooming cameras, rock music, tilted framing).  It definitely seems possible that it was written while high, considering some of the more outrageous plot points. For instance, why would the school remain functioning after even one murder occurs, let alone TWO murders? Why does Vernon seem to live alone with no adult supervision whatsoever? What kind of high school janitor brings his cat to the school with him? All I can say is, none of it mattered to the younger me, I wasn't paying attention to the plot so much as waiting for the next gruesome shock. 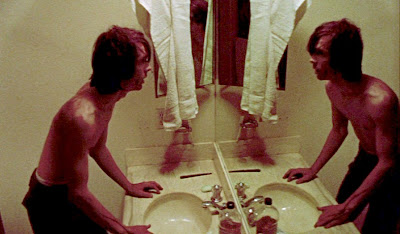 Cult film fans rejoice, because "Horror High" has got a few luminaries. There's one single person in the entire school that likes Vernon, and it's Rosie Holotik, from "Don't Look in the Basement!". She gives a performance similar to the one she gave in "Basement", which is to say very sweet, very vulnerable, and then very screaming. Austin Stoker (from Assault On Precinct 13 and Abby to name just a few) plays the lone detective assigned to this case of a serial killer operating inside a high school. He has the difficult task of playing it straight in a movie that is clearly not grounded in reality. It also must be said that Pat Cardi carries the film rather nicely as Vernon; looking a lot like I imagine Marilyn Manson looked in his high school years, Cardi's performance is appealingly oddball, and he manages to make a somewhat ridiculous character likable enough to be compelling, yet awkward enough that we understand why he's an outcast, too. Some of the otherwise unmentioned performances are best unmentioned, as they are barely passable. Vernon's gym teacher is played by an actor who can't read his lines all that well but does portray a convincing sleazeball character who makes Dennis Franz seem positively squeaky clean, . 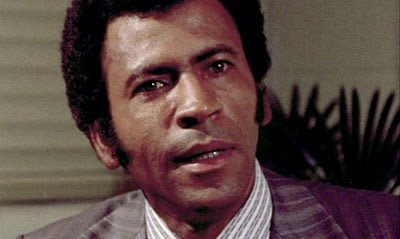 "I can't believe Bill Marshall suggested that I read for this."

The music score is an eerie prog-rock sounding thing; it's more Alice Cooper than Goblin, and it's not nearly as prevalent as it should have been in the finished product. There's even a spooky, folky ballad theme song (with Vernon's name in it!), a hallmark of the 70s. The original unedited 1974 theatrical version of the film was a Crown International Release, and it got a nice DVD release by the Code Red imprint a few years back--it's now out of print, but the film usually shows up on YouTube, and the edited TV version is on a few budget DVD multi pack compilations. 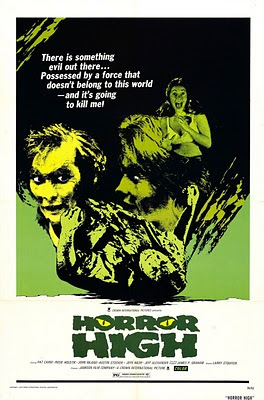 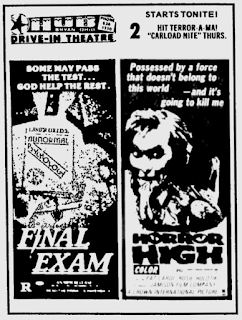 Posted by GroovyDoom at 3:57 AM No comments: