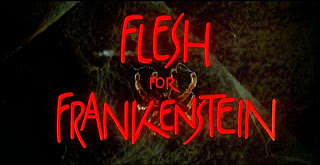 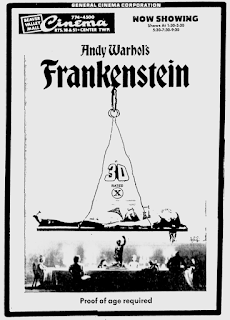 Whenever I think of the most disturbing films I've ever seen, "Flesh For Frankenstein" (1973) has got to be near the top of the list. The concept of Frankenstein and his experiments is something that pop culture tends to gloss over; those cartoonishly square-headed green-skinned monsters we see at Halloween are so far removed from Mary Shelley's original creation that it's easy to forget the "monster" is a corpse, and not even an entire corpse. It's pieced together from numerous dead bodies, as if body parts could be interchangeable and human beings could be little more than elaborate dolls. Filmed in Serbia back to back with "Blood for Dracula" and utilizing many of the same cast members, "Flesh for Frankenstein" was marketed in the United States as "Andy Warhol's Frankenstein", just like its sibling was retitled "Andy Warhol's Dracula". Both films were directed by Paul Morrissey, veteran of the Warhol-produced films "Heat", "Trash", and "Flesh".  Like those films, "Frankenstein" and "Dracula" both feature Warhol personality Joe Dallesandro. While both films are identical in tone and style, only "Frankenstein" ended up being so over the top gory, nihilistic, and absolutely bizarre. It also has the distinction of being the only film of the two that was filmed in 3D. While it is technically a spoof of Frankenstein films, it is played straight and has a serious side that goes right alongside the ridiculous elements. It can be read both ways, often simultaneously.

The one and only Udo Kier stars as Baron Frankenstein, seemingly obsessed not only with the reanimation of dead bodies, but with the creation of a master Serbian race. Frankenstein lives in the family castle with a woman who appears to be his wife and the mother of his two children, who we see in the opening scene prowling Frankenstein's lab and dissecting a doll.  Later we come to realize that the Baroness is not only Frankenstein's wife, but also his sister. Whether or not the two are really the parents of the children is unclear, but incest is the least of the sexual perversions going on in the Frankenstein castle.  The Baroness (Monique van Mooren) suffers from her lack of a sex life with her "husband" and starts to set her sights on local stud peasant Nicholas (Joe Dallesandro), who is constantly found in sexual situations with various young maidens in the village. Aided by the required bizarre assistant Otto (Arno Juerging), the Baron presides over his two monsters in his laboratory. Before bringing them to life, he removes the female zombie from its holding tank and cuts it open, fondling its insides in an orgasmic way, then having sex with it, after which he delivers one of the movie's most unforgettable lines: "To know death, Otto, you have to fuck life in the gall bladder!"

Frankenstein is determined to find the ideal head for his male monster, one that has the perfect Serbian nose (referred to here as a "nasum"). The Baron and Otto find the right head on local peasant Sacha (Srdjan Zelenovic), a mild mannered man who has aspirations to become a monk.  The bawdy Nicholas is his friend and takes him to a whorehouse, but Sacha isn't interested in sex. The Baron and Otto don't know this, and wait for him to emerge with the now-drunken Nicholas. They knock Nicholas unconscious and decapitate Sacha then and there, the Baron holding his head triumphantly. Whatever Frankenstein's methods are, they're pretty amazing because they don't even pack it in ice. Little does he know that Sacha's disinterest in sex makes him an unlikely candidate as the father of a master race, and when he attaches the head to the male monster, everyone is disappointed when he fails to respond to the beautiful female creature.

Meanwhile, Nicholas seeks shelter at the castle after the locals find him next to Sacha's decapitated body and suspect him of murder. Flustered by his studliness, the icy Baroness takes him in and hires him to...tend to her stables, if you know what I mean. When the Baron decides to bring his two creations to the dinner table that night, Nicholas recognizes his former friend and begins to investigate, uncovering Frankenstein's experiments. The two children also are aware of the experiments, lurking in the hidden passageways of the castle and spying on their mother's and father's perverted sex lives. At one point they sneak into the laboratory and gaze silently at the horrors on display there, including a set of disembodied lungs and a heart, attached to wires and tubes and breathing on their own. Frankenstein  himself spies on the Baroness when she's with Nicholas, yet seems to be completely uninterested in her otherwise.

The Baron eventually loses control of the morbid situation he's set in motion. The dangerously disturbed Otto goes haywire with jealousy and sexual frustration, first by attacking the castle maid and killing her when he attempts to fondle her insides the way Frankenstein does to the female zombie. One of the film's weirdest scenes is when he chases her through the laboratory until he has her cornered. He attacks her in a sexual manner, and there is a loud ripping sound on the soundtrack of the film, then she falls over a grating, her internal organs falling out of her body and dangling in 3D at the camera.

Later, Otto attempts to do the same to the female zombie and destroys her in the process, too, infuriating the Baron to the point where he strangles Otto to death. Nicholas, whom the Baron has tied up and held captive in the laboratory, watches as the Baroness forces herself into the equation by demanding that her brother let her take the male monster back to her bedroom for his sexual services. The Baron reluctantly agrees, but the male creature possesses brute strength and crushes her during the sex act, her ribs and back cracking loudly as he kills her. The monster carries her back to the lab, where the Baron has just killed Otto. The Baron goes berserk at seeing his sister dead, and orders the monster to kill Nicholas. Instead it goes after Frankenstein himself, leading to the Grand Guignol bloodbath finale: the monster shears off Frankenstein's hand with an iron gate door. After the Baron sprays blood all over the lab, the creature impales him with a spiked pole, the Baron's liver dangling off the end of it as it's thrust into the camera. The Baron delivers (de-livers?) a hilariously long dying speech, then expires in a kneeling position. Nicholas asks the creature to free him, but instead it commits suicide by ripping its own guts out, preferring to die rather than go on living. With the rest of the cast dead, the film ends as the children enter the lab and regard Nicholas curiously, then make preparations to re-enact the opening dissection, this time using Nicholas instead of the doll.

The movie has a strong atmosphere of doom and horror, even without the fantastic gore, but the gore is a large part of the movie's experience. Never has the true horror of Frankenstein's bodily invasions been so explicitly portrayed in a movie. Although the Hammer "Frankenstein" films came close, none of them paired their gore with such a strong sense of sexuality, and none of them would have dared tackle such pervasive themes of both necrophilia and incest. The actual sex scenes in the film are not pornographic, although the overall tone is way stronger than a typical R rated film. They're also a little unusual, shall we say, and more than a little ridiculous, like when the Baroness ecstatically licks Nicholas's armpit. While there is a lot of female nudity, Dallesandro also appears full frontal in the film, which even in 2013 still seems to push the envelope of what is and isn't acceptable in onscreen sex scenes. Indeed, "Andy Warhol's Frankenstein" was shown in the US with an "X" rating upon its release, and I'd advise against watching the edited R-rated version that circulates (the version on Netflix is listed as unrated, but is actually the R rated cut that removes most of the gore and sex scenes by either cutting them out entirely or destroying the film composition by zooming awkwardly onto less-offensive parts of the frame). The nudity and graphic violence are very much essential to the movie's effect.

Although the movie is clearly not meant to be taken seriously, it's also hard not to get drawn into its strange world, which has a lot to do with the quality of the production. The sets are truly amazing, especially Frankenstein's lab, a nightmarish space containing antiquated tile, stone, and of course the essential mad scientist tubes and gadgets. The cinematography is engrossing and always artful, capturing the visual details of the sets and outlining their depth and character. The presence of Joe Dallesandro seems completely nonsensical, since everything about the movie is European except for him and his displaced New York personality, complete with a strong Brooklyn accent. Udo Kier's overwrought performance as the Baron is both absurd and strangely compelling, such as the scene where he desperately tries to get the male zombie to become sexually aroused by the female, shrieking over and over to the female zombie "Kiss him! What are you waiting for, KISS HIM!" Kier plays Baron Frankenstein much like a caricature of Hitler, which seems logical considering he is a sociopath obsessed with creating a 'master race'.

Although Dallesandro's performance is typically wooden, he does have a presence that's hard to deny. Monique van Mooren hits all the right notes as the snobby Baroness, and she even has one of the film's best lines when Dallesandro tries to warn her she's in danger and she shouts at him "How dare you wake me up in the middle of the day when you know I have insomnia!"  The children are especially creepy, as they are silent throughout the entire film and have no lines of dialogue. We see them learning the decadent ways of their parents, even spying on them from the secret passageways when they're having sex, and after the Shakespearean climax of the film they silently approach Nicholas with scalpels, suggesting that Frankenstein's bizarre experiments will continue. While on one hand "Flesh for Frankenstein" is completely absurd and even laughable (and the filmmakers do want you to laugh), its nightmarish world of bodily degradation and sexual excess starts to take on a life of its own. 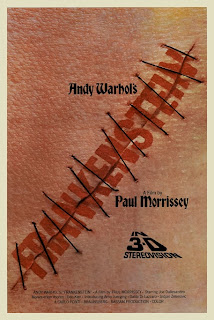 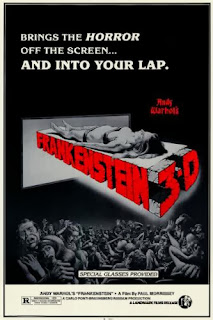 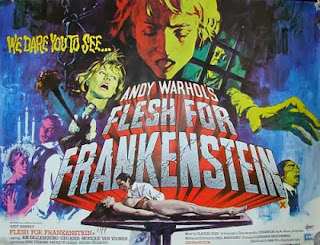 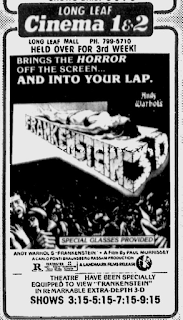 Love your review, Groove Lord! Would you know where I could score an Unrated version in 3D? I scoured the Net but can't find it :(

Indeed I don't, although I think I remember hearing there's a Japanese 3D version on VHS. Seeing as it's Japanese, it's probably uncut...although there might be digital masks over the naked no-no regions of the actors and actresses. Keep watching eBay!