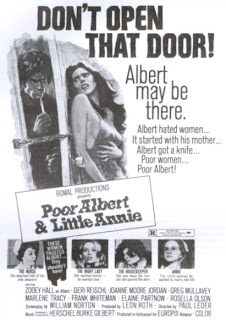 "I Dismember Mama", aka "Poor Albert & Little Annie" (1972) has one of those notorious titles that I have always seen lurking on the outskirts of my awareness, on video shelves, in magazine articles, in catalogs...and all with no idea what kind of movie to which it was attached.  I decided to end this silly game that "I Dismember Mama" and I were playing with each other, and just walk right up and introduce myself. That was when "I Dismember Mama" turned around and whacked me up side of the head. I still haven't recovered.


Directed by Paul Leder, whose career I'm mostly unfamiliar with, "I Dismember Mama" is a low budget curiosity that is full of interesting photography, excellent performances by actors, and a memorably bizarre story. Although its cheapness shows through in almost every scene, it shows just as much art and inspiration as it does technical ineptitude and fragmented editing. If it hadn't featured such convincing performances by the leads, it never would have worked. 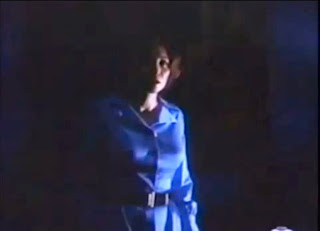 The first thing we see in the film is a man's face surrounded by darkness, next to a running film projector. The face belongs to Albert Robertson (Zooey Hall), who is currently in a mental hospital. A nurse comes in and interacts with him, gently scolding him with something like "Now Albert, you know you're not supposed to be watching these films..." and we assume these are what proper people refer to as "art films".  When she takes the film out of the projector, Albert goes from mildly irritated to violent in a split second, hurling the startled nurse onto a bed, ripping her clothes off and trying to strangle her. Orderlies intervene in the nick of time, but we immediately understand that Albert is screwed up like a soup sandwich, and appears to be in an institution ill-equipped to deal with him. Albert's doctor tells him Albert's there to deal with his feelings that "all women are whores," and he seems to fixate on his mother (Anne Marie Jordan) most of all. Albert has tried to knife her to death, and because of Albert's lack of remorse for his aberrant behavior, the doctor intends to send him to a state institution. See, Albert's mother is rich, and she has him in some private, low-security hospital, and Albert easily escapes by murdering an orderly.

From what we see of Mrs. Robertson, Albert had the right idea after all, as she seems like a self-absorbed snob. We see her talking down to her housekeeper, Alice (Marlene Tracy), and she blames Albert's outburst on his victim, the nurse, and she pooh-poohs the idea of sending Albert to an institution. She changes her tune though when Albert calls her and tells her he can hardly wait to see her. The police spirit her away to another house, but apparently it never occurs to them to put an officer at the main house. You know, the one Albert knows his mother lives in? When Albert shows up there later, he catches Alice packing her suitcase to leave.  In one of the movie's most disturbing scenes, he begins to torment Alice, threatening her with a knife for information about his mother, then ordering Alice to strip for him and perform a sexy dance. It's an intense scene, and one that both actors carry off expertly, especially Marlene Tracy. She's forced at knifepoint to strip and sing for Albert, and we can see in her eyes when Alice begins to realize Albert will certainly murder her. It's one of the most hair-raising things I've seen in a movie. 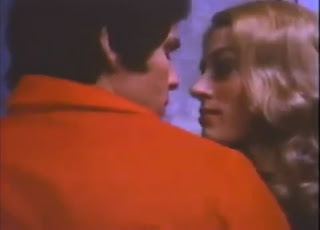 But the rest of the film is just as engrossing and disturbing. Alice's preteen daughter, Annie (Geri Reischel), comes home from school after Albert has killed her mother, and the dangerously disturbed Albert tells her that her mother had to go to the doctor because she was ill. After they hang out together for a while, Albert takes a liking to her and apparently decides not to kill her, instead spiriting her away on an idyllic day where they ride paddleboats and a small train. When Albert takes Annie to a hotel, his strange attraction to her starts to manifest itself. Instead of making a sexual advance toward Annie, Albert goes to a bar and picks up a woman there by flashing a little money around. We already know he's going to kill her, and Annie wakes up when it happens, escaping the hotel suite down the fire escape. Albert chases after her and pursues her in the film's climax, which finds them Annie lost in a strange, deserted back alley of the city. They wind up in a mannequin factory, where Annie tries to hide among the figures. Albert spots her though, and accuses her of being "just like all the others", attacking her with a convenient meat cleaver that just happens to by lying nearby. Annie, however, pushes a mannequin into him and he falls out a fourth story window onto the concrete. 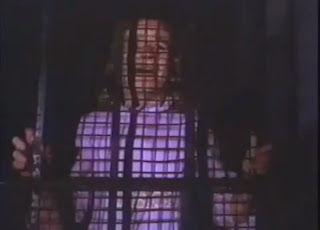 "I Dismember Mama" actually doesn't feature any dismemberment, and eventually the mother is completely forgotten, so the title is nearly meaningless. This is probably one of the biggest problems that the movie has, since enough screen time is given to Albert's heartless mother that we start to care about whether or not he gets her, and we want him to. Although Albert is a compulsive murderer and rapist, we get the feeling that his mother is completely disassociated from reality, and she can't deal with the truth about Albert. There is also all sorts of ineptitude from the police, who aren't even coherent enough to guess that Albert might return home after escaping from the hospital. Even Albert's "doctor" is a shithead, openly defying the police investigation and refusing to tell Mrs. Robertson that Albert has killed her housekeeper. 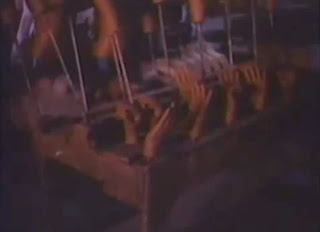 But these unresolved plot threads are really superfluous anyway, since the film's centerpiece is Zooey Hall. His performance as Albert is as terrifying as David Hess from "Last House on the Left", but Hall endows the character with a likable side too, which really makes it upsetting when he lapses into his deranged behavior. The scene where he threatens Alice and makes her strip is really scary because he is so calm and collected during the whole thing, but his explosive violence in the other murders is just as scary. The terror of Albert is that he's obviously dangerously disturbed, yet he doesn't come up against anybody who can put him in check. The doctor he's assigned is unable to reach him, the hospital staff is unprepared to deal with him, and the victims he selects are seemingly unable to fight back against him. His interest in Annie, however, brings out a childlike side of himself, and it's hard not to feel pity for him when we see his momentary happiness. A lot of the tension, of course, depends on Annie being totally naive about the fact that she's in danger, not to mention that she is in the company of a man who apparently has pedophilic designs on her. After killing her mother, Albert takes her on a day of fun, then spends the night with her in a hotel, and in a bizarre sequence we see them conducting a mock wedding. Albert tells Annie that she's the only pure female he's ever known, uncorrupted by whatever issues he perceives about most women. In the hallucinatory chase through the mannequin factory at the end, surrounded by artificial female bodies in various stages of assembly, there's a moment when Albert finally spots her and sees her with cosmetics on, something we're never quite sure is real or not. This horrifies him and he immediately decides to kill Annie, using a meat cleaver that's conveniently lying nearby--in a mannequin factory! Only Annie's cleverness saves her; using a mannequin as a shield, she manages to push Albert out the window, the mannequin protecting her in the way an adult might protect a child from danger. 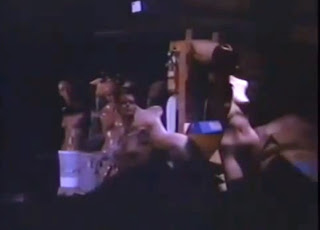 "I Dismember Mama" is extremely dated filmmaking, which either adds to or detracts from it, depending on the viewer. The glimpse into the social mores, design, clothes, decor, and attitudes of the 1970s is crucial to the experience, and there's even a ballad that plays over top of the montage where Albert and Annie have their fun day together. I loved one moment when a character was standing outside a hot dog shop that sold hot dogs for 19 cents. Viewers expecting gore will be disappointed, and with good reason in a film that was marketed until a title that features the word "dismember". There is a gory aftermath of a throat-slashing near the beginning, and a briefly glimpsed surface wound during a knife attack, but that's the extent. The original title is also misleading, though, and more than a little vague. I can't say that "I Dismember Mama" is a pleasant experience, but considering horror movies are meant to get under our skin, this one succeeded in spades with me. It is artfully disturbing and tastefully done, considering that it touches on themes of mental illness, sexual violence, and apparent pedophilia, and I won't forget it anytime soon.  Leder, who also was behind the awful 1976 giant monster spoof/ripoff movie "A*P*E", also made a sequel to "I Dismember Mama" in 1994 called "Killing Obsession", but as yet I haven't seen it, and I can't imagine how this doomy little movie could be improved upon. Forget the lack of gore; this is about as lurid, affecting, and engrossing that an exploitation film can get. 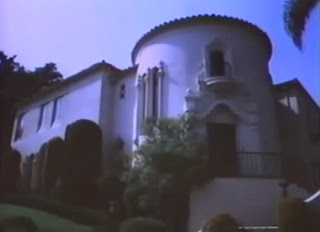 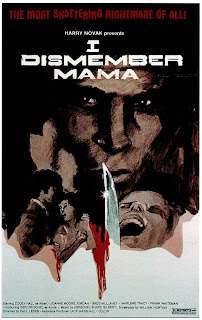 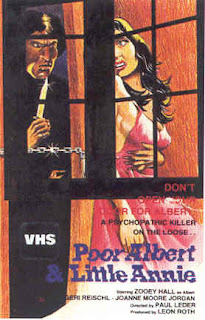 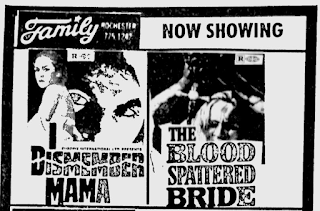 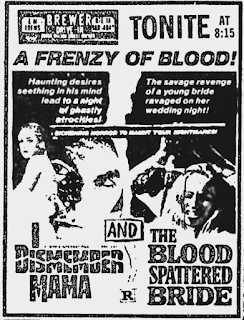 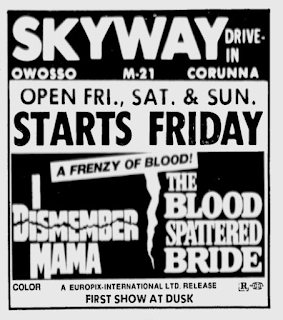 Posted by GroovyDoom at 4:47 PM