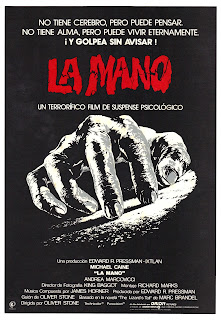 Let's hear it for "The Hand", one of the best movies ever made about a crawling hand.  Well, no, let me rephrase that: what I meant to say was, "The Hand" kinda sucks.  It was 1981, the year of such other great horror movies as "The Howling", "An American Werewolf In London", "Evil Dead".  So, what the hell is "The Hand"'s problem?  Why couldn't it get with the program?

Well, for one thing, it's hard to be a good movie when the movie's about a crawling hand.  It's just not really all that scary.  "Oh, there's a hand crawling on the ground?  Well that's really weird, step on it.  Or run over it with a lawn mower.  Or, just put a laundry basket over it and put a heavy book on top to hold it in place."  What damage can a crawling hand do?  In "The Hand", it not only crawls, but it seems to teleport right onto the necks of its victims. 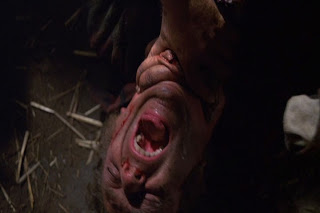 Michael Caine is a cartoonist married to a woman who talks like one of the "NPR girls" from Saturday Night Live.  Their house in the country is getting on her urbane nerves, and she wants to take an apartment in New York City.  What she fails to tell him is that she intends to take her daughter and move there without him.  In what is possibly the movie's only truly effective scene, they're setting out for NYC to look at a potentially fabulous apartment to rent. NPR woman is driving, and she has an unfortunate case of road rage that results in an accident that severs Michael Caine's hand.  Blood everywhere! 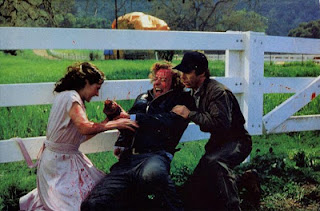 At that point, the movie could probably end, because that's probably what you'll remember most after watching "The Hand".  Caine gets a prosthetic hand to replace the one that's currently rampaging through his life, but his days of cartooning are over.  He leaves town and takes a job teaching, meets a biker chick and begins an affair, makes a sleazy friend, and is stalked by his crawling disembodied hand. I think we're supposed to dread and/or anticipate the moments when the hand might appear and strangle somebody, but honestly it only happens a few times.  And get ready for some massive spoilage...I mean really, I'm going on a spoiling rampage here: it turns out that the hand didn't really do anything, it was really MICHAEL CAINE doing all the strangling.  Bet you didn't see that one coming, did you? You probably won't see the twist-twist ending coming, either, where the hand really does choke a doctor to death while Caine watches (Viveca Lindfors, who had a much more enjoyable cameo role in "Creepshow" the following year as dotty old Aunt Bedelia).

I'm not sure what Oliver Stone was going for with this one. I can't even speculate as to how much cocaine he was doing at the time, because "The Hand" isn't crazy enough to indicate anybody was having any fun at all. I admit, a crawling hand is a creepy idea, and they can be fun for a brief moment, like in "Evil Dead 2".  I remember a crawling hand in that all-time TV classic "The Eye Creatures", and that scared me when I was about 8.  Oh, and Christopher Lee fell prey to a severed hand in "The House That Dripped Blood".  But crawling hands aren't really scary enough to carry their own movies, and even though it is very talky, "The Hand" was definitely promoted as a horror movie. It got coverage in "Fangoria", I remember reading about it and seeing shots of the gruesome hand effects, both Michael Caine's bloody stump and the crawling demon itself. But ultimately, "The Hand" comes off just like its title villain: it's no big deal.
Posted by GroovyDoom at 11:19 AM