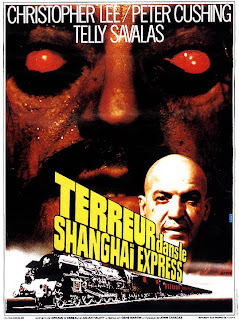 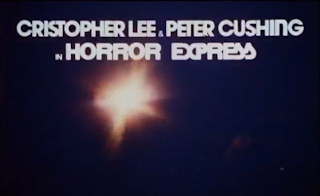 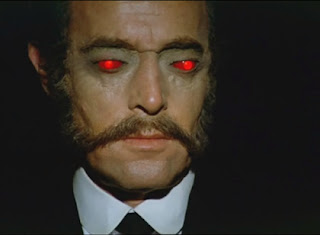 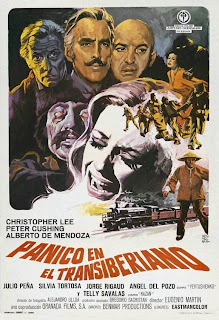 Posted by GroovyDoom at 4:41 PM

A classic. We just watched this recently. On VHS!

VHS! A splendid way to travel the Express.

My name is Rodrigo and I´m Brazilian.
Interesting blog!
I found it after a picture about a trash film (THE INTRUDER WITHIN)... Known in my country as O MONSTRO QUE VEIO DO MAR (in English THE MONSTER WHO CAME FROM THE SEA_the translation sounds better!).
I used to watched it on TV several times, in the 80´s: and wanted to produce one like that (I wished to produce other trashs too...lol!).
I remember once I taped a scene (sound) where the creature screams in my radio and put it...a person from my family thought that was THE DEVIL! More laughs.
Another film shown here is the one in this post, HORROR EXPRESS: I used to watch it on TV and tried to record as well (but the channel was wrong). And it´s a shocking tale.
It´s common teenagers, young people adore this kind of movie: now I prefer COMEDY/CLASSIC/DRAMA_the world, life is so difficult: watching better things helps!
And seeing these things that I used to like in the past makes me feel sad; I remember the difference since that time - a bad effect when we have GREAT MEMORY.
That´s it.