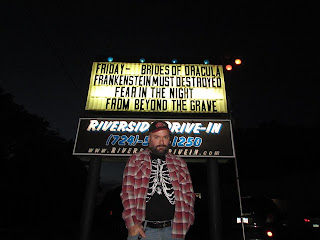 The 7th annual Drive-In Super Monster-Rama is over, and what a wild couple of nights it was. There's something about these events that really is like going back in time, and this year the Riverside really went all out and decorated the place a little extra spooky, including a haunted graveyard just outside the snack bar. Perfect for this year's Peter Cushing celebration! 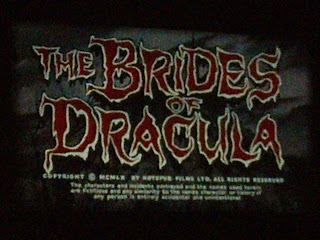 Friday night's lineup began with "Brides of Dracula", Hammer's 1960 sequel to their original 1958 "Dracula" starring Christopher Lee (known in the US as "Horror of Dracula").  "Brides of Dracula" doesn't have Christopher Lee in it, as a voiceover narration reassures us that Count Dracula is indeed dead. However, Cushing is back as Van Helsing, and this time he investigates another outbreak of vampirism in Transylvania, propagated this time by a certain Baron Meinster (David Peel). As the film opens, Meinster is being kept chained in his castle by his mother (Martita Hunt), who is in the habit of bringing young girls to the castle so that they may be his victim. This time, though, Meinster convinces the girl to unchain him, and he's on the loose once more. Cushing is great as usual in this, only the second time he ever played Van Helsing, and the story isn't bad at all. It's easy to see why they brought Drac back for the next one though, as Christopher Lee's presence is sorely lacking. 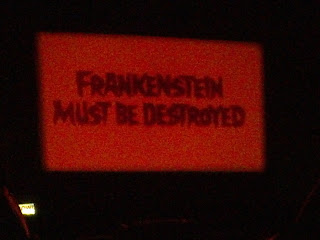 1969's "Frankenstein Must Be Destroyed" is another one I've missed all these years, and it's one of the stronger Frankenstein entries I've seen yet. Cushing's Dr. Frankenstein returns yet again to continue his experiments, which always seem to change with each movie.  In the first he pieced together a body from various parts and brought it to life. In "Frankenstein Created Woman", he had a method of trapping a person's soul and implanting it into another body. Now in "Frankenstein Must Be Destroyed", he is working on brain transplant techniques, with a colleague that somehow we've never heard about in all the other films. His colleague, Dr. Brandt, is in an insane asylum, which leads Frankenstein to break him out and transplant his brain in order to cure his insanity. This was one of the more disturbing Hammer "Frankenstein" films I've seen, as the actors were all very good and mostly convincing. The 'creature', which is of course Dr. Brandt's brain in another man's body, is compelling because once his brain has been transplanted he's treated like a monster, even though he's perfectly rational and otherwise normal. It's a gruesome idea but also really scary on an existential level--is everything we are contained in our brains? Is that where "we" live? Would we still feel the same if we were in another body?  Hammer's Frankenstein movies are always bleak and gory, but they sometimes poke your brain a little, too. 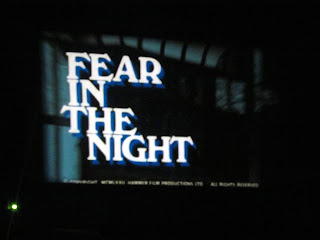 1972's "Fear in the Night" was another film I was completely unfamiliar with. One of the weirder Hammer films, this one was about Peggy (Judy Geeson), a young woman recovering from a nervous breakdown who meets a man named Robert (Ralph Bates) and marries him. Before she can leave to move in with him, she is attacked in her apartment by a man with a prosthetic arm who tries to strangle her. After she recovers from that incident, she moves in with her new husband at the remote boys school where he serves as an instructor. She quickly discovers something eerie is going on, since there don't seem to be any students. Cushing is the mysterious headmaster who happens to have a prosthetic arm, and soon after she arrives at the school, she is once again attacked by the mysterious figure. Joan Collins also appears as Cushing's icy wife, and now you can probably see exactly where the story goes. I really got into this film's atmosphere, although it wasn't perfect. The plot was a little obvious, with some strong similarities to "Diabolique", and something about the whole movie doesn't click, although Cushing does give an effectively ambiguous performance. 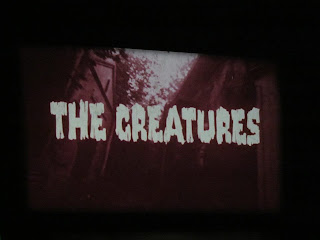 The final feature for Friday night was "From Beyond the Grave", a 1974 anthology film from Amicus Films. I was thrilled that our print featured one of the film's alternate titles, "The Creatures". Cushing is a shopkeeper with an antiques store known as Temptations Ltd, and the four segments of the film focus on different customers who attempt to cheat him in some way and suffer cruel fates because of the cursed items they've purchased. Although it's got some great atmospheric cinematography and sets, the stories are a little dull, especially a humorous one about a man who consults a medium to get rid of an invisible demonic entity perched on his shoulder. The best story is the first, in which a young man buys a large ornate mirror containing a ghastly apparition that compels him to kill people. 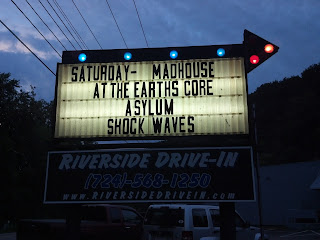 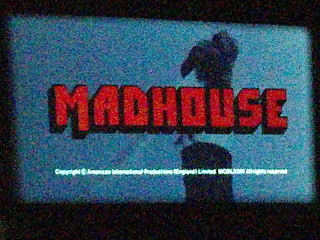 Saturday night's program was even better, kicking off with "Madhouse", another Amicus picture starring not only Peter Cushing, but Vincent Price and Robert Quarry. If Christopher Lee had somehow made an appearance in the movie, nirvana may have been reached. "Madhouse" is a morbid slasher film in which Price stars as a horror movie actor named Paul Toombes. Paul suffers a breakdown when his fiance is murdered just before their wedding, her head cut off and then reattached to her shoulders so that when Paul comes up behind her and tries to kiss her, it falls off onto her dressing table. Due to a blackout he suffered before the incident, Paul is not sure whether or not he committed this crime. He's acquitted of the murder, but confined to an institution for over a decade. Upon his release, he resumes his horror career playing the same character, and murders start happening again, with the victims killed in exactly the same way as characters in Paul's films. Although it sounds like a plot that's been done many times before, "Madhouse" is actually a lot better than the premise itself. There's a glaring absence of gore and any actual violence in the film is tame and fairly bloodless (especially the opening decapitation), but the bizarre plot features a number of creepy ideas, such as a former actress that Paul worked with who suffers her own cruel fate while Paul is institutionalized and emerges as a burn victim living in self-imposed exile in a basement with a bunch of spiders that she keeps as pets.
"At the Earth's Core" from 1976 was another flick I'd never seen before, and what a hoot it was. Cushing stars alongside Doug McClure ("The Land that Time Forgot", "The People that Time Forgot", "Humanoids from the Deep") as a daffy scientist who creates a manned vehicle to drill through the Earth's crust. He and his assistant, David (McClure) wind up going too far and find themselves in an underground cavern fed by volcanoes and containing a number of bizarre prehistoric monsters and human tribes. The story, from a novel by Edgar Rice Burroughs, is quite simply ridiculous, and so are the special effects. This was not a problem for me though, and I loved this movie in the same way I love the movie "Infra Man" and other monster flicks that had a less-than-stellar budget. The thing that irritated me about "At the Earth's Core" was the script, which contained countless utterances of "David!" from Cushing. "David! Look at this plant! David! Look out! Look over here, David! David! David!" At one point, he cries out "David!" and somebody whips him for it, and I felt a momentary sense of happiness wash over the audience. 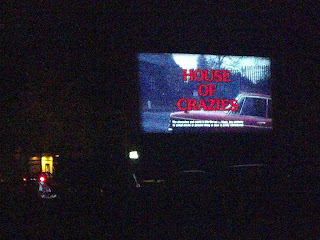 The third Saturday feature was "Asylum", shown here under its 1980 American re-release title "House of Crazies". A young doctor arrives at a rural insane asylum to interview for a position, and is given a challenge: he must visit with the asylum's four patients and decide for himself which of the four are the mysterious Dr. Starr, former director of the institution who has gone mad and become a patient. The four stories contained here are much more weird and unexpected than "From Beyond the Grave", with the exception of a silly dual personality story starring Charlotte Rampling that you can see coming from a mile away. But nothing could really prepare you for the opening story, in which a philandering husband and his mistress (none other than Barbara Parkins) plot to murder his wife. The husband chops her up into little pieces, wraps the body parts in brown paper and stores them in a freezer in the basement. Thanks to the wife's interest in black magic, the body parts become reanimated and attack both of them, strangling the husband and attacking Parkins when she arrives at the house. "Asylum" really works because the wraparound story is a good one too, with a genuinely creepy moment when the elusive Dr. Starr murders someone, leans over the body with a stethoscope and listens for a heartbeat, then lets out this hair-raising insane laughter. 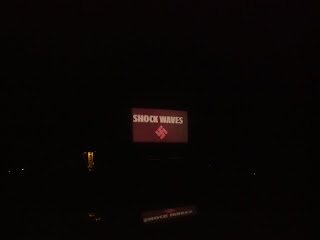 The final movie of the weekend was the one I was most anxious to see, 1977's "Shock Waves". I discovered "Shock Waves" years ago on home video and immediately fell in love with it. A small group of tourists on a chartered yacht encounter a strange phenomenon when their compasses go haywire, the sky turns orange, and they are later rammed by what appears to be an immense ship. When dawn comes, they learn the ship that hit them is a rusted out wreck on the reef of a nearby island. Forced to leave the boat due to the damage from the ship, the party soon learns that they're being stalked by a group of waterlogged zombies, products of a German experiment to create unkillable soldiers for use in World War II. The commander of the project, played by Peter Cushing, is the only inhabitant of the island, living in self-imposed exile. The return of the ship, and the return of the zombies, signals the end for him and anybody else who can't escape the island in time. "Shock Waves" suffers from poor editing and pacing, along with muddled motivations. Countless times we see the zombies getting in and out of the water, for no apparent reason, intercut with scenes of victims hiding in places on land, and in a few places there seemed to have been scenes cut out, resulting in a confused narrative. There is also very little gore, as the zombies don't want to eat you, just drown you. These flaws don't hurt the movie too much though, and they actually contribute to the dreamlike atmosphere a great deal. The zombies are very cool, too. 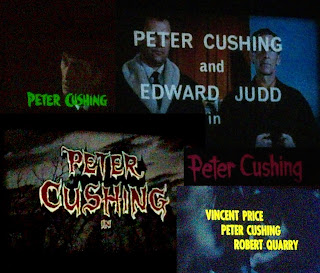 What a great program it was this year! Being the huge Cushing fan that I am, I was thrilled to see so many films at once in which he appeared. Even the trailers in between the films were mostly for Peter Cushing movies--even "Star Wars"! The weather was decent as well, just a little bit of rain on Saturday night. It got cold Friday night too, but you have to come prepared for these drive-in marathons. Speaking of being prepared, I am glad the Riverside is prepared to deal with people who have a dead battery at the end of the night...my car wouldn't start Saturday. Thanks for the jump, guys, and hope to see you in April for the second annual April Ghouls! 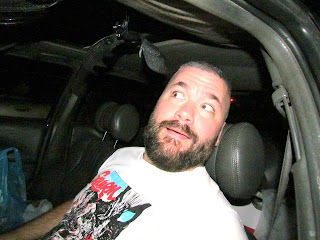 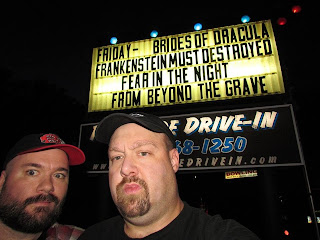 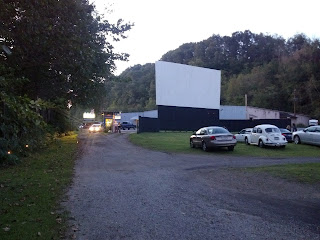 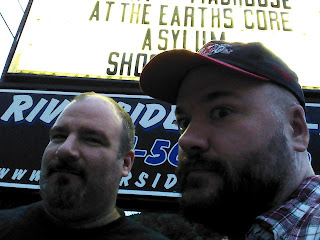 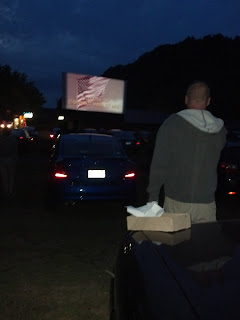 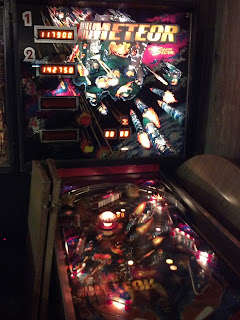 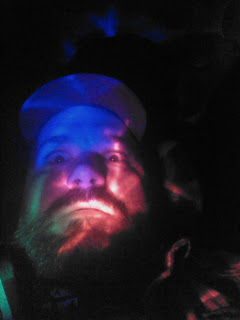 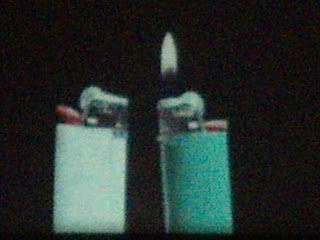 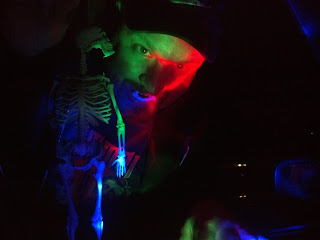 Posted by GroovyDoom at 1:05 AM

Riverside Drive In should cut you in for all the promotion!