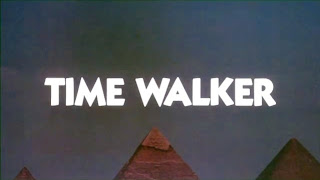 Usually when I write about these favorite (and unfavorite) films of mine, I spoil most of their surprises, but I do include a disclaimer over there in the side bar, too.  I warn you.  The people who made "Time Walker" aren't so polite, because at some point during this movie's life, someone decided to retitle it "Being From Another Planet". Sadly, this nifty little twist is just about the most interesting thing the film has to give, and talk about giving away your pie with breakfast...imagine if "Fight Club" had been titled "They Were Both The Same Person". Even with the non-spoiler title "Time Walker", the film's poster positions the film as if it's about a malevolent alien. So, since the producers of "Time Walker" didn't care about spoiling their movie, neither do I. 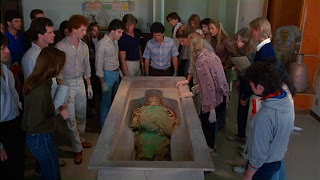 "Time Walker" opens with an archaeological dig inside King Tut's tomb. A team from the "California Institute of the Sciences", spearheaded by Professor Douglas McCadden, discovers a sarcophagus and takes it back to said "California Institute of the Sciences" (which might not be a real thing, since it only has one reference on Google not related to this movie). Once there, they open it and discover a mummy covered in green dust, which they hypothesize is some sort of dormant mold. When they x-ray the mummy, the radiation activates the mold, which now consumes the flesh of anybody who touches it. It also brings the mummy back to life, and it has an agenda: a scheming college student named Pete (Kevin "Lucan" Brophy!) discovers a hidden compartment in the sarcophagus that contains five "crystals", which he naturally steals and tries to get money for. Nobody believes him that they are 2000 years old, probably because they're totally not 2000 years old and look just like the decorative prisms you can buy in any new age store or bead shop. So instead, the kid gives them to hot college chicks, which puts them in harm's way when the mummy starts tracking them down to reclaim them.
The "mummy" of course is not a mummy at all, it's an alien being that was discovered in the desert by ancient Egyptians. When they brought it back to nurse this "stranger" back to health, the green mold killed anybody who touched him, including King Tut. The bodies were sealed inside the tomb to keep the mold from killing anybody else, and now these fools have unearthed it. Ha! 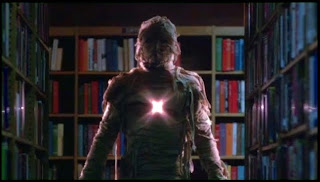 OK, I admit I'm totally in love with that cheesy concept, and it could have made "Time Walker" a really enjoyable movie. I love the idea that it's a walking mummy movie, and it turns out to be an alien being. There are some cult luminaries in the film, not the least of which is Austin Stoker ("Abby", "Assault on Precinct 13", "Horror High"), who doesn't have a big enough role. Sometimes it IS the size that counts, people, and when you have a recognizable name, you go with that. James Karen is also in the cast, playing a sleazy university bigwig...isn't it crazy that James Karen appeared in this the same year he appeared in Spielberg's Tobe Hooper's "Poltergeist"? Nina Axelrod ("Motel Hell") is here too as the "good girl" female lead, Susie. Interestingly, another cast member of "Assault on Precinct 13" appears here in a minor role, Darwin Joston. 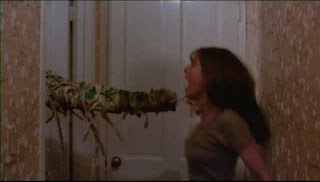 As it stands, though, this movie is only mildly appealing. It's compellingly silly enough to be enjoyable as a bad movie, but I can't figure out what the filmmakers were going for here, because it's a PG rated horror flick with very little gore and a modest body count. The director, Tom Kennedy, has only a few IMDB credits. "Time Walker" is his only directorial credit, and he seems to have worked mostly in TV, which might explain why this film resembles a TV movie in both its presentation and content. The cinematography is mostly unremarkable, with only a few spooky movie tropes in use here. There are numerous mummy point-of-view shots that are tinted green, but not much terror on hand at all. One mildly suspenseful sequence has the mummy going after Susie while she does research in the library, which is apparently abandoned because she does not encounter one single person when she starts screaming and running from it. There's also a menacing moment when one of the crystals ends up in the possession of a ditzy coed who is babysitting, and it's in the baby's crib when the mummy comes to collect it. The mummy doesn't actually kill many people though, and it doesn't hurt the baby. The coed though ends up with the green mold on her, which eats her face off when the doctors x-ray her. The mold scenes are really the only gory moments in the entire movie, and there are only two of them.

The biggest thing that makes "Time Walker" look like a TV movie is its conclusion, which is one of the lamest climaxes in stupid movie history. The alien, which actually doesn't want to hurt anybody, collects all of his crystals, which he uses to transport himself home by inserting them into a triangular device. McCadden gets shot when one of the villainous goons in the movie tries to shoot the alien, and the alien grabs ahold of him and together they vanish in a cheesy neon special effect shot. Then immediately afterwards, the words "TO BE CONTINUED...." come up, and the credits roll. Yeah, the filmmakers decided a movie doesn't really need a proper ending, not when you can just throw the words "TO BE CONTINUED" up and insinuate there will be a sequel.
Up until that point, "Time Walker" manages to limp along in its bandages, full of stilted acting, mildly effective special effects, and super cheesy music. Don't miss the rollicking frat party scene, where those crazy 30-something college kids have a mummy party and rock out to a song called "Mummified". 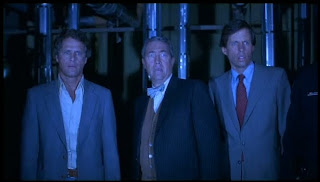 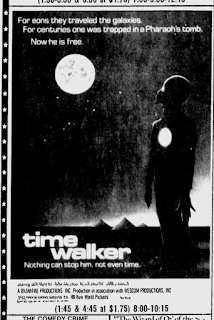 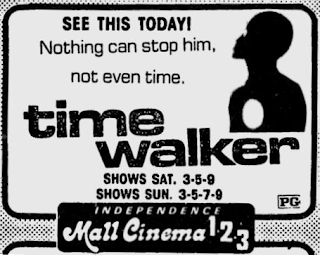 As of this writing, you can watch "Time Walker" on YouTube here:

One one the best films ever. There's nothing like it. For better or worse, yes...But Timewalker shines like a diamond in a dirty and miserable world. It's up there with Kane, Vertigo and Raging Bull