Few films are as hallowed in my humble world as 1973's "Don't Look In The Basement", directed by low budget auteur S.F. Brownrigg. With a modest five films in his repertoire, four of them are horror films, the last of which was 1976's "Keep My Grave Open". Having never seen it before, I was pleased to discover that it was indeed like his other films, ultra low on budget and deliriously high in rural gothic atmosphere. Like a Texan John Waters, Brownrigg made most of his no-budget films with recurring actors and actresses, and many of them appear in this one. The most notable is lead actress Camilla Carr, whose role in "Don't Look In The Basement" was that of Harriet, the unbalanced, murderous woman who thought her baby doll was a real baby.  Here, Carr plays Lesley Fontaine, a disturbed young woman who lives in an isolated rural mansion, and whoo baby does she ever go off the deep end. 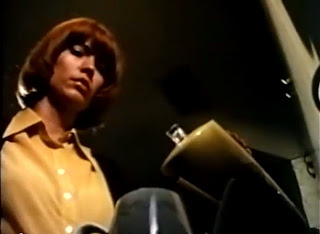 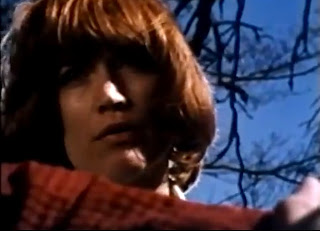 Brownrigg opens the film with a lengthy sequence involving a transient man hitchhiking along a rural road.  He comes to a large house off the beaten path, and wanders up to it. Finding nobody at home after calling out numerous times, the man goes inside and raids the refrigerator of some food, including a large steak. When he takes the food away and builds a fire to cook the steak, he is swiftly approached by a shadowy figure that kills him with a large sword. 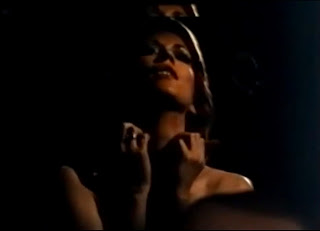 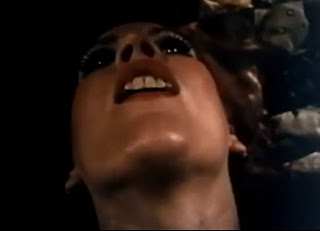 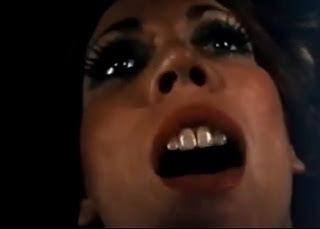 As the hitch hiker is killed, Brownrigg uses one of my favorite horror movie tropes: someone strikes a death blow with a knife, and there's an abrupt jump cut to a butcher chopping meat in a deli. This is where we meet Lesley, doing her grocery shopping in a small general store (replacing those stolen groceries, of course), but when she returns to the mansion, we learn that she seems to share it with "Kevin", an off-screen person that refuses to answer her from behind his locked bedroom door. It isn't long before we realize we will never see Kevin, and that Lesley has a dual personality thing going on. A few people come into contact with the reclusive Lesley, including her psychiatrist, Dr. Emerson (Gene Ross) and a young man named Robert (Stephen Tobolowsky) who tends to Lesley's horse. Dr. Emerson seems to know all about "Kevin", although we're not sure exactly who Kevin is, or was, or if he ever was. 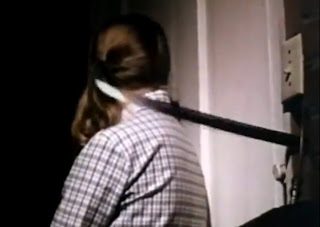 Lesley dresses up like Kevin though, and goes all stab-happy. First Robert's girlfriend Suzie (Ann Stafford) gets skewered, and her death scene is the film's best: "Kevin" locks her in her room, but Suzie doesn't know she's in trouble, completely oblivious to a moment where the sword comes stabbing inward at her from between the door and the jamb. She slowly starts to panic until she's frantic and she gets impaled while leaning against the door again. We learn that Kevin is/was Lesley's brother, and also that Lesley's problems stem from her incestuous attachment to him. In an overly indulgent sequence, Brownrigg shows Lesley making herself as sensual as possible for Kevin, putting on makeup and a dress and then drifting weirdly to Kevin's bedroom, where the camera gets on top of her in bed for what seems to be a first-person sex scene. Camilla Carr makes Lesley a very compelling anti-heroine, the heartbreaking way she meticulously makes up her face and dresses in order to seduce Kevin into loving her. Just as she's "rejected" by Kevin, Robert arrives and she refocuses her seductive tactics on him, ultimately blackmailing him into having sex with her and then dressing up like Kevin to dispatch Robert with the sword. 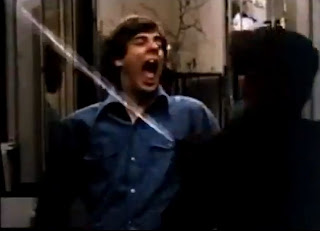 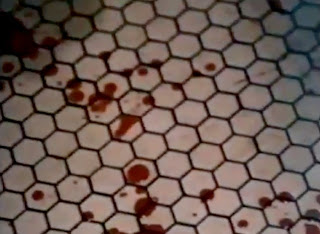 The film is meandering and slow paced, and Brownrigg is definitely an acquired taste. The murder sequences are not the point of the film, although they're definitely intended to titillate the audience with the potential for blood and guts. Alas, "Keep My Grave Open" is much more reserved than the bloody "Don't Look In The Basement", and here Brownrigg seems less concerned with the murderous aspects of Lesley's breakdown. Her rampage is a lot like Catherine Deneuve's extended freak-out in "Repulsion", mostly based on what's going on in Lesley's warped mind.  There's isn't much of a story here, as it's just a matter of people who are unfortunate enough to wander into Lesley's path, but there is indeed depth to Lesley's character. At the film's conclusion, she reveals to Dr. Emerson the fateful event that seems to have caused her fractured psyche: a moment when Lesley's cruel and abusive aunt caught her innocently changing her dress in the same room as her brother and tormented her for it. When Lesley tries to seduce Emerson, he instead leaves to bring help for Lesley, which she knows will lead to the discovery of her crimes. Rather than face up to her actions, Lesley commits suicide by overdosing on pills; when she drops the glass pill bottle in her sink, she scoops up the pills as well as the broken glass and swallows both. 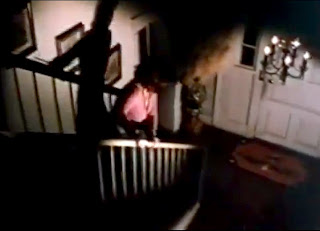 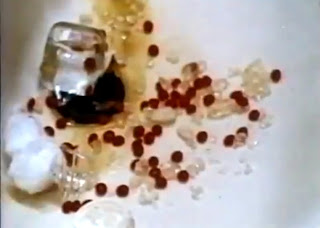 Maybe the strangest thing about "Keep My Grave Open" is how it never really gives the viewer a definitive answer about Kevin's identity. All along we've assumed Kevin to be either dead or a figment of Lesley's imagination, but as she stumbles out onto the front porch and slowly dies from the pills, Kevin's shadowy figure emerges onto the balcony above her, watching. She looks up at him and we're not really sure if he's there, or if she's imagining him. But then he appears the next day at Lesley's grave, too, dressed exactly as Lesley used to dress when she committed murders while wearing his clothes. He then returns to the mansion and speaks to Lesley, who is no longer there, the same way she spoke to him when he wasn't there.

Brownrigg made his films for audiences who were usually viewing them late at night as B features in a drive-in theater, and even though he didn't have much money to make these movies, he understood how to make them watchable and interesting. Some directors just threw these kinds of movies together and didn't care about the final product, but S.F. Brownrigg was definitely an artist and had a unique downbeat vision. Several sequences in the film seem to be more lengthy that necessary, possibly to pad out the film to feature length (it already runs just barely under 80 minutes), but it's this kind of indulgence that makes me think of Brownrigg as an auteur. Lesley's 'makeup' scene goes on and on, giving us excruciating closeups of her lips, but combined with the disorienting soundtrack music it also has a hypnotic effect, especially considering it occurs at night in the mansion, while Lesley's madness is in full swing. Another lengthy sequence occurs when Lesley stalks a prostitute she has brought back to the house for "Kevin". When Lesley appears in her Kevin outfit, the prostitute takes off, and unlike the other victims in the film, she fights back effectively, wounding Lesley and almost getting away. Almost.

"Keep My Grave Open" benefits greatly from Camilla Carr's performance, but most of the other actors are good, too. As I mentioned before, there are several holdovers from "Don't Look In The Basement", including Gene Ross, Jessie Lee Fulton, and the wonderful Annabelle Weenick, whose performance as Dr. Masters in "Basement" was unforgettable. The soundtrack music was done by Robert Farrar, who scored all of Brownrigg's horror films, and it's extremely similar in tone, with repeating riffs that effectively communicate the films anxiety and unstable atmosphere. Unfortunately, S.F. Brownrigg only made a few films, but the ones he left us with are worth revisiting, just to get that grungy, creepy feeling that he was so good at creating. 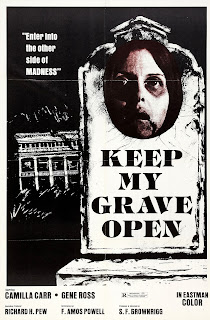 Posted by GroovyDoom at 3:14 PM

great thoughtful review. Brownrigg is creative and downbeat as you said. I learned a lot from your post.

The ref to Repulsion is spot on. The Tenant, however, is even closer - right down to the end scene. Brownrigg kind of makes me think Larry Buchanan meets Roman Polanski.