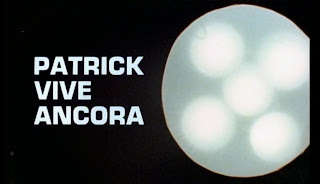 I remember 1978's "Patrick" was one of those films with a super-scary ad campaign and when I finally caught it on HBO or wherever, it was totally boring. I guess there's only so much you can do with a guy lying in a hospital bed with his eyes wide open. Well, leave it to Italian exploitation filmmakers to show us how to do it the RIGHT way, dammit.  "Patrick" did enough box office in Italy to justify them making their own unofficial sequel to the film "Patrick Still Lives".

Just like "Zombi 2", "Alien 2: Sulla Terra", and a whole bunch of other 2s and 3s, "Patrick Still Lives" was not produced by anybody associated with the original "Patrick", and is the cinematic equivalent of fan fiction. Oh but what fanfic it is! While I remember fighting to stay awake watching "Patrick", I never once got bored watching "Patrick Still Lives". This movie is nuts-a-roni. 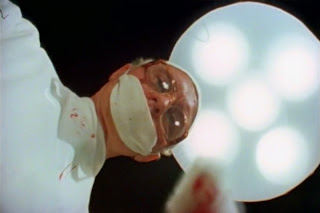 Actually "Patrick Still Lives" is more of a remake than a sequel, since it reimagines the entire scenario. Whereas the original Patrick was in a coma after murdering his mother and her lover, THIS Patrick has a different background. He's stranded on the side of the road with his father when a small bus drives by, and someone throws a bottle (or something) out of the window at him. It strikes him in the head, gets his face real bloody, and apparently after screaming for 30 seconds he falls into a coma. At some undisclosed point in time later, Patrick's father invites the passengers of the bus to a free vacation at his semi-deserted "resort", where an honest to goodness mad scientists laboratory houses a comatose but telekinetic Patrick.  It also gets them within harm's way so Patrick can kill them in various bizarre ways.  The "experiment", conducted by Patrick's father, involves the use of three other comatose patients, as well as a small staff of white-coat stooges. That's about as deep as it gets, and since there's no real mystery in the story itself, this really is a movie about bizarre murders. The victims are almost entirely loathsome people in every way, which we already know because they so callously tossed a bottle out of a moving vehicle. We never even know who tossed that fateful bottle, and apparently Patrick doesn't care, either. They are slobbering alcoholics, shrewish manipulators, and arrogant pricks, so the movie doesn't even want you to care when they die. 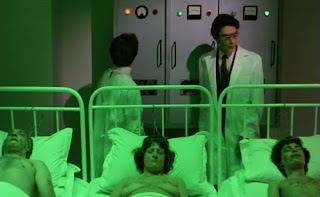 And die they do, in bizarre ways that usually don't make any sense, even with the concept of telekinesis. The first victim dies when he goes out for a midnight swim and suddenly a telekinetic wind blows up. For some reason, the pool starts boiling, and even though he's hanging onto the side of it, he never tries to pull himself out. The body is lying on the ground NEXT to the pool the following morning, boiled, but the doctor explains the death to the other vacationers as something that can happen to any alcoholic. I was trying to absorb the impact of that statement when I suddenly realized the other purpose for "Patrick Still Lives": to show gratuitous nudity, most of it female. Unless you count one scene where Patrick has telepathy-sex with a nude woman who writhes on a suspiciously comfortable-looking couch next to his hospital bed, the movie has no sex scenes, just a lot of nakedness. It was seriously "Showgirls"-level stuff. And it's not just brief nudity, either. One scene shows a woman sleeping nude (and conveniently uncovered) while a man sneaks into her bedroom to rifle through her belongings. Another unforgettable moment is when a woman struts down to the pool wearing a two-piece red outfit, the top part of which she has removed and is swinging casually around in her hand. There's a great moment when one nude woman puts on a robe, of course never bothering to fasten it in the front, and does a total Sharon Stone from "Basic Instinct 2" and crashes a dinner party. But what really made me take notice is when a scene was included that not only shows a nude man getting out of bed, but he also turns a little for a frontal glimpse...a rarity in a non-sexual scene. It reminded me a little of Sam Elliot's nude scene in "The Legacy" (which, unfortunately, did not include a glimpse of anything frontal). I suddenly thought "Ohhh...THAT'S why straight guys put up with all this stupid shit if there's naked women in a movie!" It was a momentary revelation.


The silliness of the script made it difficult to relate to what was going on, and there isn't much in "Patrick Still Lives" that is scary. The manor is well lit for a spooky movie, and the film has a strange atmosphere, but the characters are utter "Burial Ground"-level morons. As if nobody in the small party of people can make the connection about what they all have in common, like...that time we threw a bottle out the window and that guy fell into a coma?  The movie comes with English subtitles where the doctor has a classic bad-movie line and says one of the deaths was "due to a fatality." There's also a really ridiculous visual effect the movie keeps repeating, where the screen goes green and a pair of superimposed eyes confronts each victim before their deaths. It's very Pac-Man, after you swallow the blue ghosts.


Speaking of "Burial Ground", "Patrick Still Lives" was filmed at the exact same manor, and there are some great set pieces involving the house and grounds. The pervasive gore reminded me a lot of "Burial Ground", too. One victim is cornered in a large, barren courtyard and hanged by a hook through the neck, while another is decapitated by a car window. One unfortunate woman is ripped apart by 'vicious dogs' in the basement--that is to say, normal dogs eating meat embedded in a mannequin. But there's one murder that ranks up there with one of the more disturbing things I've ever seen: a woman is gored lengthwise by a long fire poker that...um....well, goes in one end, and slowly makes its way until it's poking out of her mouth. Sicko! 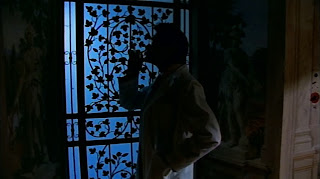 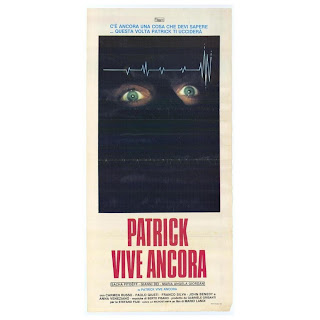