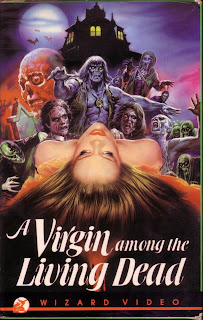 The passing of director Jess Franco earlier this week inspired me to revisit his bizarre film that's known in English-speaking countries as "A Virgin Among the Living Dead". Franco made the film in 1971, following the sudden accidental death of actress Soledad Miranda, Franco's gorgeous female star of his "Count Dracula" remake and one of his key films, "Vampyros Lesbos". With a multi-movie deal secured for both himself and Miranda, Franco was dealt a stunning blow when she died in a violent car crash. The themes of "A Virgin Among the Living Dead" seem influenced by this experience for the director, the project being a largely personal production, a disjointed erotic fantasy about the barrier between life and death. 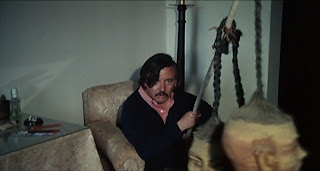 An international production to begin with (partially funded by a French producer), the film is a loosely constructed series of scenes that contains varying footage based on the country of whatever print you happen to be watching. In its original form created by the director, the movie is best described as an erotic supernatural mood piece. Already heavy on the nudity, in some European markets the movie featured addtional nude scenes that emphasized the film's softcore porn aspects, while other footage was deleted. The version most familiar to American audiences is the Wizard Video release that was a staple on video rental shelves throughout the 1980s, featuring an attention-grabbing oversized box with artwork that had nothing to do with the movie itself.  This cut of the film is even more different, now re-edited and padded with new unrelated zombie scenes shot almost ten year after the fact by Jean Rollin. The haphazard editing makes the film even more incomprehensible, and viewers were most likely left annoyed and confused. "A Virgin Among the Living Dead" was eventually released on DVD as part of Image Entertainment's "EuroShock" collection in a version that represents Franco's original version of the film, with the dreadful additional footage isolated as a bonus feature instead of being spliced into the movie itself. 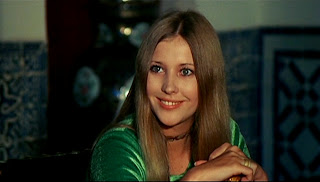 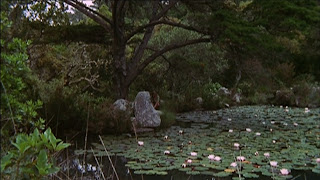 The film in its original form is not so much a horror film as it is an art house experiment, possessing a dreamlike quality that works extremely well. A young woman named Christina (Christina Von Blanc) travels to Monserat, the isolated villa of her estranged family. She's never even met her father, who has recently committed suicide, and the reading of the will is what draws her to the castle. In grand horror movie tradition, the locals are confused and upset when they realize her destination is Monserat, which they tell her is deserted. She finds her freaked out family members living there, including her uncle Howard (Howard Vernon), her aunt Abigail (Rosa Palomar), a sexy young woman named Carmence (Britt Nichols), and a gentle blind woman named Linda (Linda Hastreiter). Also lurking at the mansion is the strange servant Basilio, played by Jess Franco himself. Christina's stepmother, Hermione, is on her deathbed upon Christina's arrival, and she expires just as she tells Christina to run away. Christina seems determined to ignore any signs of anything strange going on, however, and the reading of her father's will makes her the sole heir to the castle. That's the extent of the film's plot, with most of the scenes showing Christina exploring the castle area, meeting locals who tell her nobody lives there, and having a series of dreams that feature an ominous sense of foreboding and disturbing sexual images. The personification of death appears several times in the movie, depicted as a beautiful woman, and Christina has visions of her dead father speaking to her, warning her to leave the castle before it is too late for her. Of course everyone Christina has encountered at the castle is actually dead, and she even seems to understand this eventually. Her attraction to a strange, still pond full of vegetation resolves itself at the eerie conclusion of the film, as the personification of death walks together with her into the water and they disappear underneath the surface while Christina's relatives follow them. 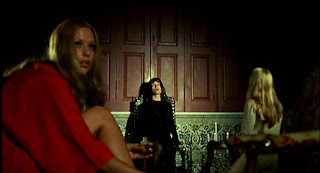 "A Virgin Among the Living Dead" shares thematic similarities with a number of other films, chiefly Mario Bava's "Lisa and the Devil". Franco's film isn't quite as visually flamboyant as that movie, but he does have some interesting camerawork, as well as a Bava-esque habit of overusing the zoom lens. There are also similarities to Herk Harvey's "Carnival of Souls", but the most derivative elements of the film are the unrelated zombie scenes that were spliced into some of the prints ten years after the fact, when zombies became marketable and the movie was being repackaged for home video. The footage never really fit into the movie in any form, although attempts were made to make the actress in the scenes resemble Christina Von Blanc, but the biggest offense is that they just plain suck. The same scene repeats several times throughout the movie, to varying degrees of completion: a young woman (who is clearly not Christina Von Blanc) rises from bed and wanders out into the woods in her nightgown, where zombies rise from piles of leaves and follow her. She runs back to the house and finds more zombies congregating there. They slowly--and I do mean slowly--make their way into her bedroom, stand around her in a circle, make faces at her and pull her hair, and that's about all. Try not to have nightmares after watching that scene, just try. Considering that this movie was actually retitled again on home video as "Zombie 4: A Virgin Among the Living Dead", you start to get the idea that anybody who might have hoped to see some gory zombie action in this movie was sorely disappointed.

Posted by GroovyDoom at 1:07 AM

The French dub is Franco's original intent since at least three of the main characters seem to be speaking French. It contains all of the film's soundtrack (notice how the music abruptly stops in the English dub) and the performances are actually quite good. Many people seem to prefer watching the godawful English dub and then criticizing the movie based on it.

The DVD versions don't seem to have that scene with Franco dangling those heads. Could you tell me what happens in that scene and at what point of the movie it occurs (what happens before and after it)?