In the late 70s, I was a horror movie obsessed kid. I was getting too old for Dracula and Frankenstein anymore, and there were exploitation movies being advertised on television that I was frothing at the mouth to see. One of them was "Halloween", and while scanning TV channels one day, I stumbled across a PBS program called "Sneak Previews" where Gene Siskel and Roger Ebert were discussing the movie and actually showing clips. Being interested in horror movies as a kid at that time was often looked at with suspicion by adults who loved to say that horror movies were a bad influence, but these two critics were praising the film for qualities that went beyond the fact that it was "really scary". They complimented the direction of the film, something I had never even considered before that point, and pointed out things like the lighting and the acting. I started watching the program every week, especially when I noticed their tendency to feature horror films in their trash-talking segment "Dog of the Week". I thought their outrage at some of the films was funny, mostly because on some level I felt that they were taking the movies way too seriously.

Roger Ebert seemed to like horror movies much more than Gene Siskel did. I remember his four-star rating for "Dawn of the Dead" was featured on the cover of the VHS rental, where bold lettering declared "A savagely Satanic vision of America". Gene Siskel, however, admitted that he left the movie within the first 15 minutes. Over the years, I read Roger Ebert's reviews and learned how to love movies. It wasn't that I shared his affection for movies like "On Golden Pond" or "A Room With A View", but he communicated his love of cinema so well that it changed the way I watched movies.

Eventually I learned to love more about Roger Ebert. He possessed a great intelligence and communicated so effectively, it was hard to not pay attention to his opinions. It was easy to tell from the way he talked about women in films that he loved and respected women, especially the way he was offended by the misogyny he perceived in slasher films. His review of "I Spit On Your Grave" was memorable because of his utter outrage at the film's demoralizing rape scenes and bloody revenge murders. I remember Roger as being one of the first commentators I noticed who seemed to accept all people as equal human beings, regardless of race, gender, class, or sexual identity--the parts of our personalities that people often get hung up on. In more recent years, after his surgery turned him into an avid blogger, I was always interested to read the opinions he shared there. It was a personal side of him that I had always been curious about, and it showed me what a kind, funny, and beautifully rational voice he was. He inspired me in the way he regarded both art and life, and he will continue to inspire me in the various forms of recorded communication he left behind.

Like many, many others in this world, I will greatly and sincerely miss Roger Ebert. 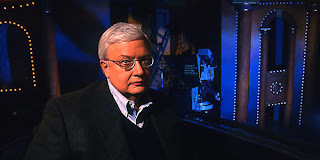 Posted by GroovyDoom at 1:15 AM