The April Ghouls Monsterrama this weekend at the Riverside Drive-In was a blast, and hopefully this will also be a yearly event like the Super Drive-In Monsterrama that happens in September.  I had to miss the first night, which featured an all-80s lineup of "Friday the 13th", "The Burning", "Day of the Dead", and "Return of the Living Dead", but I was told the turnout was amazing with over 120 cars. I attended the Saturday lineup, and although it looked to be a little less than that, the program was an all-out 70s experience that really blew my mind in a major way. If you weren't there but wish you were, then read on, cause it went something like THIS....

SCREAM, BLACULA, SCREAM (1973) - This deranged sequel to "Blacula" started things off on a decidedly high note, and set the tone for the evening rather nicely. It was a little less widely seen than "Blacula", at least on TV when my vampire radar was in full force; despite "Blacula" being one of my favorites as a kid, I never managed to see the sequel until home video. Although it has some pretty jive-ass parts to it, like when Blacula flies over sleazy LA in the form of a superimposed bat, "Scream Blacula Scream" is actually a very strong movie in terms of its horror cred and violent, animalistic vampires.  Cult cinema luminary Pam Grier costars as a member of a voodoo sect who succeeds the dying Mama Loa, much to the irritation of fellow cult member Willis, who felt he should have been the successor. Willis vows revenge and acquires the bones of Prince Mamuwalde (aka Blacula) through some kind of magic artifact salesperson--really, how does one find these things for sale?--and pretty soon a resurrection takes place. But Blacula works for nobody, and immediately vampirizes Willis. Soon he becomes infatuated with Lisa, and as the other cult members start to turn into vampires, Mamuwalde tries to get Lisa to perform a voodoo exorcism on him in order to rid him of his vampirism. Although Pam Grier is the lead, a lot of the attention goes to cult members as they're slowly all victimized, and there are a few memorable vampire attacks. One of them has Willis pursuing a terrified, screaming female victim through an enormous dark house, ending when she's so out of her mind with terror that she faints, and there's an extended scene of him biting her neck and drinking her blood. Another great moment has a woman getting cut during a party, and Blacula sneaking up behind her while she looks in a mirror, unable to see him. 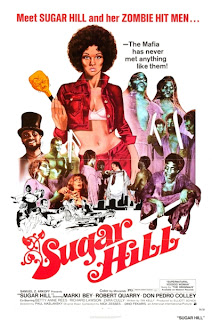 SUGAR HILL (1975) - Here's one that was a first for me, and what a freaked out trip it really was. A mixture of the a blaxploitation crime drama and horror movie, the plot concerns voluptuous fashion photographer Diana Hill, aka Sugar Hill. Some shady crooks are after Sugar's boyfriend for his nightclub, and when they kill him over it, Sugar decides to get revenge. After visiting the local ancient voodoo queen (played by Zara Kelly, who you might have seen as George Jefferson's mother on "The Jeffersons"), Sugar is able to summon the Lord of the Dead, who puts his team of murderous zombies at her disposal. One by one, she visits her man's killers until they've all died some sort of horrible death. The plot could have used a little tweaking, because it's a little bit obvious, but--holy shit, is that really Count Yorga in this movie?? YES, it's Robert Quarry as Sugar Hill's creepy white ganglord enemy! How can you not like a movie like that? 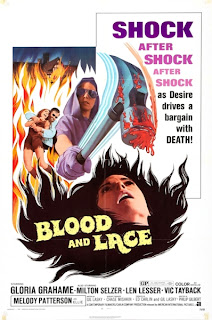 BLOOD AND LACE (1971) - Wow, where to begin here? This was definitely the insane highlight of the evening. "Blood and Lace" is one of those movies that takes place in some alternate reality where human beings don't behave the same way as they do in our dimension. The plot was so convoluted, it didn't unfold, it sort of just spread like a spiderweb crack in a windshield until the whole things was shattered and ruined. I have to admit, it really blew my mind. The film opens when a sleeping woman and her male bedmate are murdered with a hammer and then set on fire. The woman's young daughter, Ellie, is sent to an orphanage where she encounters other "unwanted" children who are treated in a sadistic manner by the owner, Mrs. Deere (Gloria Grahame). Mrs. Deere likes the money the kids bring in from the welfare department, she just doesn't like feeding them or caring for them. Or doing anything else except giving them orders, torturing them, or killing them and putting their bodies in the freezer. Aiding her is a skeezy handyman who probably smells like too much Old Spice.  Oh, and Vic Tayback is in the movie too, playing a detective who seems to be the only one interested in Ellie's well being. By the end of the movie, though, the plot has twisted so many times that you realize every character in the movie is a sociopath and is only interested in their own personal gain. Believe me, the plot deserves much more analysis but better yet, just watch the damn thing and marvel at its sheer insanity and nihilistic depravity. 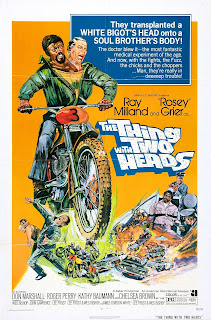 And speaking of depravity, what a great segue to the evening's final flick, the incomparable demented drive-in sicko called THE THING WITH TWO HEADS (1972). This bizarre movie seems to want to be the ultimate in comic relief regarding racial tension in the 70s, as the head of an Archie Bunker type is grafted onto the shoulders of a black dude who is none too happy to have it there.  Disembodied heads are a nightmare scenario as it stands--can you imagine being conscious, and the entirety of your being is simply your head, everything else is gone? Somehow Ray Milland has discovered a surgical process that has eluded the rest of the medical community, and he is able to graft a second head onto a single body, then remove the original head. Milland intends to have the procedure done to himself in order to transplant his own head from his dying body and give him a new chance at life. Unfortunately, a sudden turn for the worst renders him near death, and his cronies find a last minute "body donor" in black death row inmate Rosey Grier. An immediate war erupts on Grier's shoulders, with Milland making racist comments and Grier trying to find a way to remove Milland's head while saving his own.  An extended sequence involves the Thing With Two Heads stealing a motocross bike and taking off with a renegade brain surgeon on the back of the bike, then taking part in the race and evading police cars for a godawfully long period of time. It's kind of like going into a zen state, sitting in your car at 3am watching a bike race involving a man with two heads. I used to see this movie on TV when I was a kid, but I failed to remember lines like when Grier knocks on the door of his girlfriend, only to have her open the door, look at his extra head, and remark in disbelief "You get into more shit....!" Could this movie be the original "Human Centipede" body modification horror concept? The implications are staggering.

The allure of the Monsterama festivals has to do with the way they completely reject the contemporary filmgoing experience. It's a safe haven for horror fans who won't ever have to worry about having to sit through the remake of "Texas Chainsaw Massacre", a chance to relive a time period when truly unusual films got made all the time and we took this kind of thing for granted. It seemed drive-ins and the sleazy movies they often showed would always be there, and of course we know that's not what happened at all. The dubious 'advances' of the modern cineplex have put most places like the Riverside Drive-In out of business, but there's something here that can't ever be replicated in a shopping mall cinema where they remove a few rows of seats and call it "IMAX". The Monsterama gets me back in touch with the reasons I love horror movies in the first place, as well as one of ways I learned to enjoy them as a kid. I sat huddled in my car, wrapped in a sleeping bag, eating popcorn and pizza, and watching some of the craziest shit I'd seen in a long time. Life simply does not get much better than that for me. 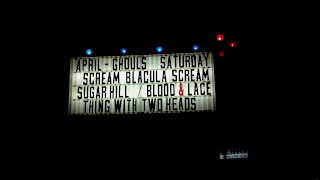 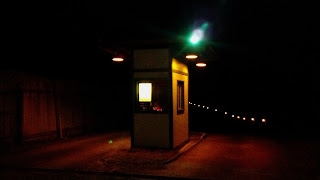 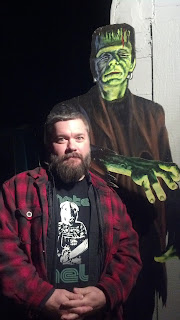 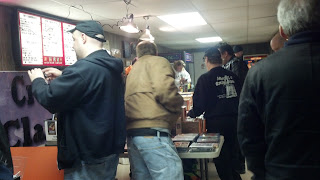 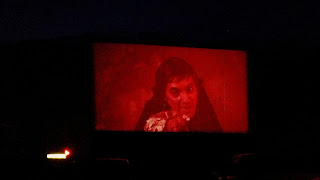 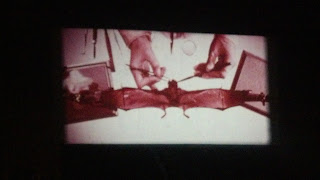 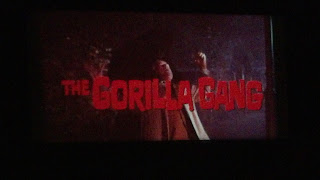 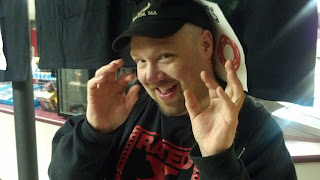 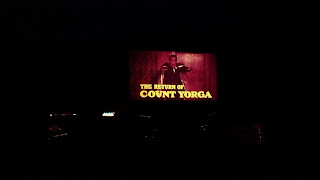 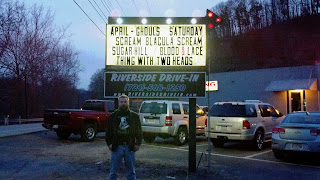 Posted by GroovyDoom at 3:01 AM