The Children (1980): The nuclear family unit goes up in yellow smoke! 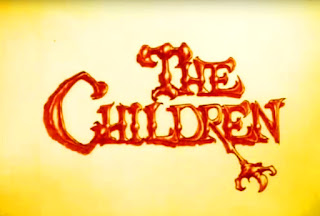 Kids! You never really know what they’ll do, especially when you fool yourself into thinking that you do. We can say we did our best, but there is no such thing as a perfect parent...so, what if our kids one day decided to take revenge on us for grievances both large and small, even for mistakes we didn't realize we made? And what if it could happen in an instant, before we even have time to react?

This is the nightmare scenario of 1980 independent regional freakout “The Children”, a grisly flick that gives us an epidemic of mutant children who are suddenly transformed into deadly, smiling monsters. They seem relatively normal at first, at least when we glimpse them briefly during a bus ride home from school. But then the bus they’re riding in passes through a cloud of noxious yellow gas, the result of a leakage at the local nuclear power plant. The bus is found abandoned on the side of the road, and it takes the townspeople far too long to realize that the children have been transformed into grinning, pallid zombies with black fingernails, now possessing the ability to fry a human being alive in a matter of seconds just by making contact with their hands. Just as contemporary counterpart “Friday the 13th” featured a mother’s maternal devotion as a motivation for hideous murders, “The Children” presents parental love for children as a source of unimaginable death.

Just slightly more outlandish than “Ft13th”, “The Children” depicts a small New England town called Ravensback that serves as an unlikely snapshot of the changing family dynamic.  Although on the surface they carry on as respectable people, the adults in the movie are incompetents who bring harm to children, usually without even knowing they are doing so. The first two men we see are workers at a nuclear power plant, and their recklessness is what causes the whole ordeal in the first place; without any respect for the enormous responsibility associated with maintaining a nuclear facility, they decide to cut short their service call and head for a local bar, allowing a malfunction to occur. A thick cloud of yellow gas results, engulfing the countryside until it drifts into the path of an oncoming school bus.  Our female lead, Cathy Freemont (Gale Garnett), is driving alongside the bus, and she too passes right through the toxic cloud, zooming ahead of the school bus.

This becomes important later in the story, when we learn that Cathy is pregnant and that the effects of the gas are only applicable to children, but it’s also indicative of the script’s underlying message: things that seem inconsequential to adults are likely to affect children for the worse, and the adults are oblivious. The five children who were on the school bus represent five local families. Cathy and her husband, John (Martin Shakar from “Saturday Night Fever”), have two other kids, early teen Jenny (Clara Evans) and younger Clarkie (Jessie Abrams). Clarkie avoids being turned into a zombie by staying home from school that day, but Jenny is one of the cursed five.  When Jenny and the other kids don’t come home, sheriff Billy Hart (Gil Rogers) responds to the growing concern about the missing children.

Hart visits the first of the affected families, Dr. Joyce Gould, who lives with her female partner Leslie Button (Suzanne Barnes) and Leslie’s young son, Tommy (Nathaneal Albright). Joyce is a caricature of a man-hating lesbian, berating the sheriff even as he does his best to figure out what is happening. She also keeps Leslie nice and stoned on codeine, and instead of Leslie, she is the one who goes to find out what happened to Tommy.  After parting ways with the sheriff, she is lured into the nearby cemetery when she catches a glimpse of Tommy. Joyce discovers the hideously charred corpse of what was once the school bus driver, and when Tommy suddenly emerges from behind a tombstone and Joyce sweeps him into a reassuring embrace, she is reduced to a smoldering pile of charred flesh and bones in a matter of seconds.  This, true believers, is the awesome power of…The Children!
Another family in Ravensback contains an alcoholic wife and her enabling husband, who are waiting on the return of their daughter, Ellen. She does come back home, fries her mother alive on the front porch, and then presumably does the same thing to her panicked father when she chases him into the house. A third couple are presented as self-obsessed snobs who couldn’t care less about the fact that their young daughter Janet is missing; the mother smokes pot by the pool while entertaining her effeminate pimp of a houseguest, and seems to think the idea of her daughter’s disappearance is “exciting”.  These people are all punished, of course, by being burned alive—their deaths occur offscreen, but the sheriff stumbles upon the scene later in the film and notices that they were making a dinner of lobsters, which of course involves boiling the creatures alive. Poetic justice has been served!
Even though John and Cathy Freemont are the protagonists in the film, they are just as flawed as the other parents in the town.  Not only does Cathy zoom right past a school bus in her car, but once the shit hits the fan in Ravensback, there’s a scene where she is too stressed out to resist smoking a cigarette, during which she speaks directly to her very pregnant belly and says “Sorry”.  John is cloddish to the extreme, even though he emerges as the machete-wielding hero.  For the life of me, I can’t explain why he discovers that the town is being victimized by murderous zombie children, yet refuses to tell his distressed wife that this is happening.
The family of the fifth zombie child, Paul, is headed by a stern farmer who seems like the type who could render a good whipping if he felt the need. There’s also an older sister who is confronted by the newly transformed Paul and doesn’t even notice that anything is wrong with him.  Instead, she starts to berate him for bothering her, which is a familiar behavior for big brothers and sisters everywhere.  Both she and the father end up roasted like the others.

Director Max Kalmanowicz racked up most of his IMDB credits in the sound department, and although he isn’t credited with this task in “The Children”, it’s interesting that the sound design is one of the most effective aspects of the movie. The action is bolstered by strange electronic blips and sighs, and I dare you to forget the weird sounds that the children make when they are vanquished—the only way to kill them is to cut off their hands, and when this happens, they emit a hair-raising animal howl as they die.

I already mentioned “Friday the 13th”, which was released to theaters almost simultaneously with “The Children”. The two films share a few things in common, most notably a score by Harry Manfredini.  There are a few cues in each film that sound identical. The two films also share Barry Abrams as the director of photography.

One of the most memorable elements of the movie is the fact that it depicts the death of kids, something that is still mostly taboo, or used for extreme dramatic impact.  “The Children”, however, gleefully presents this in as much detail as its budget allows, which adds to its unsavory atmosphere. The fact that the kids are zombies could have justified this in the minds of the filmmakers, but that doesn’t really change the fact that we see some rather extreme cases of the mutilation of children. A young boy’s hands are cut off on camera, a group of children are seen cowering in a barn while trying to avoid a man who intends to hack them to death with a machete, and there’s a scene where the man does just that very thing to a zombie girl who looks to be about age 9.  We also see a 6 year old boy being chased by a zombie child, and later his parents find his corpse in his bedroom…it’s worth noting that the filmmakers show a little restraint in the depiction of this dead little boy, sparing him the grotesque burned/boiled look of the adult corpses in the film.

The cheapness of “The Children” and its ridiculous premise, however, keep it from being taken seriously, which helps soften the blow of making a movie that contains violence perpetrated by and against kids.  Even though most of the action is played with a straight face, “The Children” contains enough broad humor that it’s clear the filmmakers were laughing with us. I’m sure a lot of viewers still saw this as reprehensible even when it came out in 1980, but here is also a movie that is somehow on the side of its villains. These monster children really are avenging angels who punish their families, friends and neighbors for crimes that include polluting their environment, disregarding their well being, and placing the needs of children secondary to their own selfish interests. 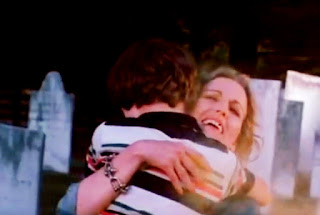 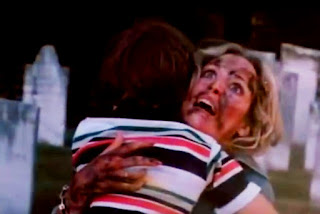 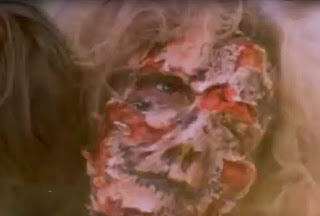 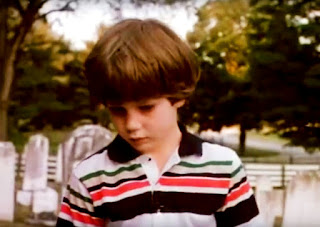 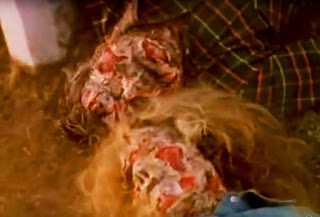 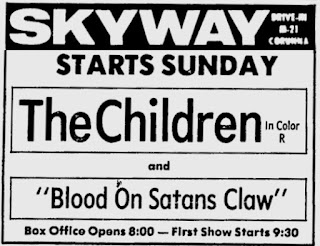 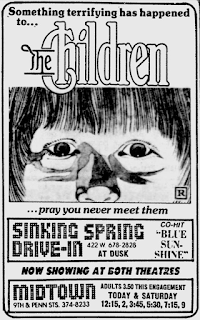 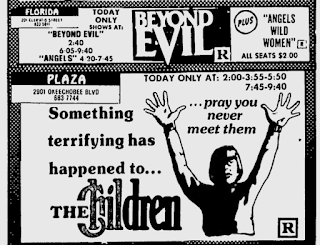 Posted by GroovyDoom at 5:17 PM

This is an extremely fun movie. Great job reviewing it as well. It's...low budget, yet everyone in the movie takes it damn serious really adds to the enjoyment factor. Memorable deaths, using kids as the killers, the commentary of society really just make this one a movie I've watched many times and always enjoy showing to someone who's not seen it yet. If I had to pair it with another movie...I'd show it after It's Alive.