"Halloween" is one of those inescapable cultural institutions that everyone knows about even if they've never seen it. A true surprise runaway box office hit, its success spawned a never-ending series of horror movies that inundated the 1980s in a sea of slashers, so much so that it's difficult to imagine there was ever a time before "Halloween". But I am old enough to have lived there, and I know some of you remember it, too. In 1978, there had already been a few movies in my memory that made people line up around the block to see them, and made our parents talk about them in hushed tones. "The Exorcist" was one of them, a movie that made so many people lose their shit, even when it was sanitized and broadcast on TV I was forbidden to watch it. "Jaws" was another, and I have distinct memories of that one, my aunt reading scary passages of the book to my mom, and both of them having to explain to me that sharks were real and they did eat people. I was already a rabid fan of "monster movies" at age 8, when "Halloween" began to gather a reputation as being a movie to scare the piss out of you. I saw scary trailers for it on TV, but it was really all the talk at school that made me anxious to see it. It was more than a movie, it was an event. I remember cutting ads out of the newspaper in hopes someone would get the hint, but my mom sure as hell wasn't gonna take me to see "Halloween"--she eventually did see it, and she was scared to death of it--and I didn't have anybody else over the age of 17 to take me to an R-rated movie.

Eventually HBO ran the movie and I got my chance. It was either October 1979 or 1980. My dad had HBO, so I made damn sure I had plans to stay at his house the weekend "Halloween" premiered. Even better, he and his wife were out for the night, leaving me and my six year old sister with two teenage girls as babysitters. Funny how that movie, showing on a 1970s TV set, could scare the hell out of us so bad. I didn't understand anything at the time about how John Carpenter made the film, I just remember all of us screaming. A lot. I was still young enough to only have a vague idea of how movies were made--for all I knew, movies were actual magic. Horror movies tweaked us so easily as kids because we were still at that place where fantasy and creativity went hand in hand, and we believed anything was possible. All it really took was some scary music, a villain, and an appealing protagonist, and any movie could be terrifying. "Halloween" had all of those things and more. 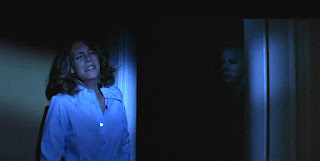 It's the "more" that keeps us talking about the movie today, decades after it was made. Carpenter's little independent movie, made for about $300,000, pushed all the right buttons without being cheap. Sure, anybody could make a movie where loud noises and sudden hands on shoulders startle the audience, and he does that enough in "Halloween". I remember Laurie bumping into Sheriff Brackett in broad daylight as being one of the biggest scares. But that's not the meat of the movie, it's just Carpenter toying with you. For every jump scare, there are also lengthy sequences where terror keeps building and building, and there's nothing cheap about the way it's photographed or presented to the audience. "Halloween" is sly, and it doesn't want to just startle you for the price of admission, it wants to scare the hell out of you.

The scenes where Laurie discovers the bodies of her friends are a series of agonizing frames where the director keeps us unsure of where the danger is. Laurie and The Shape (the geeky, insider way to refer to Michael Myers) are rarely in the same frame at the same time. There's one spooky moment where they are: Laurie stumbles out into the hallway in shock, and in a dark doorframe behind her, you see the deathly white mask slowly materialize out of pitch black, and he lunges at her with a knife. The shots are static, too; although there are a number of handheld camera pans elsewhere in the film, the chase scenes show frantic movement within stationary frames, and almost never with both characters in the same shot, so you never really know how close the killer is to catching up with Laurie. It's a subtle thing that creates a lot of tension. Without it, "Halloween" wouldn't be worth watching more than once, not after you already know when the killer will jump out at the victims. But even when you know it's coming, Carpenter's game is so enjoyable, you have to keep coming back to it.

The cinematography in "Halloween" has a lot to do with its artistry, too. The script itself isn't pretentious--even with the melodramatic speeches written for Donald Pleasance, their context in the movie isn't entirely serious--but the way the movie looks is high quality stuff for a low budget movie. More than one critic, either armchair or professional, has commented about how Carpenter's work here resembles Hitchcock. This fanboy, however, sees more influence from the Italians. The nighttime scenes are often bathed in ultra blue lights, and who could forget the startling murder where a young man winds up pinned to a door and left hanging there, stiffly upright? The overall composition is very reminiscent of a murder in Mario Bava's "Twitch of the Death Nerve", where a character is impaled to a wall by a spear. "Halloween" also recalls Bava in the breathtaking camera tricks that enhance the film rather than distract from it; the very first scene is a lengthy first-person camera tracking shot that seems to be unbroken (Carpenter has admitted it technically is not a single take, with a cut existing during the momentary screen blackout when the killer reaches out and dons a mask). I think people mention Hitchcock simply because "Halloween" is actually a good movie.

It's important to take "Halloween" on its own terms and not in association with the series that followed, especially the 1981 sequel. Don't get me wrong, I love "Halloween II". But the real power of "Halloween" comes from the idea that something evil comes after Laurie and her friends, for no reason at all, and without any explanation. There is no motivation for Michael Myers to escape from the sanitarium and commit a series of murders, it's just Laurie's unfortunate luck that he notices her. He's not her long-lost brother, out to finish a knife job on her because of who she is, he is simply the Boogey Man.

Something the sequels almost completely forgot was the killer's childlike playfulness, which made him even more scary. He was a psycho stalking people with a butcher knife, and yet he took the time to wear a sheet like a ghost and put Bob's glasses over it, toying with Lynda before strangling her. At any moment he could have just barged in there with a knife and finished her off, but he wanted to play with her first. It's also hard not to see the parallel between a Halloween haunted walk-through attraction and the weird tableau he creates with the bodies, drawing in poor Laurie as the unwitting patron in his haunted house. Carpenter makes an interesting and subtle reference to Michael's bizarre childishness earlier in the film when he shows the two kids Tommy and Lindsey alone watching a horror movie, and Tommy hides behind a curtain to scare Lindsey. This is the same mindset Michael Myers is coming from, except his pranks result in murder.

Finally, I'm posting a link to this brief clip, which is a great example of why I love horror movies and shows what I was talking about with "Halloween" being an event rather than just a movie. It's actual audio from a 1979 screening of the movie that someone captured with a hand held cassette recorder. The person synced it as best he could with the corresponding clip from the film, and it's good enough to demonstrate the experience of seeing it when it was fresh and the shocks were still new, accompanied by an audience full of screaming people. 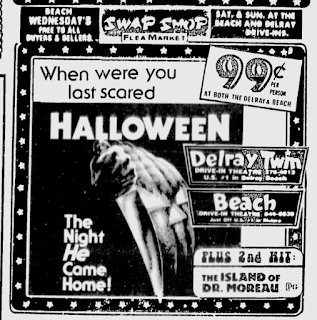 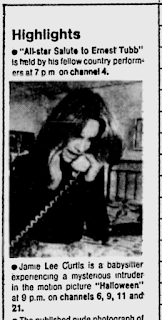 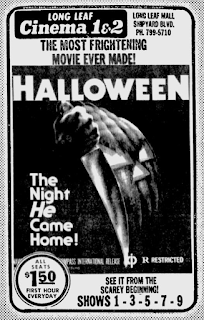 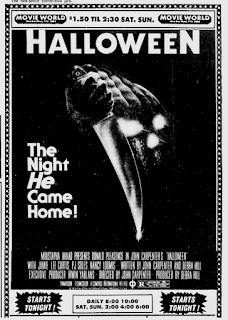 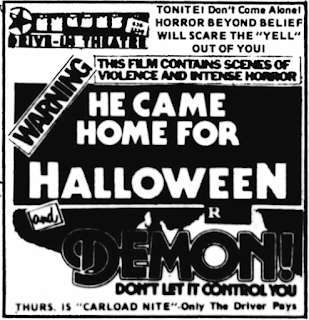 Posted by GroovyDoom at 1:33 AM

Thank you so much for the link to Halloween's original audience.

That scream gave me chills for all kinds of reasons you would understand.--