How to Make a Monster: AIP's Gay Teenage Terror

American International Pictures is a name well known to geeks like me who love films from the 50s to the 70s, particularly low budget exploitation pictures.  Helmed by a sales manager and a lawyer, James H. Nicholson and Samuel Z. Arkoff, the company also employed Roger Corman, notorious film producer known for his cheap production values.  It was Arkoff who was savvy enough to devise a formula where he created films targeting males in their late teens, and the company made a lot of money off of horror and sci-fi films.  People are always reading subtexts into horror films, like when people talk about "Invasion of the Body Snatchers" and say "That was really about McCarthyism, man!"  I think "Invasion of the Body Snatchers" is really about alien pods that duplicate people, but the subtext of not being able to trust people is a powerful one, lending the movie its ominous weight.

The AIP horror movies echoed some of the same sentiments, but there was a new plot device in the form of hypnosis.  Just like "radiation" had the potential to turn ordinary insects into lumbering giant predators, hypnosis had the power to turn ordinary people into murderous monsters, and it was being used by villains with dubious intentions.  "The She-Creature" featured a man who used hypnosis to cause a woman to "regress" to a point where she became a prehistoric monster--somehow this powerful hypnotic trance caused even her body to transform.  Hey, it was a reason to have a monster in a movie, right? 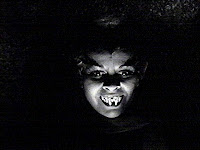 But if hypnosis was the tool used by the villains of the films, same-sex relationships were the terror that lent weight to the movies' supernatural monsters. AIP had also figured out its marketing scheme by now, and it paid off with the big 1957 hit "I Was A Teenage Werewolf". Along with this new teen formula, the scriptwriters had introduced a distinct homoerotic undercurrent, suggested by the doctor who preys on Michael Landon's teenage character and turns him into a werewolf without his knowledge.  "I Was a Teenage Frankenstein" was also released in 1957 and featured an older male doctor who created a body out of spare parts--a body that just happened to stitch together into the form of a hunky young man. Reminding us that his hands have been all over that body, the scientist famously tells the creature "Speak! You've got a civil tongue in your head, I ought to know, I sewed it there myself!"

On a double bill with the AIP "Frankenstein" film was "Blood of Dracula", where the gay suspicion was turned way up.  Although the film's creature is conceived as a vampire, it was still a werewolf-style transformation into a mute, hissing creature.  It takes place in an all-girl prep school, where maladjusted new arrival Nancy is immediately set upon by a predatory female science teacher who just happens to be dedicated to turning people into monsters via hypnosis.  Using an amulet she acquired in Transylvania (AHA!), she somehow turns our heroine into a vicious vampire with rat fangs for nighttime tantrums of murder and bloodsucking.  Her purpose?  To counter the development of the atom bomb by proving that the human mind is the greatest weapon.  Because, ya know, that makes a hell of a lot of sense, right?  There are a lot of unspoken motives for all of this, particularly the undeniable erotic tension between the science teacher and another one of her pupils, a young girl who blatantly helps lure Nancy into her predicament. 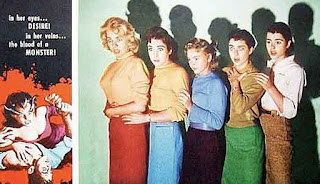 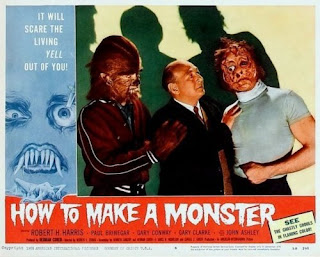 1958's "How to Make a Monster" followed up "I Was A Teenage Werewolf" and "I Was A Teenage Frankenstein", but introduced a self-referential format that was decades ahead of Kevin Williamson and Wes Craven.  The script of "How to Make a Monster" actually takes place in the studios of American International, where a sequel is in production that pairs the Teenage Werewolf with the Teenage Frankenstein. Spoiling the fun is a pair of new studio bosses who make the decision to abandon horror and concentrate on beach party movies and musicals.  They give a bunch of people the pink slip, including an aging monster-makeup artist who decides not to take it lying down.  Together with his simple minded (and obviously bottom-bunk) assistant, he uses the hunky teenage stars of the Werewolf/Frankenstein movie as his stooges in a series of revenge murders.  First he lures the boys into his makeup chair, where he applies special makeup that makes them open to hypnotic suggestion.  Then he instructs them to kill his enemies.  This makeup concoction is particularly mysterious, since it apparently causes a transformation all on its own, even without the hypnosis: the makeup man puts it on himself and transforms into a Mr. Hyde type monster that kills a nosy security guard.  The climax of the film finds him luring the boys back to his house, where he gives them alcohol and attempts to talk them into allowing him to..."put the makeup on" (wink wink)...one more time. The boys, however, start to remember the strange circumstances of their hypnotic trances, and the jig is up when the house catches fire.

I think it's pretty obvious these films were lightweight nonsense, but these "teenage" horror movies had dark underpinnings of strange, intimate same-sex relationships.  "How to Make a Monster" and "Blood of Dracula" in particular painted their evildoers as sexual predators, with a lesbian teacher and a dirty old makeup man as their real villains.  We know that this is the attitude that many people have about homosexuals themselves, even moreso in the 1950s when it was "the love that dare not speak its name". The actual "monsters" in these films were really victims, youths transformed into aberrations against their own wills or without their knowledge.  Once they allowed themselves to be placed in a suggestible situation with these older predators, their lives were forever changed without them even realizing it.  Usually they wound up dead at the conclusion, or in the case of "How to Make a Monster", carted off by police to pay for crimes they didn't even know they committed. 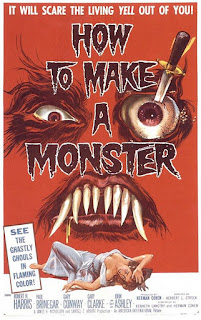 Thank you! I was just watching How to Make a Monster and wondering if I was the only person to notice this about these films.

in how to make a monster, i could think of more delicious things to do with those hunky looking teens than make them kill. never have two boys seemed so eager to give themselves over to the influence of a more mature gentleman.

why do these mad scientist never think of better things to do with these studs than mind fuck them?