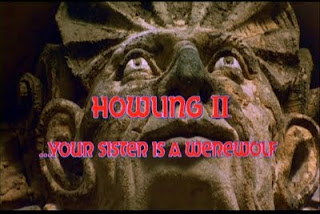 There have been some pretty crappy "Part 2" movies in the history of sequeldom. "Exorcist II - The Heretic". "Poltergeist II". "Jaws 2". "Piranha 2: The Spawning". "Troll 2"...well OK, was "Troll" really all that great? My own personal favorite Terrible 2 is "Howling II". The appropriate subtitle of the movie depends on where you lived when the movie was released. It was known in various places as "Howling II: Your Sister Is A Werewolf", "Howling II: Stirba, Werewolf Bitch", and "Howling II: It's Not Over Yet". No matter where you lived, however, "Howling II" was definitely known as a rotten, stinking crapfest of a movie.

The first time I saw it was when I rented the big clunky VHS from our local mom & pop video rental store (except I think it was actually a mom & mom outfit). I took it home, watched it, and couldn't f'ing believe that this...this...thing...was the sequel to "The Howling". I mean, the original was one of the most totally awesome werewolf movies in the history of anything, and it was always my opinion that it was a thousand times better than "An American Werewolf In London". So why was the sequel like some sadistic movie producer's revenge on an unsuspecting moviegoing public? I do my best to love bad movies, though, so I ordered me up some "Howling II" on DVD via Netfux. Well ya know what? It's still a bad movie. But now that I am a few decades past my initial disappointment, it's a bad movie that I can really dig.

Serious props must be given to those without whom this movie would not be digable at all. I'm talking, of course, about Christopher Lee, Sybil Danning, and Sybil Danning's boobs. If I had been into chicks, I would have never cared that "Howling II" sucked, because it has Sybil Danning in it and she wears a rip-away bra in the movie. She also has some of the most outrageous costumes this side of She-Ra. And even though I'm not into boobs, I am not blind, and I know when a woman has nice boobs, and Sybil Danning's got em. At least, she did when this movie was made. The producers of the movie knew it, too, because they take a scene where she rips off her bra and they repeat it about 25 times over the end credits. No, really. They do.
The genius producers of the film also knew not everyone is into boobs, so they got Christopher Lee to be in their stupid movie. It's amazing that he agreed to do this, but there he is. As a reward, the director lets Chris wear a far out pair of wraparound sunglasses while spying on a group of werewolves in a "punk" club. You'd think Christopher Lee would stand out, seeing as he's a 60-something gray haired man in a middle of a club where the average age is 25 and everyone has hair that looks like it was run over by a lawnmower, but the shades really lend an element of disguise to his getup.


The film's story involves the brother of Karen White, Dee Wallace's character from the original movie. At Karen's funeral, Christopher Lee shows up and tells brother Ben that his sister is a werewolf. After much protest, Ben realizes that Chris is 200% correct, and with his TV-news reporter girlfriend in tow, he joins Chris on a trip to Transylvania to do battle with Stirba, queen of the werewolves. Sybil Danning plays Stirba, who has got to have a damned good Transylvanian hairdresser tucked away in her castle somewhere. Early on in the film, she has a menage-a-trois with two other werewolves, and here is where we first discover the movie's biggest problem: it doesn't know what a werewolf is. "Howling II" believes that if you sprout hair all over your body and put on a Planet of the Apes mask, then you're a werewolf, and it proceeds full speed ahead with this concept. Of course "The Howling" had KICK ASS werewolves, so right away we see a big problem with this sequel. Obviously the filmmakers knew this, because they have their werewolves do things like roll around in bed snapping at each other and clawing one another. 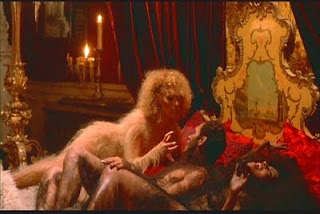 
The 'good guys', with Chris Lee and the other two imbeciles on their side, gather in the village and then set out to raid Stirba's castle, while Stirba calls a meeting of werewolves. At first she indulges them in an orgy, then sends them off to do battle against Chris Lee and his four other warriors, who are armed with titanium bullets. You'd think that 30 werewolves wouldn't have any trouble taking out five human beings walking through a dark forest, but these damn wolves don't have all their dogs barking. They just lurk in the bushes a lot, then lunge at the people one at a time. With that kind of an army backing her up, Stirba might as well have walked down into town waving a white flag. But lo and behold, we find out that Stirba and Chris Lee's character are actually brother and sister, and Stirba wants him to become her lover. If she had succeeded in seducing her brother, she would have smashed the taboos of bestiality AND incest in one fell swoop, but instead she gets stabbed in the heart. All that, and all he had to do was walk up to her and stab her? We don't know how she ever got to be Queen of the Werewolves, unless she lucked into it when her predecessor died of heartworm.

"Howling II" is one of those bad movies you just kinda have to see to understand. I can't imagine anybody thinking it's a "good" movie, but I doubt you'll realize just how weird and strange things can get in a "part two" sequel before you see Sybil Danning rip her bra off nineteen times in a row. 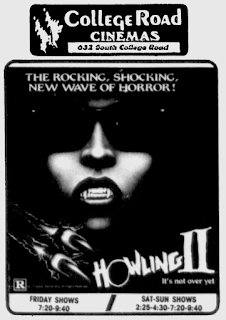