The holidays are a marketing scheme, plain and simple. The campaigns all make it sound like they're selling peace, love and togetherness, but it's really just an attempt to lull you into a state of suggestibility so they can sell you products. Besides, this "togetherness" can involve the people who are most likely to push our buttons in the worst way - our families. If you feel anxiety about what your family is likely to do or say when you visit for the holidays, here's a list of 10 movies - with plot spoilers, so be warned -  that will make you feel a whole lot better about whatever problems your own clan may have. 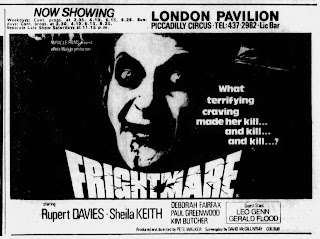 The family in Pete Walker's "Frightmare" is one of the examples that immediately comes to mind when I think of the phrase "totally fucked up". Let's start with their biggest issue: mother is a cannibal. Father was her reluctant accomplice and lacks the ability to stand up to his wife's aberrant behavior, and he was imprisoned alongside her (apparently they have double occupancy cells in English prisons for married couples). 15 years later, they're both declared "sane", and they return to their small rural village, where mom immediately starts reading Tarot cards and eating her customers again. The two daughters in the family are mirror images of both parents - the older daughter, Jackie, has been raising 15-year-old sister Debbie and has emulated her father's tendencies to make life easier for the troublemakers in the family. Debbie, on the other hand, takes after her mother and delights in committing acts of violence. The lying, excuse-making and manipulation reach epic proportions in the film's climax, where the now-murderous Debbie joins her mother in killing anyone who knows their secret, including Jackie. She also manages to successfully turn the father against Jackie with just one lie, ensuring that he blocks her escape and refuses to intervene when they advance on her with blades. And you thought YOUR family was messed up! 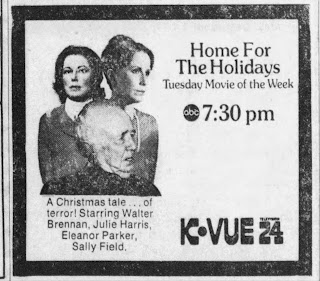 Murders are a sure fire way to ruin any holiday gathering, or at least a close second to arguing about religion or politics.  That's what happens to the family in this movie, one of them is a cold blooded killer, and the rest of the clan is unsuspecting. Eventually it's Sally Field on the run from the killer, who turns out to be one of her sisters disguised in a yellow rain slicker. Her motives for the murders? Plain old sibling rivalry. And nothing says "Christmas" like that. 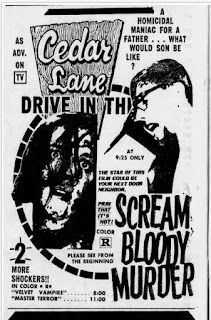 Another case of deceit being the undoing of traumatized survivors, Robert J. Emery's 1972 film (originally known as "Scream Bloody Murder" until another movie came along at the same time with the same title) features another pair of siblings with a murder in their past, and murder in their immediate future, too. After young Karl witnesses his father killing his mother with a fire poker, his sister Anna raises him alone in the family's big old spooky house. Now a young adult, the neuroses that Karl carries with him (a pathological fear of cats and an unhealthy obsession with mannequins for starters) begin to come to the forefront. The audience comes to understand Anna's complicity in Karl's mental illness, keeping him dependent on her by encouraging his emotional immaturity, because she fears that Karl is always on the verge of remembering a key piece of information that he witnessed - Anna herself helped their father hide the body after the murder. Karl's sanity finally breaks and he kills Anna and her new lover, then takes his own life by slashing his wrists and leaping from a bridge into a canal, where he is eaten by sharks. 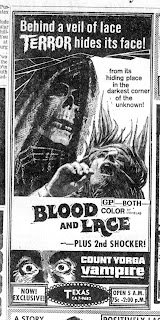 After someone bludgeons her prostitute mother and a john to death with a hammer, a young teenage girl is sent to live in a state-funded orphanage. She also seems to be pursued by the killer, a man with a burned face wielding a hammer, but we later learn that she is in fact the murderer, and the weirdo pursuing her is actually the detective who has been investigating her mother's case. The reason? Unbeknownst to her, he is her long-estranged father, who has been using his knowledge of the murders to blackmail her into marrying him and having his children. Yes. The bulk of the movie is spent dealing with her misadventures in the orphanage, which is run by a funcationally insane woman and her skeezy handyman helper. They abuse and torture the children whenever they step out of line, and if the kids happen to die from the abuse, they keep the bodies in the freezer, taking them out and putting them in bed whenever the state social worker arrives to check on the facility. The bizarre family dynamics of our teenage heroine are mostly just a bracket to this action, but they're pretty hard to forget. It's still amazing to me that a movie like this could be rated PG, but there ya go. 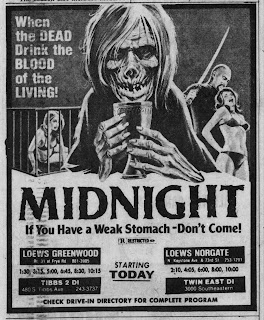 What the hell is going on in rural Pennsylvania? Well, Satanism for one, and that's not even the worst of it.  A young girl escapes her sexually abusive stepfather, who tries to rape her and is knocked unconscious. When he wakes up, she's flown the coop, so he tells his wife a bullshit story about what a bad girl she is. Did I mention he's a police officer? The teenage runaway and her two new friends she met while hitchhiking decide to rob a grocery store, and when they hide out in the woods, a family of deranged hicks who worship the devil kill her friends and take her prisoner while she awaits human sacrifice. This backwoods family keeps their mother's rotting corpse in a chair a'la Norman Bates, only they apparently never learned taxidermy. Our teen heroine ends up escaping her doom, with some help from her pervy stepfather who tracks her down - probably because he's afraid she'll tell someone what a creep he is. He ends up fatally stabbed but takes a couple with him for the team, ensuring that he'll only be sent to a less tortuous level of burning hell. 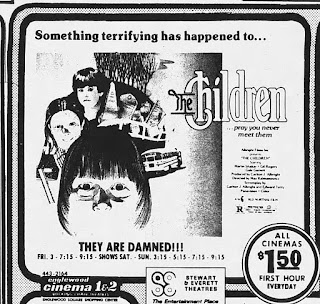 There isn't a healthy family in this entire movie. When a small busload of children passes through a radioactive cloud, the kids are transformed into murderous atomic zombies who microwave their loved ones alive with their hands. After each death scene, we start to realize that this is something closer to revenge on their part, because this seemingly idyllic rural town is populated by citizens who don't seem to know how to do the right thing, especially when it comes to their kids. Alcoholic wretches, pill poppers, disco bodybuilding swingers, women who smoke while pregnant and speed past school busses - the town of Ravensback has got them all. Even the blissfully daffy old general store owner admits that her husband, who drives the school bus, has the potential to abscond with the kids, even if it's just for an impromptu picnic. Maybe it's a good thing that he ended up looking like an overcooked pot roast. 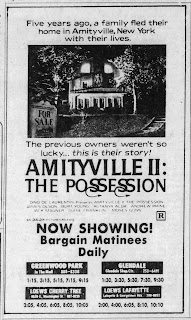 Incest, domestic violence, mental and verbal abuse - the family in this movie has it all, including a fabulous house on Long Island with these quaint little attic windows. The fact that these issues seemed to exist *before* they moved in makes the demonic influence sort of a moot point, at least if you think about it. My advice is, don't think about it, just roll with it - this is the best in the series, if you ask me. 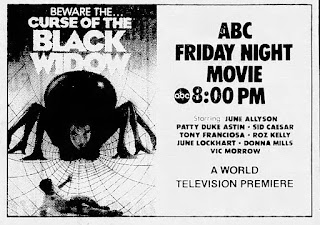 Dan Curtis gave us this made-for-TV monster movie about a woman who turns into a giant spider during the cycle of the full moon. She's one of a pair of twins, and the murderous transformations turn out to be linked to the jealousy she feels toward her twin sister, who is *not* a spider woman and has no idea what is going on. She only knows that every man she has ever so much as glanced at seems to wind up dead with large holes full of spider venom in his chest. But wait, there's more. As the film reaches its climax, the non-arachnid sister discovers that their mother, presumed dead years prior, is actually alive and living in a state of dementia in the attic of the family mansion, deepening the implicit betrayal committed by those who are aware of this trans-species family phenomenon. Can you imagine mourning the loss of a family member and then finding out years after the fact that she's been alive the whole time? True to the title, this curse is passed on from generation to generation, as the young daughter of the spider woman is revealed to have the same hourglass birthmark on her abdomen, indicating that somewhere in there she's got eight legs just itchin' to come out.

Speaking of family members locked away in the attic, this movie has a real doozy. A mad stabber terrorizing a spooky college boarding house turns out to be a lobotomized woman who has been kept hidden in a secret attic bedroom for years after she became pregnant out of wedlock and attempted suicide. The family's attempt to earn some extra cash by renting rooms out to college students ends up being a very bad idea indeed. But she's not the only victim of these family secrets - the illegitimate son she bore is now a young man, and he believes that his grandparents are actually his parents. Confirming that murder runs in the family, he responds with deadly gunfire when he learns the truth. 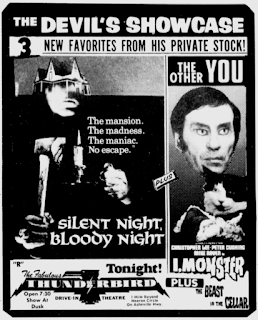 What a creepy film this is. There are a few stylistic and thematic similarities to the later "Black Christmas", but "Silent Night, Bloody Night" isn't quite as polished and straightforward, and I love it for that reason. It features a convoluted plot that may be difficult to follow on first watch. Mary Woronov has the worst Christmas ever when she discovers that her dad is actually one of several dangerously disturbed mental patients who, decades prior, escaped an asylum that used to be housed in the local spooky mansion (now abandoned).  But that seems like nothing compared to the family problems of the asylum's former proprietor, who apparently turned his house into a mental hospital just so he could have his daughter committed there - after he raped her and she bore his child. If he'd do all that, then it should come as no surprise that he would fake his death, live the rest of his life as a patient in a local asylum, then escape in order to carry out a deadly plan of revenge involving murders commited by ax, blunt objects, shovels, and any other thing that happens to be lying around. It isn't quite as stalk-and-slash as it may sound, but the morbid atmosphere meshes beautifully with the Christmas elements.

Posted by GroovyDoom at 6:40 PM