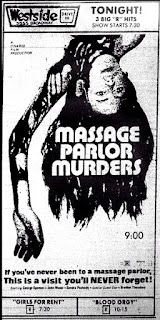 All the amateurishness aside, if you judge this on sheer entertainment value, this movie really delivers. The ultra 70s decor alone could have made this a must-see - this is definitely a Furniture Movie for me - but you also get some magical footage of New York City in the early 70s, with some particularly lingering shots of 42nd Street grindhouses. The scenery looks even better due to the incredible transfer Vinegar Syndrome did with this film. 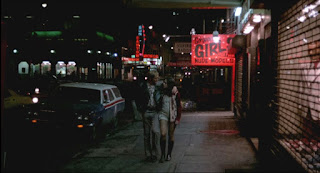 There's not much of a script, but the movie does have the right idea in certain regards, such as the depiction of two police detectives who both have sleazy secrets in their own lives. Rizotti (George Spencer) sleeps with prostitutes (sorry, "massage girls") while on duty, then goes home for long evenings of ignoring his wife, whose bids for his attention have turned into epic tirades of nagging and bitching. She's like the sister of Beverly Hills from "Invasion of the Bee Girls", or at least a client of the same beauty salon. Rizotti's partner, O'Mara (John Moser) is sincere but inept; while staking out a nude club (and doing as the Romans do while in Rome himself), he decides to chase a suspect on foot, commandeering a civilian taxi while wearing nothing but a short towel he managed to grab on the way out. He then endangers countless citizens of New York by instigating a high speed car chase that devolves into a demolition derby, only to corner the suspect and somehow apprehend him - still barefoot and wearing nothing but a towel. Those naked super hero hijinks aside, this cop is so short-sighted that he knows someone is murdering massage girls, yet doesn't even give his girlfriend any protection when she goes to her job...as a massage girl. Later, Rizotti and O'Mara both know the killer is about to strike, but still decide to get something to eat and have a few drinks first. When they arrive too late and miss all the action of the movie's staggering grand finale, they discover that the final would-be victim didn't need any help from them, thank you. (I hope she got to keep that money, she sure earned it.)

OK names, names - Brother Theodore has a brief scene in this, where he gets to recite some of his monologues. Fans will recognize them immediately from his recordings and appearances on The David Letterman Show. He plays a kooky astrologer and possible suspect who gets slapped around by our two fine examples of the NYPD. They also kick the shit out of George Dzundza, who doubles as the Assistant Director of this movie. Maybe he directed his own physical assault? Look fast for Beverly Bonner from "Basket Case" in a brief scene as one of the massage girls who (luckily) doesn't get singled out by the murdering creep. The only female character the movie allows us to get to know at all is played by none other than Sandra Peabody from "Last House on the Left". 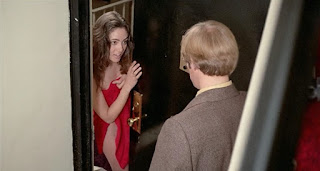 The violence is hardly realistic in the way a movie like "Last House" might be, but "Massage Parlor Murders" still manages a few visceral surprises. When it's time for the film to reveal the fate of a character we've become at least reasonably invested in, it does so in a shockingly rote manner, a cold and clinical view of a bloody crime scene. The on-screen carnage is often reaching for a little more than the movie's special effects can deliver. A scene where a victim is dispatched with a shattered glass object doesn't look particularly convincing, yet also manages to make you squirm just a little. Most of the lovely female corpses blink, so nobody would ever accuse this movie of being a snuff film. You may be more shocked by how far over the top and out into left field "Massage Parlor Murders" is willing to go in the non-sexual and non-violent scenes, like when we see a large group of naked strangers in a co-ed bath house cavorting in a giant Olympic-sized pool full of balloons, or a kinky voyeurism scene where a chubby guy in a leotard dances a crude form of ballet with a topless woman to "In the Hall of the Mountain King". 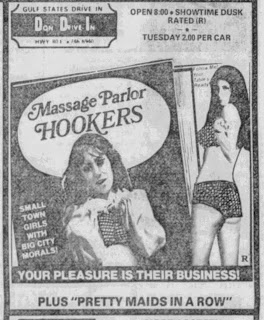 The film received a reissue with an alternate cut entitled "Massage Parlor Hookers", with an obvious refocus on the hooking parts of the movie as opposed to the murdering parts. That's exploitation, baby.
Posted by GroovyDoom at 2:20 PM