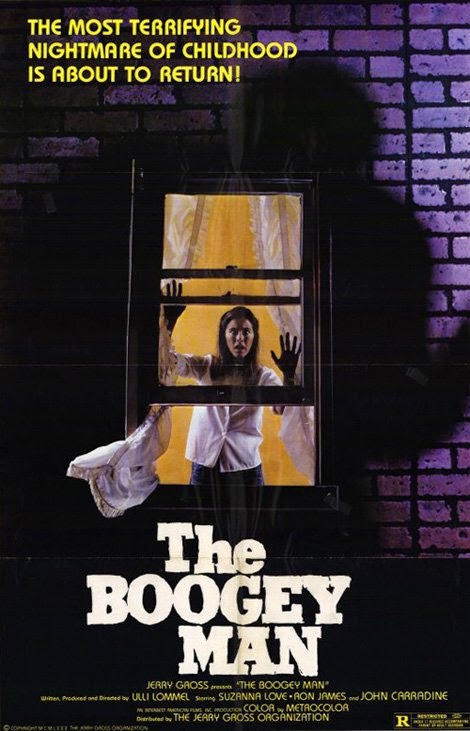 In late 1980 came a piece of low-low-budget filmmaking called "The Boogey Man", directed by German director Ulli Lommel. Although technically the story bears only passing resemblance to John Carpenter's "Halloween", the ominous TV spots and trailers teased the film as being related to "Halloween" without ever really saying so, picking out the moments in the film that matched Carpenter's film visually and thematically (a child's hand wielding a kitchen knife, an ordinary looking house lit in a spooky nighttime blue, a young female protagonist being chased and pounding on the front door of a house to be let in) and repeatedly intoning "The Boogey Man!". The tag line also suggests that The Boogey Man has "returned", as if the movie is a continuation of something we're already familiar with.

A'la Rob Zombie, Lommel liked to make films featuring his wife, and "The Boogey Man" gives Suzanna Love a starring role. She plays Lacey, the primary chica-in-trouble who finds herself victimized by what appears to be a very pissed off Invisible Man. In the film's opening sequence, two young children (Lacey and her brother Willy) are traumatized when their mother allows her creepy boyfriend to tie Willy to the bed and torture him after the kids are busted peeking at them through a window. You know, while the couple is being all sexy together (and stuff). Their slutting around involves the boyfriend wearing a stocking over his head, making him extra creepy. Lacey goes and gets a large kitchen knife to cut the ropes binding her brother to the bed, and Willy uses the knife to stab the creepy boyfriend to death. Lacey witnesses the act in a mirror in their mother's bedroom.

Flash forward many years to when Lacey and Willy are adults living with their aunt and uncle on a farm. Lacey is now married to a slightly dim bulb named Jake, who decides that the thing to cure Lacey's persistent nightmares is to take her to the house where the murder took place years ago. When they get there, they discover that the current owners have it for sale, so they pretend they're house shopping in order to get a good look around. Despite the fact that the house has supposedly just gone on the market, the homeowners have gone out of town and left their teenage daughters and preteen son in charge of showing strangers around their home. Not exactly parents of the year, are they?

Lacey goes all mental when she enters the room where the murder happened. The mirror is still there, hanging on the wall in the exact location her mother had it, and Lacey sees the image of the creepy boyfriend lying on the bed looking at her. Despite the fact that she's in a stranger's home, she picks up a chair and smashes the mirror to pieces, causing everyone to come running. Her husband does the sensible thing, which is to pick up every single tiny shard of the mirror, put it in a bag, and bring it back to the aunt and uncle's farm, where he painstakingly reassembles it. Well OK actually that is not the sensible thing, nor is it what a normal person would do in a situation like that, but if it were not so, then there would be no movie. The broken mirror has released the murderous spirit of the dead lover, who is free to cause murder and mayhem anywhere a shard of the mirror exists. But uh oh, remember that teenage sister and her little brother back at the original house? A small forgotten mirror shard that Jake left behind begins to glow with a red light, and a telekinetic force animates a pair of scissors to slash the teenage girls to death and crush their little brother to death in a window. The Boogey Man is loose!

Yes, "The Boogey Man" is about an invisible killer causing harmful things to float through the air and go after the human beings in the movie. The fact that the Boogey Man is invisible never really seems to deter the script from trying for some elaborate set pieces, with no real villain to focus on. Each attack scene features an ominous heart beating and Michael Myers-style breathing, usually over a point-of-view shot. Other times we just see levitating objects, like knives and pitchforks, ready to stab somebody real good. The convenient placement of broken mirror shards allows the Boogey Man to do his thing, such as when Lacey takes her young son fishing and he unknowingly has a piece of the mirror stuck to the bottom of his shoe. The mirror reflects light across the lake to where two couples are having a beachfront weenie roast, and the Boogey Man stabs a guy through the back of the head. Or rather, a knife floats into the back of a guy's head while he's sitting in his car. In a moment of true inspiration, his girlfriend leans into the car, not realizing he's dead, and when she leans in for a kiss, she's invisibly shoved onto the knife blade too, which is now sticking out of his mouth. Unfortunately for the Boogey Man, the other couple leaves because they think their friends are sitting in the car making out.

There's also some riffing on "The Amityville Horror", as Lacey's farm house home happens to have those weird Amityville attic windows that look like eyes, and there's also a Rod Steiger lookalike priest who tries to exorcise The Boogey Man with a big crucifix. John Carradine also makes an appearance as Lacey's shrink, confirming my lifelong suspicion that actors need money just like the rest of us. The whole thing is accompanied by a shrill, squelchy synth soundtrack that is reminiscent of John Carpenter's score to "Halloween III" (which actually came later than this). It makes the spooky atmosphere especially cheesy, but that's not really a bad thing in this movie. "The Boogey Man" is ultra low budget and sketchy, but it's an interesting idea for an exploitation flick.

It also made a lot of money. The movie cost an estimated $300,000 to make, and it grossed 4.5 million in the USA alone, with a worldwide take of about $35,000,000. Surely its status as a legendary banned Video Nasty in the UK only made people want to see the film more, and the lucrative business it did ensured that there would be a sequel. 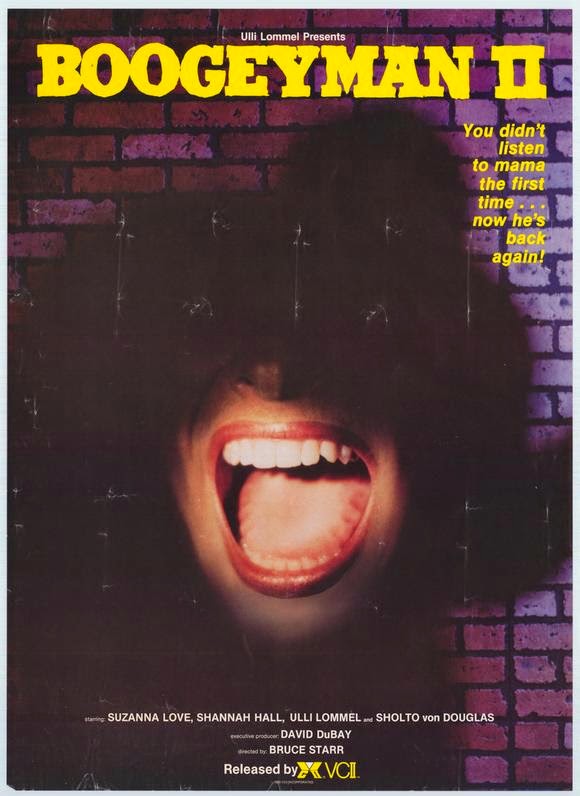 "Boogeyman II", aka "Revenge of the Boogey Man", was filmed in 1981 but not released until 1983, and where the original film got away with some crazy shit, this sequel sinks faster than if they'd tied a cinderblock to its ankles and dumped it in the ocean. According to IMDB, Paramount was interested in making this sequel, but instead Ulli Lommel decided to film it independently at his own house. Suzanna Love plays Lacey again, because ya know, she's married to Ulli Lommel, and there's also a second writer/director in Bruce Pearn (aka Bruce Starr). Ulli Lommel himself co-stars in "Boogeyman II" as a sleazy Hollywood type who wants to make a movie about Lacey's experiences in the first film. How Lacey got hooked up with a sleazy Hollywood type in the first place isn't exactly clear, but the main concept is that she's visiting Hollywood to discuss the details of her paranormal slasher experiences.

What I was not prepared for was the fact that almost two thirds of the running time of "Boogeyman II" consists of flashback footage to "The Boogey Man." And when I say two thirds, I really mean two thirds. It's possible that I nodded off into a hypnotic stupor, but I am pretty sure there was only about half an hour of original material in "Boogeyman II", and the rest of it was lengthy passages from the first film, so much so that you probably don't even have to watch the first film, you'd be better off watching "Boogeyman II" and then you'd get your double megadose of The Boogey Man all at once. Once the flashback footage is out of the way, there are some extraneous sleazy Hollywood types who are all are murdered by common objects floating through the air as if wielded by an invisible maniac. One death scene that got points at least for being ambitious is a set piece that takes place in a closed garage, where a man and woman are sitting in a car parked inside the garage. The man is killed when he hears a noise and stands up, his head and shoulders outside the open sun roof. He is yanked through the opening screaming, and the woman just sort of watches it and seems annoyed, then gets out of the car and starts calling for him inside the garage. While she's bent down looking for him under the car (?), a telekinetically-controlled ladder slaps her on the butt and knocks her forward so that her mouth is right on the tailpipe of the car. Death is instantaneous. Also make sure you don't miss the death by electric toothbrush and shaving cream.

While it's nothing great, "The Boogey Man" is a notable drive-in exploitation flick and it has enough style and atmosphere that I would recommend it to anybody who's a fan of low budget horror films. There are a few gory shocks, including a character who is found impaled through the neck and pinned to the wall by a pitchfork. You know, something that we could KIND of relate to if we have a morbid imagination. "Boogeyman II" seems like an SCTV spoof with lengthy flashback scenes padding it out and halfheartedly tedious attempts at something original, and is only recommended if you have insomnia. Or possibly a shaving cream death wish. 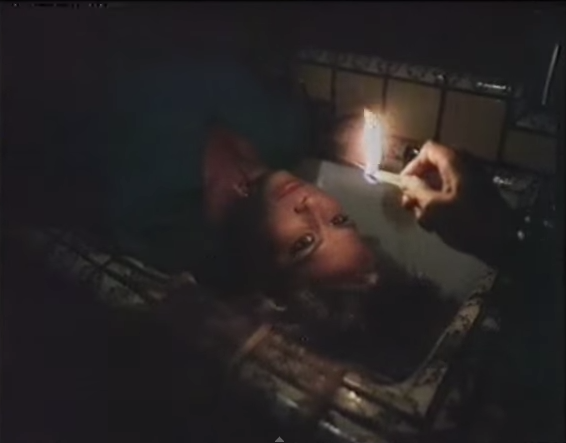 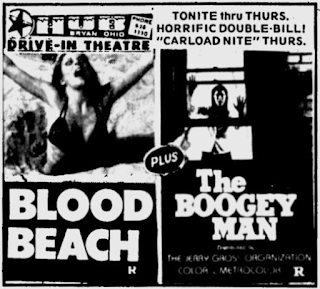 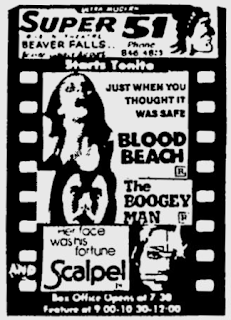 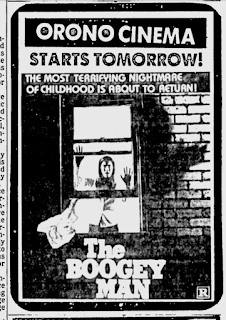 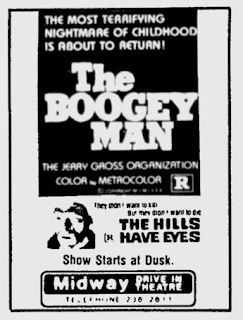 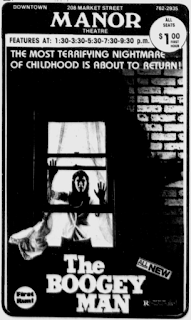 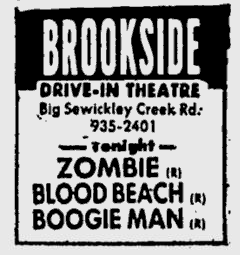 Posted by GroovyDoom at 6:59 PM