Superstition (1982): The meanest witch you ever did see. 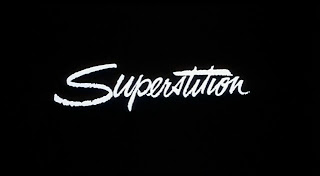 Today's groovetastic flick is a killer witch movie called "Superstition", a word that gives us almost the right letters to make the word "Suspiria" if you re-arrange them and throw the extra ones away.  "Suspiria" is a movie the makers of "Superstition" have definitely seen, as well as "The Amityville Horror," "Friday the 13th," and "The Shining." There may be a few I missed. Imitation is the most sincere form of exploitation in filmmaking, right?

The witch in "Superstition" is Elondra Sharack, but she's so damn wicked, I wouldn't be surprised if her maiden name is Markos. In fact, she's such a prolific serial killer that she makes Helena Markos look like nothing more than a spooky old lady with a bad temper. Late in the movie, we learn she was executed by the proverbial pious churchgoers after being accused of witchcraft by a little girl named Mary. Turns out Mary was damn right, as Elondra herself demonstrates the classic Linda Blair signs of demonic possession (whoops, there's another movie the makers of "Superstition" have seen!). Alas, even though she has the power to make her face distort like the transformation scenes in "The Howling" (there goes that Xerox machine again), it's not enough to save her from being executed by drowning in a small pond. For centuries after, she wreaks a localized--but extremely violent--form of revenge on anybody who happens into the area of the small pond, which is bad news for residents of the various houses that have been built there over the years.
Something that makes "Superstition" a little different than other cheaply made derivative horror films is its efficiency. It doesn't bother with a lot of buildup, it just wants to start killing people, which it totally does. The cursed pond now has a large vacant mansion standing next to it, which is the scene of a double murder (Suspiri-errrrrr, yeah) when two teenage pranksters scare away a necking couple in a parked car, only to be microwaved and filleted by the witch. Yes...there is a death by microwave right in the beginning. You just KNOW it's going to be good when that happens. Never mind why a modern appliance like a microwave would be in a mansion that was supposed to have been deserted since the 1950s.
The house is on property owned by the church, and Inspector Sturgis arrives at the local parish to talk to new priest David Thompson about the murders.  It kind of makes you wonder why the church was never held responsible before, since Sturgis tells him "You also have standing water on the property, Black Pond. Kids like to skinny dip there at midnight, and sometimes they drown!" But never mind. The problem of the cursed house seems to be nearly solved, as another priest is relocating there with his family (apparently they're not Catholics), but before he can even arrive, a different priest is gutted at the house when a saw blade goes spinning off its base, embeds itself in his body, and keeps spinning until he's dead.  Sturgis suspects Arlen, the property's crazy-looking caretaker, for the murder of the two boys, but when he sends his partner to follow Arlen down to the pond, a witchy black hand with long fingernails reaches up out of the water and pulls the cop under. Yes, apparently driven by the motto of "More is more", the filmmakers insert four murders within the first 22 minutes of "Superstition".
A little girl dressed in white named Mary keeps randomly appearing to people (shades of Sarah Collins!) and the people who see her never seem very curious about who she is and why she's there. Apparently, the freak accident that kills the priest doesn't stop the renovation process, and the Reverend Leahy and his family arrive to move into the house. Yes. After all that, people are still moving into this house. Not only that, the Leahys seem delighted by the filthy pond--one of them refers to it as a "swimming pool", indicating that they have never really seen a swimming pool, ever. One of them even jumps into the green water filled with pond scum and splashes around swimming. In the pond. The pond where a policeman was just drowned, and whose body was never recovered. When one of the swimming girls emerges from the pond with one of the cop's severed hands grabbing onto her ankle, she takes to her bed in shock and instead of getting the hell out of there, Mrs. Leahy says to her husband "George, we HAVE to STAY." These people are all nuts.
This movie is so disconnected from reality, it reminds me of the more nonsensical Argento plots. Not only does the Leahy family still move into a house where the previous tenants were slaughtered and four people murdered in the past week, and not only are we told that local kids continue to neck and skinny dip in Black Pond even though people have drowned there, but there's an extended scene where the youngest Leahy goes missing and Sturgis refuses to allow the parents to help search their own basement. The parents actually go along with it, preferring to sit on their bed and worry about what's going on "downstairs". But the characters are such ciphers that we never have much time to care what happens to them, which gives the movie the feel of a giallo. The pacing is atypical, with many of the murders all occurring within the first hour of the film instead of the other way around. I counted 15 fatalities, 16 if you count when they "drown" the witch (I don't think it counts since she apparently doesn't really die). It's also very well filmed with a number of great sets, and more than a little creepy. The witch is expertly realized, shown mostly in shadows (that is, in her current zombie-ghost-witch form), with her witchy sharp fingernails and all. One great image is when Reverend Leahy is in a dark room and sees the witch's shadow just outside the window, slowly opening the latch. 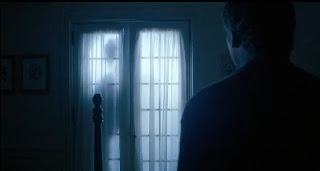 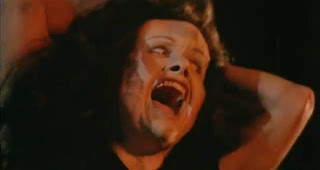 "Superstition" was directed by James W. Roberson, a prolific television cinematographer who has just four directing credits under his belt, so it's no surprise that "Superstition" succeeds mostly in its visual presentation, which is usually interesting and engaging. Roberson keeps the witch mostly off-camera, especially in the beginning, which uses slasher type point-of-view shots when the witch is doing her thing. The music is a strange mix of an original Goblin-esque prog rock score and a constantly repeating interpolation of Berlioz's "Symphonie Fantastique", which doesn't help the movie seem any more original. It would have been better to use it sparingly so the audience would quit remembering "The Shining". One of the more shocking murders in the movie is when the witch holds one of the teenage daughters down on the attic floor and drives a large spike through her forehead, but the strangely inappropriate musical cue going on in the background works against the horror. The plot leaves a number of loose ends hanging, such as the matter of the strange Arlen and his gypsy-like mother; their exact role in the plot is still a mystery at the end of the movie, mostly the matter of why the witch likes them enough to let them live near her pond without being fingernailed to death. I was also confused by what the little ghost girl Mary; she appears at the very end and seems to be an extension of the witch herself, so why was she so busy being all innocent to the people she appeared to throughout the movie? The lack of a decent script pushes "Superstition" way into the realm of the absurd, but this is a plus, as the movie would have been dreadfully boring if it had attempted to be serious. My favorite line of dialog happened when the two teenage daughters had an argument and one slapped the other, saying "Shut your bitchy mouth!"  It's clearly just a threadbare plot intended to string together a series of gruesome death scenes, which makes it a rare supernatural riff on the slasher genre. "Superstition" is an obscure little flick, but if you like your horror cheesy and extra bloody, you might dig it. Just keep your bitchy mouth shut, please. 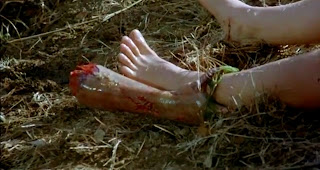 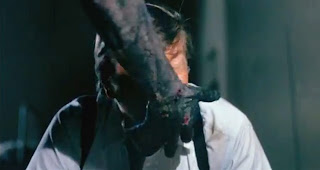 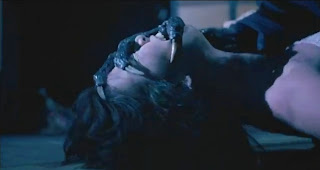 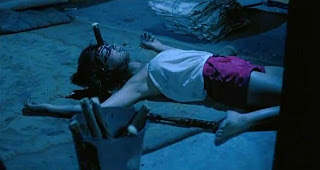 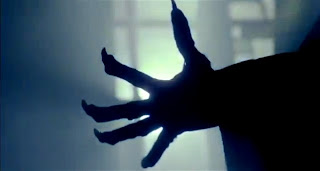 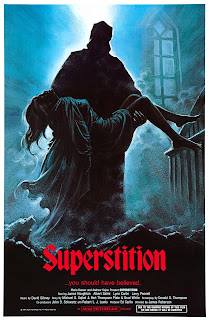 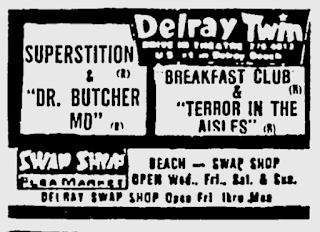 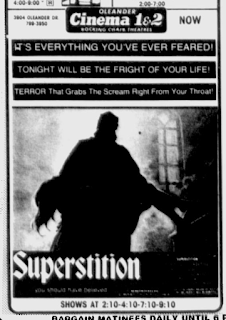 Posted by GroovyDoom at 2:15 AM