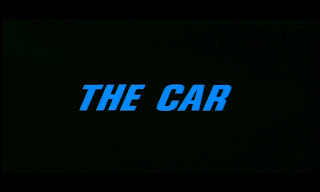 Posted by GroovyDoom at 3:17 AM

Fantastic review! I've been a huge fan of this movie since I caught the second half of it on TV one late Saturday night while flicking through the channels. It's ridiculous but so much fun and like you said, it has some genuinely creepy moments.

I just saw the Car on cable after seeing it in VHS when I was 9 years old in 79-80 one of the first horror movies I have seen. At the time the movie really made an impression on me especially the scene where the car kills the two bikers. Pretty entertaining to watch it now and very very nostalgic. Reminds me of a time that unfortunately does not come back.