Having recently discussed "Howling 2: Your Sister Is A Werewolf Trapped In A Very Bad Movie", and with The Big Day just around the corner, maybe this is a good time to chew on another early 80s sequel that is nearly always hailed as a bad "part 2". I'm talking about "Halloween II: Your Sister Is In the Hospital". Well OK, it wasn't really subtitled that, but it did have its own dorky subtitles like "Halloween II: The Nightmare Isn't Over!" and "Halloween II: The Horror Continues". Let it be known from the get-go that I love, love, LOVE "Halloween II", in all its tacky, cheap, cash-in glory. While it is all those things, it's also scary and very fun, and it's filmed with a lot of interesting references to other horror films. In other words, an orgasmathon for a horror geek.

You can see through "Halloween II" like it was a cheap shower curtain. It's a rather obvious attempt to cash in on a hot property even when the filmmakers seemed to have no idea what they wanted. There is no real story here, and it seems that all anybody really knew was they needed a movie called "Halloween II" to release to theaters. There's something compelling to me about filmmakers making their own cheap ripoff movie. Here was John Carpenter's name (as producer and screenwriter), and Debra Hill as well, and Dean Cundey filming it. Jamie Lee was back, and so was Donald Pleasance, and Charles Cyphers. Nancy Loomis even made a cameo as Annie's corpse, as well as a voice on the phone.

In a bold move, "Halloween II" kicks right in with the final scene of the previous movie. I'm sure there have been other films like this, like a couple of the early Frankenstein films, but I'm at a loss to come up with any other examples. It's an honest approach though, since second-parters often pretend they've got something new to say, when really it's a retread of the first film that everyone is after. "Halloween II" knows this already, and it turns up the volume so loud that you can almost hear the script meetings. There are more murders, and they're all much more gruesome than the first film. In the first ten minutes, there's already more blood than the entire first film. An ambulance comes to take Laurie away from the scene of the crime and whisks her off to the Haddonfield Memorial Hospital (or Haddonfield Memorial Clinic, the film can't make up its mind). Nobody ever stops to think that she was the near-victim of an escaped maniac, and that he might actually continue stalking her, not even Dr. Loomis, who goes berserkers. At one point he chases a boy wearing a white mask out into traffic, where the boy is hit by a car and then fried alive in a collision, but nobody seems to be concerned with that after the initial shock wears off.

Michael Myers, aka The Shape, walks through Haddonfield like a zombie, spooking Mrs. Elrod (Lucille Benson from Paul Bartel's "Private Parts"), who only wants to make her husband Harold a sandwich. He also attacks some random girl named Alice and carves a jack-o-lantern out of her neck. Poor Alice! Not too long after that, we say goodbye to Sheriff Brackett, the first wakeup call that this is NOT "Halloween" after all. He identifies Annie's body and then disappears forever, leaving Hunter von Leer to take over as the resident overacting lawman.

"Do you feel like someone's watching us, Mrs. Alves?"
"It's just that rep from the HMO again. Don't look at him."

Then the movie brings on a small group of nurses, orderlies and doctors for Michael to slash. Nurse Karen seems like a nice girl, but proves she's dumb as a box of rocks by not only arriving 15 minutes late for work, but allowing her EMT boyfriend to convince her to screw him in the whirlpool therapy tub. When a mother brings her young son into the ER with a blood-gushing wound in his mouth from a still-embedded razorblade, Nurse Jill tells her calmly that the doctor can't see her son right now and tells them to wait in another room. Another hospital drone can't even figure out how to use a walkie talkie. Poor Laurie is all but forgotten after a drunken doctor gives her a sedative and stitches up her shoulder. After enough people are skewered, scalded, strangled, and struck over the head, Laurie finally gets to snap out of her drugged haze and try and recreate some of the chase scenes from the first film. It's not exactly a breakthrough idea.

But I love this movie anyway. Although I couldn't express it at such a young age, I related to the film immediately when I saw it in 1981 as an 11-year-old horror geek. It was intended to make money, and it did so by aiming squarely at the fanboy element and giving us the chance to pretend the first film never ended. Watching "Halloween II" today, I am struck by mainly two things: the music and the inventive camera work. The overall silliness is hard to overcome, especially the increasingly outrageous climax, but "Halloween II" is best as a visual experience. The movie has a very sinister look to it, with deep, blue-black colors and nighttime dread. There are a number of shots shamelessly recycled from the original, but they still work, including one where The Shape is glimpsed through several panes of glass behind two unsuspecting characters. I also live for the brief, creepy moment where The Shape is standing right behind Mrs. Elrod in her kitchen and she doesn't even know it.


The way the frames are so carefully imagined has a lot to do with the film's success, too. One creepy death scene has the young EMT Jimmy wandering the halls looking for any signs of life when he stands outside a dimly lit operating theater; you can just barely see the hint of something white lit up inside, thru the small viewing window in the door. When he closes the distance, he finds the body of Mrs. Alves in seemingly peaceful repose, all of her blood drained out thru an IV tube. The color composition is amazing; the hint of the white uniform leading to the discovery of the body, glowing brightly in a dark room, leading to a huge puddle of bright red blood on a black tile floor.

The movie has a much more cruel edge to it than the previous film; it's not only gory, but downright brutal, such as one moment where The Shape grabs a young assistant from behind, inserts a hypodermic needle all the way into her temple and injects air into her brain, killing her. The pointless, 80s-slasher murder at the very beginning also is a sign of the times. Many of the film's best sequences, and perhaps the entire film itself, would not work at all without the familiar score by John Carpenter. The themes are all the same as the original movie, except they travel through the looking glass and are rendered in an eerie synth format that really gets under my skin.

Constant references to Italian directors like Argento and Bava keep things lively, too. The bright colored lighting recalls "Suspiria" in a number of scenes; Loomis and Marion have a conversation in the back of the Marshal's car, their faces illuminated like Suzy Banyon's when she took her cab ride to the Tanz Akademie. Laurie has to shimmy through a small indoor window near the ceiling, and encounters a hospital basement that's as improbably garish as the weird attic that Sarah found herself trapped in. Most of this is stuff Carpenter did already, but there's a distinctly European feel to "Halloween II", which has a lot of giallo-esque scenes where you see the action from the active point of view of the killer. It's got a life of its own, and it's a lot more dark than the original film, which had a number of daylit scenes. Not so with "Halloween II"; by the time you see the gray light of morning, it's all over. The final image of Laurie alone in the back of the ambulance is terrifyingly bleak.

"Halloween II" gets a bad rap, because yeah...it's a step down from "Halloween". But it's a curiosity, an anomaly, a forced continuation of a previously self-contained story that ended right about the time the first movie ended. It starts off similar to the first film and then derails until it's a jagged, reckless juggernaut coming straight for you. The fact that the movie never quite gels into something as effective as the original "Halloween" doesn't matter to me so much. Once you can accept that it's not the original film, "Halloween II" has a lot to offer on its own terms, both as a bizarre imitation and its own cruel beast.

Because, even if the temperature SHOULDN'T go up over 100 degrees, you still have to create the mechanism so that it's possible to turn it up so high it will peel flesh from your body. RIGHT? 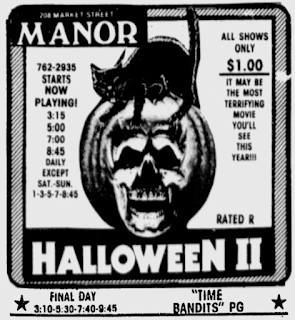 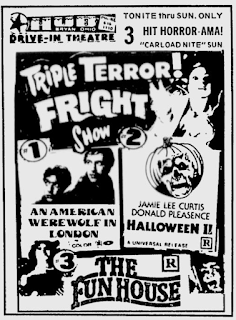 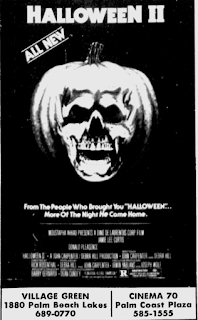 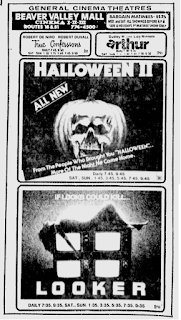 i too love halloween ii. i love it for all the same reasons you do.

but there is no excuse for halloween iii - which i love but it really really bad.

Yeah, but "Halloween III" has something that none of the other movies have. Tom Atkins's ass.

Really glad someone else recognizes the giallo influences in this flick, which has also been a favorite of mine since I was 10 or 11 (I'm 22 now). The shot of the blood dripping from the iv along with a frame full of deep red blood especially stand out. The compositions and the use of shadow also (to me) directly recall a lot of old italian films. It's a sequel that deserves recognition if only because it feels like the director actually had a vision, unlike most slasher sequels, and the giallo influences give it a touch of class that most giallo pics have and most slasher sequels (and slasher films in general) lack. Beautifully shot, I'll always think of it as an American Argento film, with the manhunt angle, mystery of the killer, and the brother-sister revelation something I feel would totally be in a giallo picture. Anyway, if you're interested in discussing this more (which I am) email me at joshuachamberlin@pcad.edu