By today's soulless standards, the glorious 70s were mostly tacky and cheap, but oh did they have style to burn. Never have I seen this represented in a horror film quite as well as I have in an obscure little gem I just discovered. I intend to ramble on for a moment or three about a repulsive, seductive, and absolutely essential 1973 descent into insanity titled The Baby. 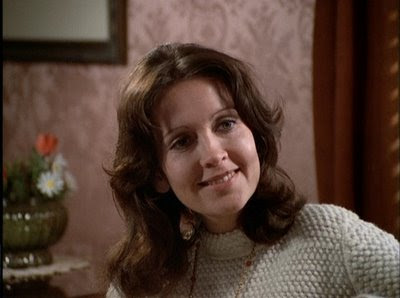 Ann Gentry (Anjanette Comer) is a pretty social worker who takes on a new case when she visits the oddball Wadsworth home. Mrs. Wadsworth (Ruth Roman) lives with her two strange daughters, Germaine (Marianna Hill) and Alba (Susanne Zenor). There's also a son in the home: the 21-year-old Baby (David Manzy). There is no man in the home, and Mrs. Wadsworth doesn't seem to have a very high opinion of them. Well, what am I saying, Baby is a man if he's 21, right? Well, no. Baby is kept in an infantile state by the rest of the Wadsworths, who dress him in diapers and oversized baby clothes, make him sleep in a crib, and never teach him to talk or walk. Although Ann doesn't catch onto it right away, the family inhibits his development through negative reinforcement, such as zapping him with a cattle prod whenever he does something that a baby wouldn't do.

Bringing up Baby.
Ann immediately accepts Baby's situation, as does seemingly everyone else in the movie. 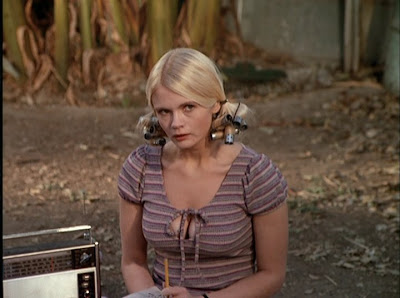 Nobody ever seems to stop and say "Hey wait a minute, why is this man acting like an infant?", a fact that becomes twenty times more astonishing after a scene where the strange family has a house full of party guests who also accept the fact that her 21 year old son acts this way. Ann is no different, as she talks baby talk to him and raves about how 'cute' he is. Actually, he is extremely creepy and looks like he's acting more like a dopey dog than a baby. Mrs. Wadsworth is a tough lookin broad who reminds me a lot of Suzanne Pleshette, especially when she talks. At first she seems to like Ann, but when Ann starts hanging around a lot more than she has to, the whole family gets suspicious of her. 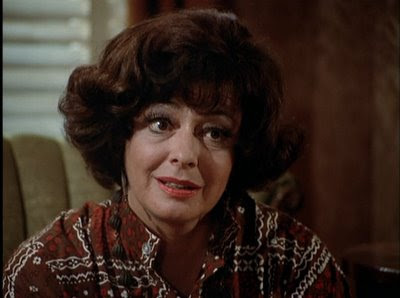 Ann herself isn't exactly playing with a full deck, it seems. She lives in a big, beautiful house with her mother-in-law, and even Germaine wonders how Ann affords her beautiful wardrobe on a social worker's salary. Her husband is nowhere to be seen, and Ann can't seem to figure out if he's alive or dead, since she tells different people different things. When Ann starts talking to Mrs. Wadsworth about putting Baby in a school where he might learn how to develop past the infant stage, she immediately pulls the plug on Ann, calling her supervisor and getting her thrown off the case. Ann reacts with her own fury, declaring war on the Wadsworths and vowing to 'rescue' Baby.  You might think you can see the twist ending coming, and you may be on the right track, but I doubt you'll totally get it until the weird, wonderful and unquestionably bizarre final moments of the film. 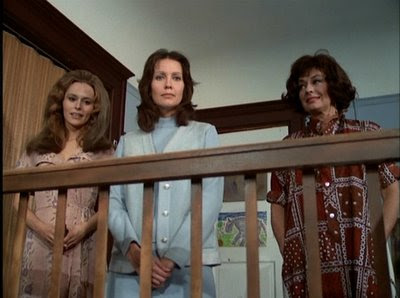 I guess The Baby is technically a horror movie, although it's definitely the psychological type as opposed to more typical horror elements. There is a disturbing tone running through the whole thing, including themes of incest; not only does a babysitter wind up in a sexually provocative situation with Baby, Germaine is seen going into Baby's room and getting into bed naked with him. There are a few scenes of graphic violence, but they aren't going to please any gorehounds. The Baby reminds me a lot of one of my other favorite 70s Doom flicks, Don't Look In The Basement, crossed with What Ever Happened to Baby Jane. There are elements of other movies here too, including a party scene that echoes Beyond the Valley of the Dolls with its crazy lighting and far out music.

Beyond the Valley of the Baby

Aside from having a great script, The Baby also benefits from a solid cast full of cult movie favorites. Fans of obscure horror films will recognize Marianna Hill from Dead People (aka Messiah of Evil). Alba is played by Suzanne Zenor, and some of you might recognize her from the 70s TV revenge comedy The Girl Most Likely To. I'm not sure of the actress's name who plays the babysitter, but she's a dead ringer for Joy Bang, also from Dead People. Michael Pataki appears as a swingin' guest at Baby's birthday party, and Ruth Roman is absolutely showstopping as Mrs. Wadsworth. She's as scary as Mommie Dearest, and you wouldn't want to cross her, would you?

The sets and art direction are top notch. Kitsch is king in The Baby, with all sorts of wild period clothing, furniture, and lighting dominating the movie. The music is memorable too, coming off as cheesy at first, but really getting under your skin the longer the movie goes on. The uncomfortable themes in The Baby might turn off some viewers. But if you're in the mood for something really strange that you've never seen before, you can't go wrong with this one. It's absurd. It's insane. And it's absolutely classic, unadulterated 70's Doom!!
Posted by GroovyDoom at 1:56 AM